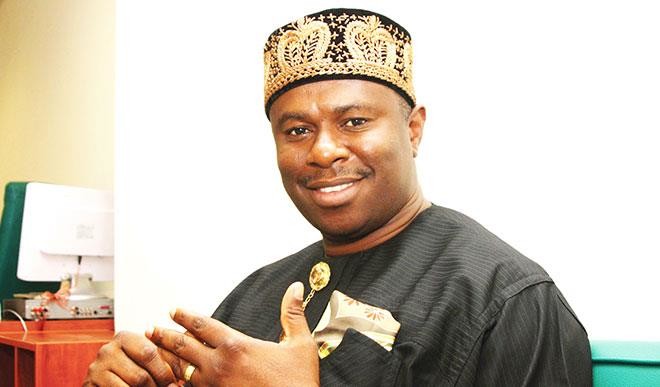 Dr. Dakuku Peterside is the DG of NIMASA. He is one of the new generation politicians who has shown that a lot can be achieved in public service, with Youth, Vigour and Vitality. On March 10, 2016, he was made DG of NIMASA. Since then, a lot has changed about that Federal government parastatal.

Dr Peterside, was the All Progressives Congress (APC) candidate in the April 11, 2015, governorship election in Rivers State. And his appointment made him the 5th Director–General/Chief Executive of the Nigerian Maritime Administration and Safety Agency (NIMASA).

Many don’t know Dakuku, who is the Amaopusenibo of Opobo kingdom. He is a cool-headed, easy-going, charismatic and disciplined leader. He is an administrator and a gentleman. And he brought to his new job, an array of experience; political sagacity, integrity, solid academic  and administrative background. He has a Bachelor’s degree , two master’s degree including an MBA in Business Administration, a doctorate degree in Management Science and certificates in Leadership and Project Management from top institutions around the world. In the last 2 years, Peterside has lifted NIMASA from the mess it was in before his appointment.

He brought to bear on his new job, his integrity, exposure and purposeful leadership, He has made NIMASA a disciplined and friendly environment for both local and international players in the maritime sector. Not only has Peterside steered NIMASA away from the corruption which has plagued the foremost maritime agency for long, he would as well, steer it away from controversy, ineffectiveness, embezzlement of funds, unwarranted political intrusion, ethnic rivalry, among other mind-boggling issues. 2 years down the line, those who do business with NIMASA are already saying positive change is obvious.

Having been in the House of Representatives for 4 years, where he served as the Chairman of the very important Petroleum  Resources (Downstream) Committee and other important committees  such as Anti-Corruption, National Ethics and Values; Drugs, Narcotics and Financial Crimes; Co-operation and Integration in Africa; Electoral Matters; Industry; Communications and Works; Peterside is the right man for the highly challenging office at NIMASA.

A man of integrity, Dakuku does not discriminate. He takes everybody as his own. He is also a man of peace. He is a good example to come out of the Rivers governorship election, which did not go in his favour even though he won at both the tribunal and the Appeal Court. Upon Supreme Court’s ruling in favour of Governor Nyesom Wike, all Dakuku did was to appeal to his supporters to remain peaceful. He never said because the judgement was overturned, the heavens would fall. No!

When he assumed office 2 years ago, NIMASA was an agency with no direction and focus beneficial to Nigeria. Though the agency raked in money for the country, its effect and reason for creation had not been achieved. But within a year in office, NIMASA started realising its objectives with the new strides brought to the fore-front by the DG, who insists it is not going to be business as usual. When Peterside came in he revealed that the reforms he will engage in at the agency are in line with the ‘change’ agenda of the Buhari administration, which is committed to the diversification of the nation’s economy. “On the public perception of NIMASA over the years, the agency under my leadership will completely change the narrative from the negative perception of corruption, inefficiency and abandonment of its core mandate to that of a Maritime Administration that is alive to its responsibility, intent on making Nigeria the preferred destination for maritime activities in Africa”, he stated when he came in. With this mind-set, Peterside began with the change agenda in NIMASA and his strides cannot go un-noticed.

One of his major achievements is the total rebranding of the agency. According to him, the need to rebrand NIMASA was borne out the fact that the agency must align with other foremost maritime administrations in the world.

Another area of achievement of his administration is the promotion of over 300 staff members of NIMASA shortly after he came in. People, who are familiar with the agency will know that several staffers and directors had stagnated for a decade. With his promise to rebrand NIMASA, Peterside came with a mandate to introduce a completely new work ethics and energy in the agency. “We had the mandate from the President through the Honourable Minister of Transport to go and reform NIMASA. This we have initiated by first of all knowing that NIMASA cannot work under the defunct structures of JOMALIC and NMA. We also noticed that NIMASA has resourceful members of staff, but needed motivation and this we have started by re-orientation of the staffers”.

Since the introduction of this new works ethics, many can testify to the fact that professionalism has grown within the capacity of the staff and new work ethics are fast changing the fortunes of the agency with better service delivery. Taking into consideration the importance of hi-tech, the Peterside administration instituted a medium term strategy through digital transformation to hasten processes at NIMASA. The process allows stakeholders to  register their vessels and transact all other businesses digitally with a click of a button on their laptop.

Other achievements include the repositioning of Nigeria in the international maritime politics. Nigeria is said to be out of the Council at the International Maritime Organization, IMO, for over half a decade thus relegating the country at the international politics in the maritime sector.

City People recently dug into his activities and found out how Peterside has taken NIMASA to the next level. Last year Dr. Peterside, recounted his achievements since he assumed office in 2016 and rated his performance high with readiness to improve on it where necessary to take the Nigerian maritime sector to a greater height.

The new NIMASA brand was unveiled by President Muhammadu Buhari on 20th April, 2017, which coincides with the hosting of AAMA. It’s part of our concept to inject a new dose of energy into the NIMASA brand.”

The DG said NIMASA, being a regulatory and enforcement Agency; it’s set to ensure that it accomplishes its core mandate in a way that serves the best interest of Nigerians within a dynamic and complex economic environment.

At his maiden press conference Dr. Peterside articulated issues and reeled out benchmarks by which his tenure would be judged at the end of the day.

In what he termed his 3 cardinal objectives of NIMASA, Peterside stated that the agency hoped to target restructuring, reformation and repositioning. According to him, “we came into NIMASA with one cardinal objective upon which all other objectives are subsumed. That one objective is to restructure, reform and reposition NIMASA.” He explained that at a retreat for members of staff, it was agreed that there would be 5 pillars or structures to guide the achievement of the objectives. Pillar number one involves Survey, inspection and certification transformation initiative. Pillar number 2 is what he called Environment, security and search and rescue initiative, while pillar number 3 has to do with capacity-building and promotional initiative.  Pillar number 4 is the agency’s digital transformation strategy, while pillar number 5 deals with what the DG called structural and cultural reforms. “These are the 5 pillars to help us achieve that single objective we have defined which is to restructure, reform and reposition NIMASA,” Peterside said.

Part of NIMASA’s core mandate as enshrined in the NIMASA Act of 2007, the DG said, was to ensure that vessels that ply Nigeria’s territorial waters were safe and secure. The safety and security of vessels meant that individuals, who man the vessels were qualified for the job. It also meant that the vessels themselves were also seaworthy, and that they could convey goods that were meant for their sizes.

In addition, in terms of professional activities, NIMASA intends to get Nigerians to be more interested in owning and setting up shipbuilding facilities and ship dockyards as well as dry- docking facilities. That is one area yet to receive needed attention in line with the cabotage regime, which presupposes that indigenous operators must have vessels built in Nigeria, registered in Nigeria, manned by Nigerians and owned by Nigerians. Peterside observed that in the area of ship building, Nigeria has not accomplished much. “In the area of capacity building and promotional initiatives, we intend to promote Nigeria as the most important and the most relevant destination in Africa for ship building and ship repair facilities. In addition to that, we are also promoting for our people to set up ship breaking facilities and plants in Nigeria. In many countries, emphasis is on 100 percent indigenous ownership of vessels trading in the local areas. That is the direction NIMASA is headed, the DG assured. “If we train our people, I am sure that even the few vessels being manned by foreigners will be taken over by our own trained personnel in three to four years’ time by which time we will have over 90 percent vessels manned by Nigerians. That’s where we are going.”

By October or December 2016, nobody was dealing with manual receipts, debit notes and manual demands anymore as all processes had been automated, Dakuku said.  What has automation achieved? It enhances, transparency, reduce corruption and human manipulation. Human contact during transactions exposes somebody to corruption, the DG observed.  “But if you stay in your house, sitting in front of your computer, pay your fees, generate your receipt and everything, you don’t need to come in contact with anybody. So, if you see our enforcement officer, you show them your receipts, and that’s all. You don’t need to come and stand in NIMASA office for four hours just to pay your dues.” In line with current international best practices, NIMASA’s processes have been automated.

Peterside assumed the position at a time the agency was facing a myriad of problems ranging from high level corruption, piracy and man power shortfall among other problems.

Another major challenge the MIMASA DG faced in his first year in office was the issue of staff promotion.

Before he came in promotion to director cadre had stagnated for over a decade. The new management broke the jinx and over 300 staffers of the agency benefited from promotion exercise.