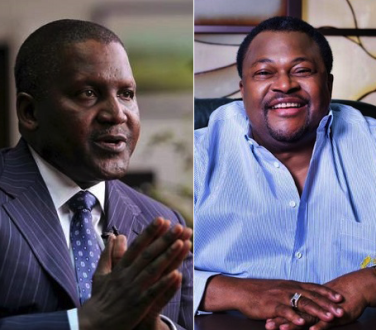 In the American business magazine’s 13 richest black people on earth list, which has four Nigerians on it, the president of Dangote Group clinched the first position with a fortune estimated at $10.9 billion.

According to Forbes, Dangote’s fortune was made from sugar, cement and flour production. He is also on the verge to launch a private oil refinery in Nigeria which will have a refining capacity of 6500,000 barrels a day and is expected to reduce the country’s dependence on oil imports.

In second place was Adenuga, founder of Globacom, a Nigerian mobile telephone outfit, with an estimated fortune of $9.1 billion.

Aside from being the founder and sole owner of Globacom, which has more than 40 million subscribers in Nigeria and neighboring African countries, Adenuga also built his fortune in oil. He owns Conoil, one of Nigeria’s first indigenous oil exploration companies in the early 90s.

Third on the list for Nigerians is Abdulsamad Rabiu, founder of BUA Group, a Nigerian conglomerate with interests in sugar refining, cement production, real estate, steel, port concessions, manufacturing, oil gas and shipping. He is worth an estimated $1.6 billion.

Folorunsho Alakija, Nigeria’s first female billionaire and the founder of Famfa Oil, also made the list with an estimated fortune of $1.1 billion.

Below are names of the 13 richest black people on earth:

READ ALSO: WHAT BUHARI MUST DO TO TAKE NIGERIA’S ECONOMY TO THE NEXT LEVEL – PROF STEPHEN