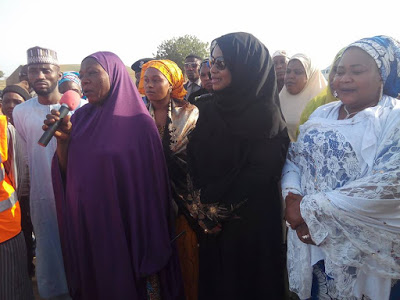 Girls in Adamawa have urged the governor’s wife, Hajiya Lami Fintiri, to sponsor an early marriage prohibition bill to stop parents from marrying out their young daughters.

The girls made the call on Friday in a communique they presented to the governor’s wife after a rally to mark this year’s United Nation’s International Day of the Girl.

Reading the letter on behalf of the girls at Government House, Yola, Ms Fatima Ismaila, said the bill became necessary for the girls to have equal opportunity to acquire education.

“We need you to sponsor an early marriage prohibition bill through the state House of Assembly that will stop our parents from giving us out for marriage at least until after completing our secondary education.

“We need equal opportunity to access basic and quality education, please tell our parents to send us to schools,” she said.

The girls also called for the recruitment of more female teachers and the need for separate toilets in schools.

They also seek protection against rape and other forms of child abuse in the state.

“We are confident in you and his Excellency’s ability to address our concerns and we promised you today ma, we will try our best in studies and character to become role models like you and make Adamawa state a girls friendly state,” she said.

Responding, the state Mrs Fintiri, represented by the Permanent Secretary, Ministry of Women and Social Development, Mrs Justina Patrick, assured the girls of the administration’s commitment to education, particularly that of the girl child.

“When you are educated you will know your right and be in a better position to protect it,” she said.

She urged for the review of some cultures that suppressed women from contributing more effectively in building the society, adding that the society must speak loud against rape and other violence against women and other vulnerable people in the society.

Jutum, who reiterated the sustained support of UNICEF to Adamawa, said that the international day for the girl child was meant to promote girls’ human right; highlights gender inequalities and address the various forms of discrimination and abuse suffered by girls.

READ ALSO: THERE ARE TOO MANY QUACK DOCTORS IN ONDO STATE – MINISTRY OF HEALTH CRIES OUT