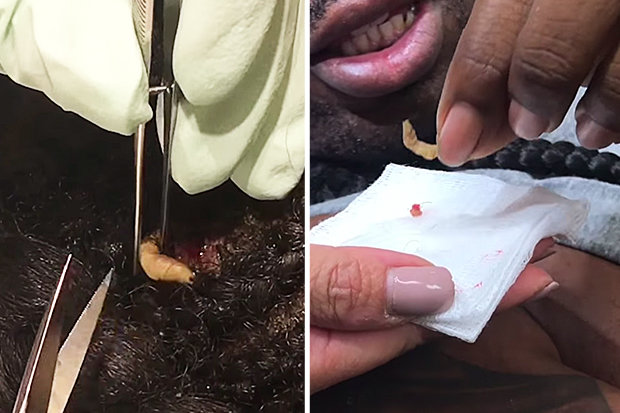 A really shocking footage has captured the moment a man had a horn removed from his head in surgery that even baffled the doctor involved.
According to Daily Star UK, she is used to dealing with cysts, spots and giant eruptions of pus but Dr Pimple Popper’s latest encounter left even her speechless.
The California skin specialist – real name Dr Sandra lee – is a massive YouTube sensation thanks to her fascinating, but disgusting, spot popping videos.
She is usually unflappable, but when a man walked into her surgery with a horn growing out of his head, she had no idea what to do with it.
The disgusting clip begins with the doctor numbing her patient’s head.
She then takes tweezers and small nail scissors to cut away at the bizarre horn.
It comes away in one piece, with a shocked Dr Lee saying: “It’s like a finger on you.”
The horrified man looks at the removed growth and asks: “What is that?”
Dr Lee responds: “I don’t know, it’s like a nail coming out of you. That is crazy looking.”
In a caption alongside the clip, the skin doctor says she is waiting for test results to confirm exactly what the growth was.
“So far calling this a cutaneous horn,” she wrote.
“Oh my god, looks like a dried up maggot that tried to burrow inside his scalp,” one traumatised viewer commented.
Doctor Horrified as Patient Turns Up in Hospital With a Horn Growing Out of His Head (Photos) was last modified: August 15th, 2017 by Arinze Ago