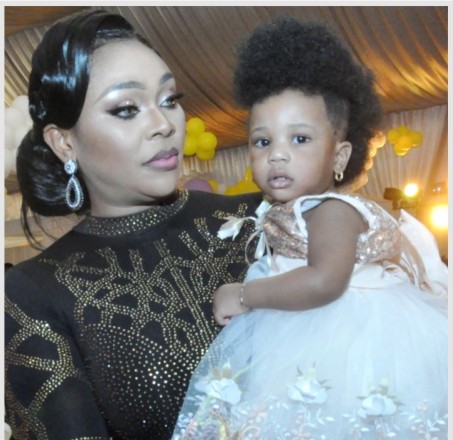 •Gists From Her Baby’s Birthday Bash

It was a memorable party as Ibuere, the beautiful princess of Lekki Big babe, Ehi Ogbebor who owns the popular Sayaveth Interiors and Hotel in Lagos turned one on May 12th 2019. Her mother threw the mother of all birthdays for her and what kept on boggling the minds of many people was how huge the party was for a year-old baby.

Ehi Ogbebor is one of the big babes in Lekki who do not party in small measure. She is known to always throw classy parties and her daughter’s 1st birthday was not an exception. She went all out to give her baby a beautiful and grand birthday which trended on the social media all through the weekend and which is still on the lips on many of the guests who attended the party.

Ibuere wouldn’t have been celebrated less because she was a child of Grace as her mum revealed what she went through when she had her while she posted a picture where her baby was receiving treatment, how her baby was at the ICU unit in a US hospital for weeks after her birth and how God showed up for her daughter to survive the ordeal. She wrote on her page ‘’Where do I start from? this picture says it all, I did not shower or eat for 5 days, watching you fight for your life in ICU unit, you were just 8 days old, my dear adorable daughter, my heart bled, we were so scared, I was going crazy but God took control. You got better and more drama and nightmare came afterwards. I was traumatized for months but your birth and the end of my marriage taught me the meaning of collateral beauty. You are healthy and so loved by many known and unknown, you are the true radiation of joy and laughter. I love you so much my beautiful cheerful child, Ibuere and today I am grateful to God I can finally solely give you a befitting dedication and birthday”.

What do you expect from such party if not to wow you and that was exactly what happened. The hashtag for the birthday party was #iblildisneyparty and that was why everyone who was not at the party had a fun filled time checking pictures and all the side attractions that happened at the birthday party. As early as 2 pm, on Sunday 12 May, many parents with their kids stormed the prestigious birthday venue, Royal oak Event Centre in Lekki and you need not be told that the birthday will be classy and huge due to all the kiddies decoration at the entrance of the hall. All the children who are of different ages were numbered up to 200 and all of them were well catered to.

Even their parents had more than enough at the party. The party kick started with the baby’s dedication which was presided over by Pastors from MFM Church and shortly after, the party was declared opened. It was an evening of unlimited fun for all the kids, money was put on display at the party and the celebrant’s mother, Ehi spared no cost to give her daughter a beautiful party. She must have surely spent millions of naira to give her daughter a birthday party to remember. There were delicious meals which were served all through the party that lasted for about 7 hours, Drinks were unlimited and exotic wines flowed freely. The kids had so many gifts to take home and it was in excess. Professional vendors were at their best, Kiddies Haven took charge of most of all the party side attractions, she decorated the birthday venue. There were different types of kiddies playground, tagged IB boutique, IB ice cream factory, IB candy store, IB Popcorn Corner, IB Waffles and Sweets, IB Nail bar and IB pedicure corner, these were all available to the kids for free.

The gift corner was handled by Vjeonconceptkids, the cakes were numbered up to 10 which was made by different outfits but the birthday cake was made by Doodles cake. IB looked pretty in an ivory colour ball dress made by queenjcouture, her fabric was supplied by George Ruvero designs and her beautiful hair was made by hair essence. Her lovely birthday photo shoot was by posh click while Bisi Daniels production was in charge of the birthday videography. DJ Nana was the official DJ for the day and she got many guests standing on their feet dancing for several hours. It was surely a birthday to remember as many of the celebrant’s mum’s friends all came from far and wide to celebrate her daughter’s day with her. She also looked fabulous for her day and out of her busy schedules, she entrusted the comfortability of her guests in trusted hands especially to her brother who also doubles as her outfit, Sayaveth Interiors and Hotel Manager. Her family all rallied round her and her mum was also the star of the moment as many of her friends stormed the party with her all the way from Benin. The star performance of the day was hip hop star, Kizz Daniel and the mother revealed that Ibuere dances to his songs anytime she hears it. Many big men stormed the party in excess, they sprayed endlessly, as they were spraying naira so were they spraying in foreign currency. They are super big boys and calling them billionaires is simply stating the obvious. They sprayed to the extent that, people were practically dancing on the money.

Big babes were also not left out, they all came out to support their very good friend and mother of the celebrant. They also sprayed the celebrant and her mum endlessly. Spraying bails of naira became like pure water and even some guests had free money to take home from all the largess. Amongst them were Real estate giant, Ned Okonkwo, foremost hotelier and king of nite life, Obi Cubana who sits atop major Cubana nite clubs across the city, Cubana GM, Owerri, Pascal Okechukwu popularly called Cubana Chief Priest was also there, Don Joey, Jowi, Ojayce, and so many other big boys who turned the event car park into a car lot as their exotic automobile littered the entrance of the venue. Amongst the big babes were Halima Ikuku, Delphine Okonkwo, Blessing Osom, Toyin Lawani. Waneka Nkiru Doris, Christianah Diorla, Anita Joseph, Dabota Lawson and others. Also, the celebrant’s mother’s friends were not left out. It was a show of the rich as naira and Dollars flowed like water. They sprayed endlessly at the party.