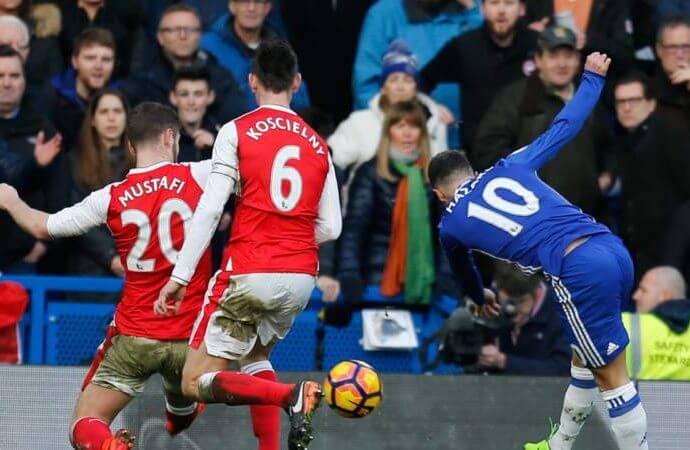 Chelsea and Arsenal played out a draw for the fourth time in as many meetings this season as the first leg of their EFL Cup semi-final finished goalless at Stamford Bridge.

The London teams reconvened seven days on from a scintillating 2-2 Premier League draw at Emirates Stadium but this encounter failed to hit those heights, instead repeating the scoreline from a September stalemate on this ground.

Arsenal boss Arsene Wenger, who watched the match from the press seating as he continued to serve a touchline ban, deployed reported Manchester City target Alexis Sanchez as a second-half substitute and is likely to be the happier of the two managers.

An even first half gave way to sustained Chelsea pressure after the interval, with the visitors struggling to stem the tide after an enterprising display from Jack Wilshere was ended by another injury scare for the midfielder.

Alvaro Morata probed as Chelsea’s attacking spearhead to no avail and Antonio Conte will regret his side’s two best chances falling to Andreas Christensen – a defender who proved ill-suited to the task.

It represented a restoration of pride for Wenger and Arsenal after their weekend FA Cup humiliation at the hands of Nottingham Forest and they will welcome their rivals to north London in two weeks’ time with hopes of a fourth domestic knockout cup in five seasons firmly intact.