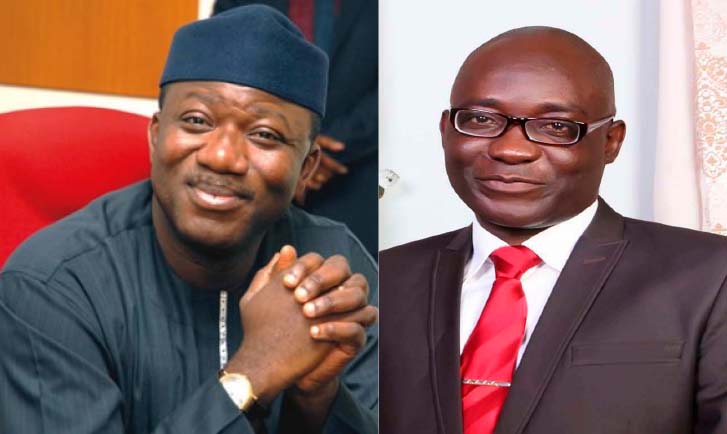 Democracy is basically the right of the governed to elect who governs. The people of Ekiti State, Southwest, Nigeria, would troop out on July 14 to elect who’ll govern them for the next four years. Over 30 candidates are running, but the election is ostensibly a two-horse race between Dr. John Kayode Fayemi of the All Progressives Congress (APC) and Professor Kolapo Olusola ‘Eleka’ of the Peoples Democratic Party (PDP).

This piece sets sight on foretelling the outcome of the election. Before proceeding, the below-average logical reasoning ability of the Nigerian political class makes some clarification necessary. Foretelling an election outcome doesn’t mean the pundit have access to one sacred information, rigging plot, or the election winning strategy of any candidate. Assessing the strengths and weaknesses of candidates to predict who’ll emerge is a common practice in developed nations. This doesn’t mean the pundits are compromising the electoral process or influencing the election results. Ekiti people have already decide who they’ll cast their votes for before now and nothing – not this piece – can easily change their mind.

It is also necessary to clarify that predictions not coming to pass doesn’t mean the pundit’s forecast is fictitious. Election in Nigeria goes beyond voting and counting; it is usually a battle to retain or regain power at all cost. Political parties persistently decimate each other and manipulate the electoral process. The strongest candidate is often declared winner, not the peoples’ choice. Operating in a different way, pundit’s share their verdicts after a thorough assessment of the candidate’s political strategy, leadership capacity, antecedents, manifestoes, structure, acceptability etc.

The Ekiti election is a battle of interests, relevance and political survival. The newly selected National Chairman of the APC, Comrade Adams Oshiomole, wants to prove his competence by winning Ekiti. The APC seeks to gain total control of the southwest region by winning Ekiti – the only state being governed by the PDP. Ekiti also determines the political permutations of 2019 and beyond. If APC wins, the presidency would treat the Southwest like a newly wedded wife in order to harvest votes for Buhari in 2019. Bola Tinubu’s negotiating power for 2023 presidency with the North would rise steeply if APC succeeds in Ekiti.

The Ekiti state governorship election is a political boxing rematch between Fayemi – an ex-governor seeking reelection – and Ayodele Fayose: an incumbent governor seeking to install his deputy, Olusola, as successor. In 2014, then candidate Fayose defeated the then governor Fayemi across the entire 16 local governments of the state. Controversy however emerged when an army officer, Captain Sagir Koli, and PDP chieftain, Dr Tope Aluko revealed that the then government of ex-president Goodluck Jonathan aided Fayose’s victory with financial and military support in 2014. Power has changed hands at the center and Fayemi now have the federal backing Fayose once had. Would Fayemi use the federal might against Fayose and his candidate?

The July 14 election is a referendum on Fayose’s popularity in Ekiti state. Fayose chance of becoming the PDP vice-presidential candidate in 2019 is high if he wins Ekiti for the party. This may unfortunately not be his lot as the APC would do all it takes to decimate him. His overconfidence, uncouth orations and vicious attacks on President Buhari has made him one of the political enemies that would be hounded before 2019. Fayose would languish in anguish after leaving office. The Buhari government would ridicule and persecute him. He would also be arraigned for allegedly using the state’s fund and the military to manipulate the 2014 Ekiti governorship election.

Fayemi hopes to repeat the history made by Fayose – deposed but later returned to office. His victory largely rests on his ability to resolve the shortcomings that made him lose power in 2014. Fayemi’s relationship with the civil servants, artisans, transport union members and teachers is not too cordial. He incurred the teachers’ wrath when his government threatened to sack those presumed incompetent and unqualified.

The fear that Fayemi would most likely abort Fayose’s stomach infrastructure handouts might make him lose again. During his first term, Fayemi was visionary and futuristic, initiating development projects, but Ekiti people want something else. They want food on their table; they want someone that understands the plights of the grassroots; someone who can rock the streets with them; someone who can give them the little things they can at least survive on now. Fayose incidentally gave them their desires and they elect him governor.

Another minus for Fayemi is the popular perception that would be running an elitist government and the state’s resources would be controlled by the Southwest political lords. The perception that Fayemi is Buhari’s boy could also work against him. The fear that the state’s anti-open grazing law could be abolished and Ekiti land awarded as a cattle colony to herdsmen might make the electorates vote against Fayemi. APC’s performance at the center is also not convincing enough that the party has what it takes to transform Ekiti.

The arbitrary use of federal might could work against Fayemi. If the rumor that INEC’s ICT department has preload card readers and falsified results to declare Fayemi winner is not well managed, the people can revolt against him by voting en-mass for the PDP. The security agencies would also have a tough time managing crises if the mass reshuffling of police officers is to compromise the election for Fayemi.

Fayemi’s ability to reconcile with the 32 aspirants he defeated at the party’s primary largely determines his winning. The 32’s financial, human and material resources would significantly boost Fayemi’s chance of returning elected. Unfortunately, many of the 32 are still aggrieved and do not genuinely like Fayemi; they see him as a proud and cunning being that always try to outsmart everyone. The fear of being persecuted by the federal government is what still keeps most of them in the APC. Fayemi may lose if the aggrieved members of his party are not calmed and pacified to throw their weight behind him.

Fayose’s arrogance and imperiousness would affect Olusola. The Ekiti state PDP is monopolized by Fayose, who would not allow justice and fair play in the daily running of the party. The imposition of Olusola as governorship candidate has frustrated notables like Prince Dayo Adeyeye, Senator Fatimah Raji-Rasaki and other bigwigs out of the party. This would definitely dwindle Olusola’s support base and chance of winning the election.

Nonetheless, the voting arithmetic in Ekiti favors Olusola. Fayose strategically picked Olusola from the southern senatorial district that has never produced a governor. Olusola’s running mate, Mr Kazeem Ogunsakin, 39, is the former chairman of Ado-Ekiti local government and son of the state’s former Chief Imam. Olusola and Ogunsakin’s hometown, Ikere and Ado-Ekiti, have the largest number of registered voters in Ekiti State. PDP would sing victory songs if they win these areas by landslide. This would however not be easy as Fayemi’s running mate, 75-year-old Chief Bisi Egbeyemi is an influential Ado-Ekiti indigene.

Olusola would reap the gains of Fayose’s cordial relationship with the grassroots. Fayose initiated an uncommon style of governance in Nigeria. He will abandon his fleet of exotic cars and opt for a ride on okada. He regularly hangs out at spots other governors would not even near. He made the poor his friend and the street his second home. He makes the masses feel his government is theirs. Majority of the low and middle class population in Ekiti sees Fayose as their own and would most likely vote his choice candidate, Olusola. The APC has dismissed Fayose’s acceptance in the grassroots. The party argues that Fayose’s exploitation of the poor’s vulnerability for political gain and media hype would not earn Olusola votes.

The Ekiti election is going to be a very tight contest. The APC is determined to end PDP’s reign and Fayose has vowed that PDP would continue ruling Ekiti under Olusola. Let’s assess the candidates’ chance based on the factors that determines the winner of a governorship election in Nigeria.

Campaign outreach: both candidates campaigned massively across the length and breadth of Ekiti. Money: both candidates have strong financial strength. Power: Fayemi has federal might, Olusola has the state governor’s backing. Education: both candidates are well read; Fayemi holds a Doctorate, while Olusola is a Professor. Religion: both candidates have balanced the Christian-Muslim equation; Manifesto: Both candidates have no clear-cut programs, their campaigns were avenues to defame one another. Civil service votes: Fayemi owed workers salary before leaving office and Fayose is owing months. A significant portion of the over 50,000 workers would most likely vote for Fayemi, but teachers would in all probability vote for Olusola.

Ethnic loyalty votes: Olusola and his running mate’s constituency have the second highest and the highest number of registered voters respectively. The security agencies: they would presumably favor the federal government’s candidate – Fayemi. But then, the APC stalwarts should be mindful that political arrests and intimidations at this moment would only generate voter’s compassion for the PDP. The alleged police harassment of Fayose is a booster for the PDP as it would earn his godson, Olusola, some sympathy-votes.

Grassroots support: Fayose’s overwhelming popularity among the poor majority would earn Olusola a substantial amount of votes. The largely populated poor who are beneficiaries of Fayose’s food distribution (stomach infrastructure) would most likely vote Olusola in order to continue getting the largess. The elites: majority of them would vote for Fayemi, but a major issue to be considered is that they are not as many as the poor. Some elites are apolitical and don’t vote.

The informal sector and the less educated population – artisans, traders and transport workers: this array of persons – that vote and stand by their votes – would most likely vote for Olusola because they see his godfather, Fayose, as pro-masses. The transport workers refusal to convey people to Fayemi’s campaign rally on 10 July, 2018 is a pointer that they are supporting PDP’s Olusola. General perception: Ekiti people know Olusola is Fayose’s stooge but might prefer to vote him than Fayemi – a Buhari loyalist that’ll most likely convert their ancestral lands into cattle colony for herdsmen. Political vengeance: rather than lose, the ‘powers-that-be’ may install Fayemi to avenge the 2014 Ekitigate scandal.

All winning indices considered, PDP’s Olusola would predictably get the highest number of votes, but APC’s Fayemi could be declared winner. Protests would emerge after the election and the election tribunal would be flooded with petitions. 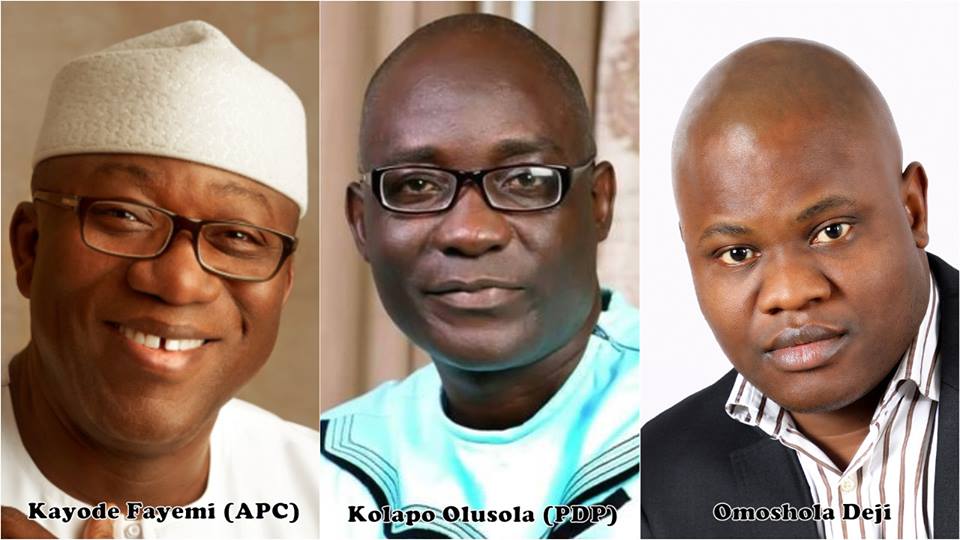 *Omoshola Deji is a political and public affairs analyst.