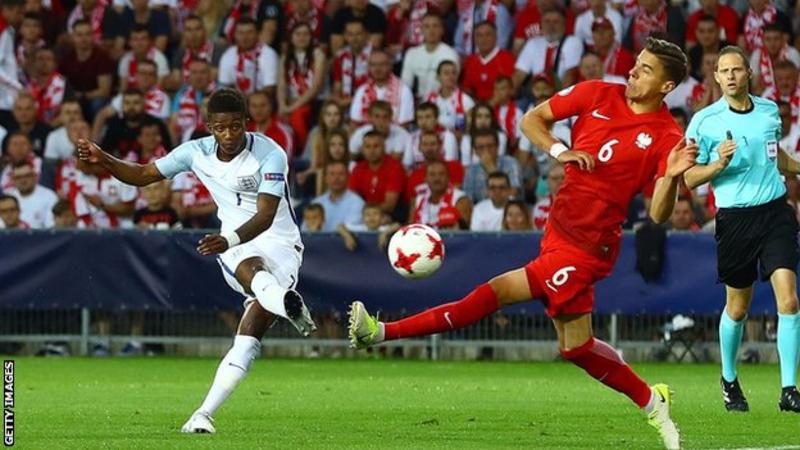 England reached the semi-finals of the European Under-21 Championship for the first time since 2009 after comfortably beating 10-man Poland to finish top of Group A.
Demarai Gray opened the scoring early on with a long-range effort before substitute Jacob Murphy tapped in.
Poland rarely threatened and had defender Jan Bednarek sent off late on for tripping Tammy Abraham in the box.
Lewis Baker converted the resultant penalty to complete the win.
The victory against the hosts means Aidy Boothroyd’s side top the standings with seven points.
England can now look forward to a semi-final at the Stadion Miejski in Tychy on Tuesday, 27 June [17:00 BST] although they will not know who they will face until the completion of the group stage on Saturday.
Because there are only three groups at the tournament – the three winners each progress along with the best-placed runners up – this is where things get a little complicated.
At the moment Slovakia, who finished second in Group A behind England with six points, are in pole position to progress to join the group winners in the last four.
Czech Republic and Portugal, second in Groups B and C respectively, both have three points with one game left to play.
If a team from Group B or C finishes as the best-placed runner up – which can be one of only Portugal, Germany, Italy and the Czech Republic – then England will play them in the last four.
But if Slovakia take the best runner-up slot then England will play the winner of Group C. At the moment, Germany top the standings in that group with six points, three ahead of the Czech Republic and Denmark.