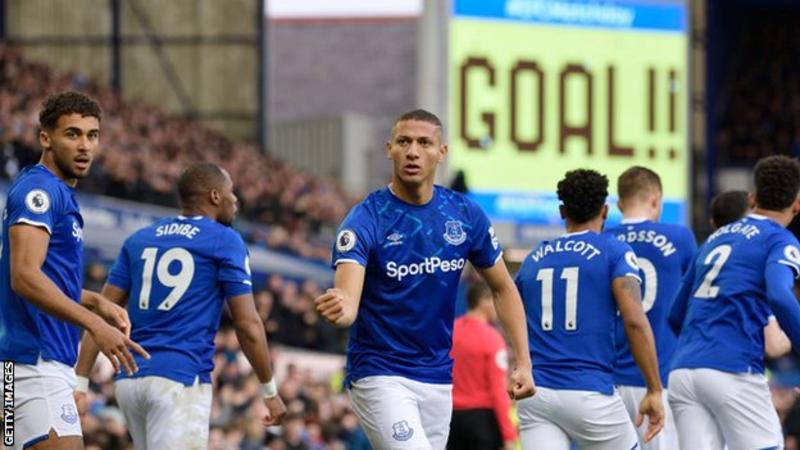 Everton caretaker manager Duncan Ferguson made an instant impact on the pitch and a spectacular one-off it as he started his reign with a vital victory over Chelsea at Goodison Park.

Ferguson is in interim control after Marco Silva was sacked following Wednesday’s Merseyside derby thrashing at Liverpool that had left the Toffees in the relegation zone.

And Everton banished their recent struggles to run out fully deserved winners on a thunderous occasion illuminated by the former striker’s wild celebrations.

The Scot raced down the touchline when Richarlison headed Everton in front from Djibril Sidibe’s cross after only five minutes, then swung a ball boy around in the air when Dominic Calvert-Lewin took advantage of slipshod Chelsea defending to increase their lead four minutes after half-time.

Chelsea frayed some nerves in the home crowd when Mateo Kovacic pulled one back from long range – but Ferguson was off down the touchline again when more awful defending from Frank Lampard’s side allowed Calvert-Lewin to scramble his second through goalkeeper Kepa Arrizabalaga’s legs with six minutes left.

Ferguson and his players took the acclaim at the final whistle as the mood lifted at Goodison Park.

Ferguson has long enjoyed cult status with a large section of Everton’s support – and he has added another chapter, albeit a small one, with this memorable victory.

The 47-year-old was visibly emotional at the prospect of managing Everton, even for one game. He was suited and booted – determined to relish every second.

In some respects, the Scot was the last man standing because he has been on the coaching staff under Roberto Martinez, Ronald Koeman, Sam Allardyce and Marco Silva.

This was his time and he certainly left a lasting impression with his fierce intensity, touchline demands and wild goal celebrations.

Ferguson emerged just before kick-off to a raucous reputation and wasted no time reconnecting with the fans who adored him as a player.

Never mind the smart shoes, he was off down the touchline at a fair lick whenever celebrating.

The most important thing for Everton and Ferguson was the result – and that came deservedly from a set of players who should actually question themselves over how they showed a competitive edge and fire that was missing under Silva.

Everton were resilient in a way they have not been this season, while Calvert-Lewin channelled the spirit of Ferguson by giving Chelsea’s defenders a nightmare afternoon.

It is only one result – but how Everton needed it and Ferguson fully deserved to celebrate his part in it.

READ ALSO: GANDUJE SET TO ANNOUNCE EMIR OF BICHI AS CHAIRMAN OF THE STATE COUNCIL OF EMIRS