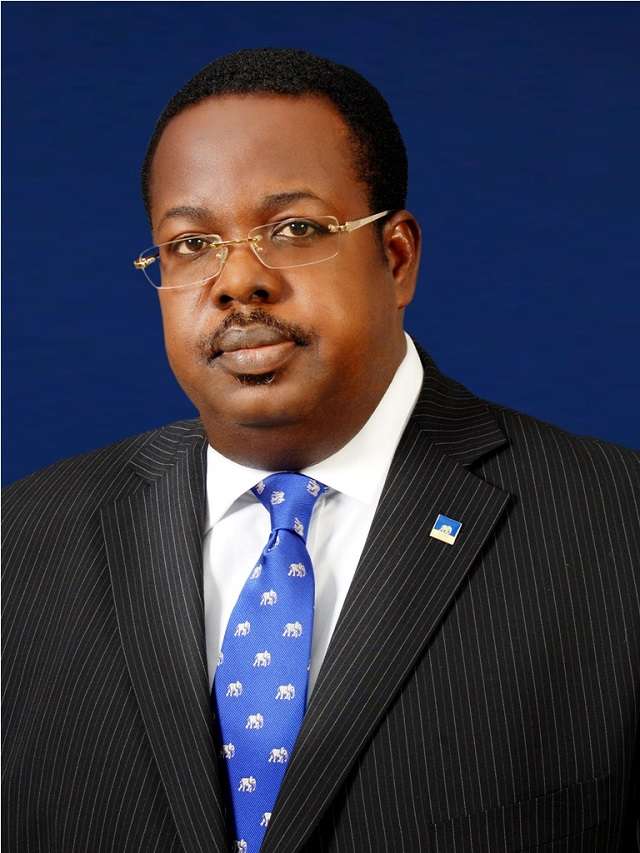 Have you been wondering  what ex-First Bank MD, Bisi Onasanya has been up to since he retired?we can tell you. He has been spending his time nuturing his real estate business amongst many other investments he has. Until a few months back, Bisi Onasanya was MD/CEO of First Bank of Nigeria. And he ran the bank so well.

Since he retired he has gone into real estate business. And he plays big in that sector. He has heavy commercial investments in Ikoyi, Lekki, VI and Ajah areas of the Island. He has some priced properties he has been selling to those who can afford it. But he does not make noise about it.By nature he is a very quiet corporate player. He is not a loud person by nature. That is why the media hardly writes about him. He  recently moved into his Banana Island mansion in Ikoyi.

It is a lovely house which will leave an indelible mark on the mind of any visitor. Behind the gates of the impressive manor, luxury saunters in a colourful garb.

With the aid of a few columns stuck here and there, or rich window dressings and rustications in another place, and aided by the fatal facility of stucco paintings, the designer managed to get over an immense amount of space with a very slight expenditure of  creative thought.

The building is garland outside with arcs and flowers, and bunched of knot-grass. His new house is a testament of class. No doubt. The former Managing Director (MD) of First Bank Nigeria Plc would be unable at acquire such luxury had he not invested rightly. He lives a charmed life. No sooner did he retire from First Bank than he relocated from his Ikoyi residence to his Banana Island mansion. At his new mansion, he has on display, the choicest and most expensive automobiles. And just recently, he added 2017 models of the most expensive auto brands like jaguars, range rovers, Porsche panamera and so on to his fleet of cars.

Apart from his cars, he owns a massive farm in Epe/Lekki axis of Lagos State. He also owns impressive stakes in the coastal city’s real sector. This includes posh apartments in the most exclusive and highbrow areas of Lekki. Hence even though he is retired, Bisi is making a hell of money from his farm and posh apartments.

His growing up years started when he was born as Olabisi “Bisi” Stephen Onasanya , (August 18, 1961)  in Ibadan, the Oyo State capital,  but he lived all his life and schooled in Lagos. He hails from the Onasanya Family in Ijebu Land, Ogun State . He grew up in Lagos, Nigeria’s commercial capital, where he attended St Paul’s Anglican Primary School (Mushin), Eko Boys High School (Mushin), He holds an HND Upper Credit in Accountancy from Lagos State College of Science & Technology. Bisi is the eldest of four children from his mother, and the third of his father’s children.

Behind this successful man is a beautiful woman whom they have been together for 29 years. Helen Omowunmi Onasanya is the robust wife of First Bank MD, Bisi Onasanya. Born in 1962, a native of Osun State, she runs Steve and Helen, a which is the combination of their names. It is company where she stocks and import high grade of different cosmetics and other goods which she sells in wholesales. An entrepreneur right from when she left the University, she started her business in 1988.She learnt how to trade from her grandmother and she hails from Osun State. She attended Sijuade Nursery School, and then Mayflower Secondary School, Ikenne and Lagos State Polytechnic, where she studied Insurance. They met while in the secondary school, at a point they went to the same secondary school and the same polytechnic. Helen studied Insurance while Bisi studied Accounting.The beautiful couple got married October 25, 1986 and they have beautiful and successsful children to show for it.Their first daughter is a computer scientist and workswith an international consulting firm. One of their sons is an accountant but much more interested in real estate. Their second son is studying economics at the university and the last born is also a boy.

His wife, Helen is She has a company she runs,Helen and Steven.She deals in the importation of cosmetics.She is also a director with Daniel Ford Maintenance Ltd in London.

Reputed as a seasoned banker and chartered accountant, Onasanya is a highly respected and personable executive who has established a reputation at FirstBank for solid performance and sound judgment. He is widely reputed as the architect of the modern FirstBank. He succeeded Sanusi Lamido Sanusi as Group Managing Director/Chief Executive Officer upon the appointment of the latter, now the Emir of Kano, as the Governor of Central Bank of Nigeria in 2009.

A chartered accountant, his father was an accountant which helped in shaping his love for accounting.  Bisi is credited with pioneering initiatives in Nigeria’s nascent pension custody industry that helped define best industry practices.

He qualified as a chartered accountant in 1982 at the age of 22, which was 5 years after leaving secondary school. He has over 25 years post qualification experience and until his appointment as GMD/CEO was Executive Director, Banking Operations & Services. Prior to joining the Board of First Bank he was the Managing Director/Chief Executive Officer of First Pension Custodian Nigeria Limited, a wholly-owned subsidiary of First Bank of Nigeria Plc. Bisi started his banking career as Senior Accountant with Wema Bank in 1985. He joined FirstBank in 1994 as a Senior Manager and held several positions. He was Deputy General Manager and Group Head, Finance and Performance Management Department, as well as Coordinator, Century 2 Enterprise Transformation Project, before his appointment as MD/CEO of First Pension Custodian in 2005. He is a Fellow of the Institute of Chartered Accountants of Nigeria and an Associate Member of the Nigeria Institute of Taxation. He is also a Director of FBN Bank (UK) Limited and FBN Insurance Brokers Limited.

His retirement took effect at the end of the last Financial Year on December 31 2015 and according to a statement from First Bank, ‘Onasanya is retiring on the heels of an inspiring and enviable career spanning over three decades of diverse management and operational experience, 21 years of which he has spent with First Bank, serving meritoriously in the last six years as Group Managing Director/CEO. He has been able to stabilise and modernise the expanding First Bank brand since his appointment in 2009, thus reinforcing the confidence of the bank’s diverse stakeholders and the global financial publics.’

Be that as it may, Onasanya is to be succeeded by Adesola Adedunta, a prominent face.

However, while his retirement has been made public what people are yet to know is his plan after retirement. But according to findings, we can authoritatively tell you that Onasanya has his eyes on real estate business. He’s said to have told his friends that he has a big love for real estate and wouldn’t mind venturing into it after leaving office.

Do You Want To Live @ ELEGANZA Gardens?

Our Goal Is To Turn Landowners To...

How I Coped During The 2 Months...