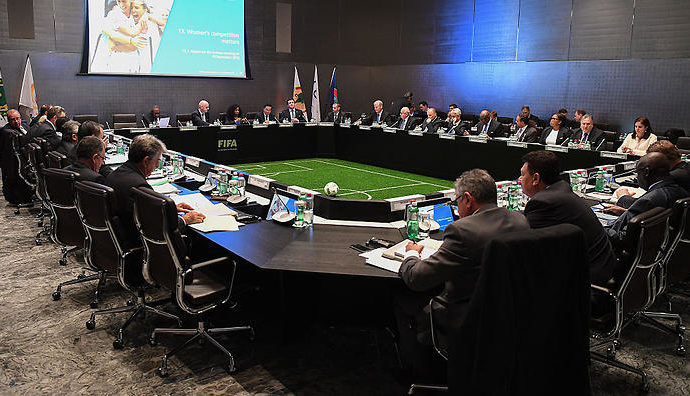 General view prior to part II of the FIFA Council Meeting 2016 at the FIFA headquarters on October 14, 2016, in Zurich Switzerland.Valeriano Di Domenico – FIFA/FIFA via Getty Images

FIFA is set to make the World Cup bigger and richer, even if the price to pay is lower quality football.

A decision could be delayed if some Council members demand to know exactly how many qualifying places each continent will get before agreeing to scrap the 32-team format. It has been successful, popular and profitable since 1998 and is locked in for the next two World Cups in Russia and Qatar.

The prize of 16 extra places, and the biggest increases to Africa and Asia, has “overwhelming” support from FIFA’s 211 member federations, Infantino has said.

Their promise of extra funding from Zurich could also be secured by FIFA’s forecast 20 percent rise in rights fees paid by broadcasters and sponsors.

“Financially, the 48-team format is the most appealing or successful simply because the sporting element is prevailing and every match is important,” Infantino said two weeks ago. “The decision should not be financially driven, neither in terms of revenue or costs … but the driver should really be the development of football and boosting football all over the world.”

World Cup champion Germany is not in favour. It argued that diluting the number of European and South American teams – which won all 20 titles since 1930 – could “strengthen the imbalance” seen at some tournaments.

“The (German soccer federation) fundamentally believe that the current 32-team format is the best option,” its president Reinhard Grindel said last week. Germany has no delegate at Tuesday’s meeting though Grindel is set to join the FIFA Council in May.

FIFA acknowledged the risk of lower standards in a research document sent to members last month, as first reported by The Associated Press.

The “absolute quality” of soccer, defined by high-ranked teams playing each other most often, is achieved by 32 teams, FIFA said, citing 10,000 tournament simulations made to reach that conclusion.

FIFA expects $5.5 billion income tied to the 2018 World Cup in Russia, though 25 of 34 sponsorship slots are unsold. The research document predicted the equivalent of $6.5 billion revenue from a 48-team tournament in the “16×3” format, which would send two teams from each group to a new Round of 32 knockout bracket.

All 80 matches would play in an exclusive time slot. Currently, 64 World Cup matches have 56 broadcast slots because the eight four-team groups play their last matches simultaneously.

Though a “16×3” World Cup would still need a maximum of 12 stadiums, the demand for 16 more top-quality training camps and hotels suggests FIFA would look for 2026 hosts with existing capacity.

A North American bid from two or three of the United States, Canada and Mexico is currently favoured in a contest that could start within weeks.

Five options are open Tuesday, including staying with 32 teams.

Infantino campaigned last year on a 40-team promise, in either eight groups of five teams or 10 groups of four teams. Neither impressed voters in recent regional meetings of FIFA member federations.

When the FIFA leader first proposed 48 teams, it included an opening playoff round. The 16 winners would join 16 seeded teams in a traditional 32-team group stage.

FIFA members disliked “one-and-done” teams going home before the “real” World Cup kicks off. It would also stretch to a 39-day event with more short-notice travel for fans.

Africa and Asia could be the big winners, and FIFA hopes new teams would include another Iceland, Wales and Costa Rica – over-achieving teams and feel good stories at recent tournaments.

“The goal of expanding the FIFA World Cup,” it has told members, “is to further advance the vision to promote the game of football, protect its integrity and bring the game to all.”

See Cute Photo of Femi Fani-Kayode and siblings in 1972 ]