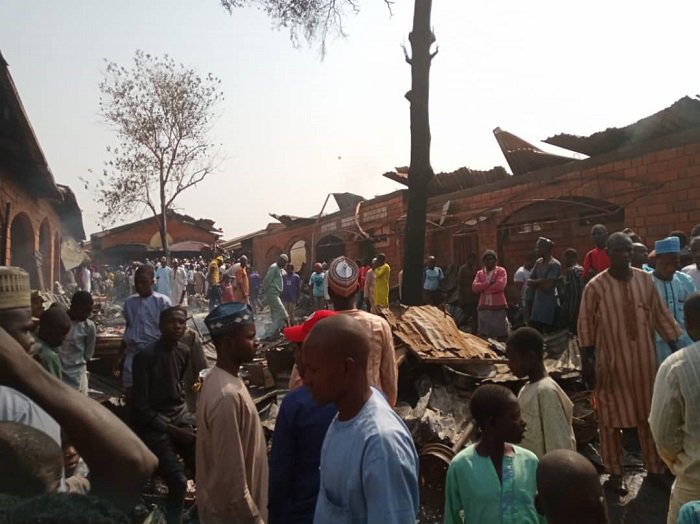 A fire outbreak at the Kure ultra-modern market in Minna has left traders of clothes as well as palm and groundnut oil with losses amounting to several millions.

The fire, which began at about 6 am, gutted over 70 shops before it was successfully put off at about 12 pm.

Goods lost were estimated to be about N700 million with traders of palm oil mostly affected.

It was gathered that the fire started from a tea and noodles seller whose extension shop was very close to the palm oil block.

The seller was said to have left his stove on and went for the early morning prayers leaving the fire unattended to.

It took some hours before men of the state fire service could put off the raging fire from consuming more shops and blocks.

Some hours into curtailing the fire, another part of the market was ignited at about 11 am which started from a locked shop.

It took almost two more hours before the fire could be put off.

Security agents from the Police, Nigeria Security and Civil Defence Corps, Federal Road Safety Corps and local vigilante were on ground to prevent miscreants from stealing as the traders scampered to mitigate their losses.

Niger State Governor, Abubakar Bello, visited the market to commiserate with the affected traders, bemoaning the annual occurrence of fire outbreak in the market.

He said efforts would be put in place to avert future occurrences while investigation would be launched to find out the cause of the fire and work out strategies to prevent future fire outbreak.

The governorship candidate of the Peoples Democratic Party (PDP), Alhaji Umar Nasko, also visited the market to console with the affected traders.

He promised to find a lasting solution to the yearly incident, if elected into office.

READ ALSO: BUHARI, OSINBAJO TO SPEND OVER N1.4 BILLION ON FOOD, TRAVELS IN 2019