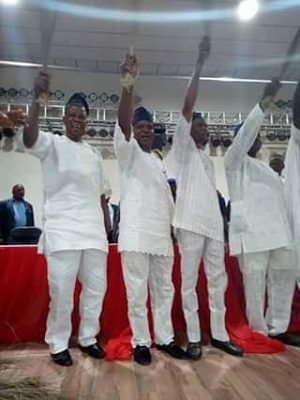 Five PDP lawmakers in the Ondo State House of Assembly have dumped their party for APC. The defectors include Honourable Tuyi Akintimeyin ( a.k.a.Sosoliso) – Idanre, Fatai Olotu. – Akoko North East‎, Bimbo Fajolu – Ile-Oluji / Oke Igbo, Fasogbon Akinyele -Odigbo and Towase Kuti – Akoko South East.
Receiving the defectors at an event in Akure, the state capital, the Governor of the state, Rotimi Akeredolu stated that the lawmakers were not financially induced.
“We talked to them to cooperate with us in the interest of our state and they agreed. We must thank them for their courage and patriotism. Where they’re coming from is like a forest of one thousand demons” he said