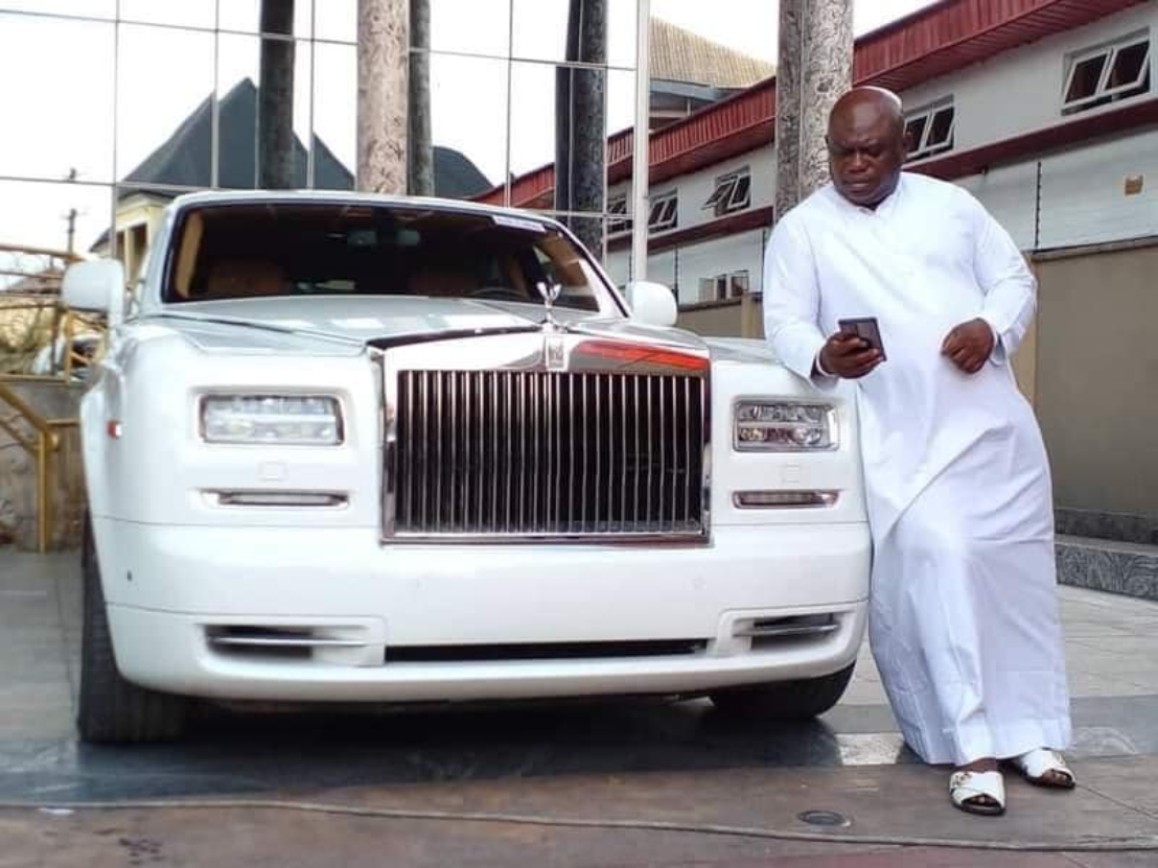 The maverick “Doctor Jesus” proponent and founder of Omega Power Ministries—OPM, Apostle Gift Chinyere Chibuzor has acquired a new wonder on wheels Rolls-Royce Ghost sedan car which cost him about $314, 400. The General Overseer some years back had rejected a gift of a similar car donated to him as a birthday Gift by his church instead he requested that the car be returned and the proceeds be channelled towards charity works of his Omega Power Ministries -OPM. Apostle Gift Chinyere Chibuzor loves driving fast-moving cars and having a good feel of them by being at the driver’s seat instead of being chauffeur-driven as G. O. His clear level-headedness and a deep sense of humility has attracted a lot of followers of his OPM outreach worldwide. His modus operandi in healing and deliverance has made his OPM Pray Ground located at ALUU Mgbodo community the outskirt of Port Harcourt a mecca for people of Faith whether Christians, Muslims or traditional people as much as they renounce their background and submit to Doctor Jesus their problems will be resolved through prayers.

For the newly acquired Rolls Royce Ghost model of pleasure car, the G.O is seen posing with it in almost all of his platforms’ profile images and whenever he is driving all motorcades in his convoy usually trail behind him on wheels.

Before now he had in his fleet of cars G-Wagon SUV which he also finds himself on the wheels most of the time. Apostle Gift Chinyere Chibuzor has established OPM Free Specialists Hospital in Port Harcourt where indigent women attend for free medical services. Recently he sent to the Republic of Turkey a group of indigent students for university education which has attracted more youths who now worship at OPM worldwide. Again, he went to brothels in Port Harcourt in an evangelism crusade where prostitutes accepted Jesus Christ as their personal saviour and he invited them to his private residence where he feed them and resettled them in OPM Free Estate in Port Harcourt and provided them with skills acquisition and he had given out the hands of some of the prostitutes to men in marriage a dream they could not believe is true but now real as they are married to highly respected members of the society. Even cultists have surrendered their guns to Apostles Gift Chinyere Chibuzor which he delivered to Rivers State Commissioner of Police as he rehabilitates them with Free OPM Estate and OPM FREE Skills acquisition as a majority of the former cultists are working in Oil & Gas industries while some are overseas working and doing genuine businesses. For those interested in going into OPM Free Cassava Farm, he provided them with Farm support funds and equipment. OPM FREE Schools which Apostle Chibuzor established for brilliant indigent pupils are now admitted and given first-class teaching/learning experience all for free.

All OPM Free Restaurants, OPM Free Boutiques and Free Humanitarian Projects are being handled by carefully selected members of the OPM of high integrity under the aegis of Divine Distributors with High Chief Matt Offeh as Chairman and OPM members’ Tithes and Offering are used to fund such projects in a well transparent coordinated way managed by Divine Distributors of OPM.

READ ALSO: HOW I HAVE RUN FRONTLINERS GRP OF SCHOOLS FOR 19 YRS – PROPRIETRESS, MRS. ESTHER ALIU

How I Have Run FRONTLINERS Grp Of Schools For 19 Yrs – Proprietress, Mrs. ESTHER ALIU