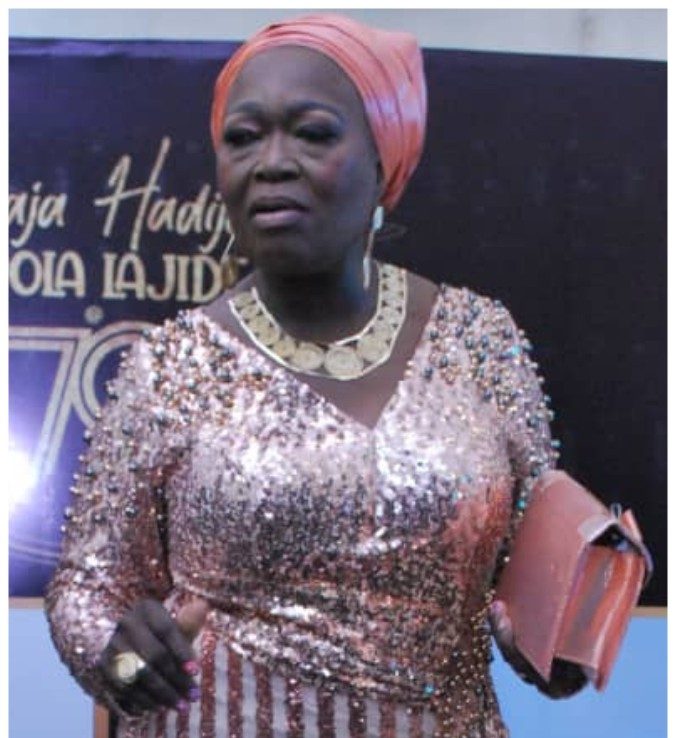 It was indeed a memorable event on Saturday, 20th August, 2022, as Alhaja Hadijat Bola Lajide celebrated her 70th birthday. The glamorous birthday ceremony will definitely linger for a long time on the minds of family, friends and close associates who witnessed the very special occasion. In fact, it was a 2-in-1 party. The platinum jubilee and retirement celebration of Alhaja Lajide, having served meritoriously in the nursing profession for 35 years. From the Emeritus Professor Theophilus Oladapo Ogunlesi Hall venue of the party, that was transformed into a small paradise with exquisite decorations to security, sumptuous meals both local and continental, choice drinks, the lovely ushers, music, the beautiful six-step cake and top notch celebrities that graced the occasion. Everything about the party had touches of class and glamour. The celebrant, who rode into the venue in a Black stretch Limousine, looked radiant, elegant and beautiful in her perfectly sewed gown, which she later changed to another perfectly fitted iro and buba. So much that it would be difficult to believe that she is 70 already. Alhaja Bola Lajide’s ever supportive husband was at his best too. The children, in collaboration with the event planner that packaged the whole event, made sure the invited guests had a swell time all through. It was souvenirs galore at the party as well, especially the souvenirs for those who participated in the Aso-Ebi. Colour code for the party was Orange. There was cap for men too. About 100 hundred society women participated in the Aso-Ebi. It was so colourful. Apart from the decorations, what also added colour to the venue was the walkway and other strategic parts adorned with the celebrant’s photographs.

Alhaja Bola Lajide is a retired registered Operating Room (OR) Nurse after over 45 years in the field. After receiving her first degree in nursing from University College Hospital, UCH, Ibadan, she worked in the OR at Igbobi Orthopedic Hospital in Lagos and then continued in the OR abroad in the USA.

Alhaja Bola Lajide is married to Alhaji Munir Lajide, also a retiree with a PhD in Food Science. Highlights of his career in Nigeria includes leadership positions at Samco and Sona Dairies from the 70s to the late 80s, before migrating outside Nigeria. Together, they have 4 children (Lara, Tosin, Ayomi and Dipo), 2 sons and 2 daughters, who are all professionals in their respective fields. They are also blessed with 8 grandchildren. In her spare time, Alhaja Bola Lajide loves to serve people in need within the community that she lived in, both within and outside Nigeria. Some of her hobbies include dancing and traveling to experience new places, food, and meeting people.

Some of the high points of the party includes the Chairman’s remarks, goodwill messages from within and outside the country, celebrant’s dance with friends, and cutting of cake as coordinated by the President of the Central Council of Ibadan Indigenes, CCII, Prince Yemisi Adeaga, who also represented the Olubadan of Ibadanland, Oba (Senator) Olalekan Balogun.

In her speech, Mama’s first born, Lara Akinsanya (Nee Lajide), described her mum a loving, caring and accommodating, not only to her biological children but everybody that has come her way. Lara’s stance about her mum was also corroborated by the Chairman of the occasion, the Alara of Ara Kingdom in Egbedore Local Government Area of Osun State, Oba (Dr) Olubayo Adesola Windapo, who described Alhaja Bola Lajide as generous, kind and a loving woman whose legacies will live after her. Same also goes for Dr. Tunde Oyedeji who said the opening prayer at the party and was Mama’s husband’s Best Man at their wedding years back. So also were Princess Oyefunso Orenuga (Nee Oyewunmi) who met her (the celebrant) in 1976 and was her bride’smaid in 1977, Olukunle Ajibade and several others who couldn’t make it to the party, especially those in the US. They all testified to Alhaja Bola Lajide’s kind gesture towards humanity. So the celebration was a kind of pay back time for many souls Alhaja Lajide has impacted positively.

Another high point of the party was when Oyo APC guber candidate for 2023, Senator Teslim Folarin came into the hall. The atmosphere was charged by his entrance, especially when he later joined the celebrant on the dance floor. As usual, Folarin made a great statement with his entourage, in which included the likes of Hon. Shina Alabi, Barister Lowo Obisesan, Hon. Tunji Ajimobi, Alhaji Yinka Folarin, Alhaji Wale Adedibu and Hon. Abiodun Adisa.

Those who also contributed to the success of the party in one way or the other were Alhaja Adenike Taiwo (she was an excellent hostess at the party), who flew in from America purposely for the party, Alhaji Laide Oladeji, who came with his beautiful wife, Alhaja Bolatito Oladeji, and several others who were highly supportive and made sure all went as planned.

The well attended, clasically packed party was anchored by Funmi Latunji-Ojo of Kezington Events. She really put in her best and made sure the party got some elegant touches as her company’s motto connotes. Mrs. Dupe Ogidiolu, CEO of Master Chef Catering and the celebrant’s childhood friend, supplied the sumptuous meals and the yummy small chops. Solizzy handled drinks, popular Ibadan-based comedian, Taiwo Obama was MC at the party. While Sarmmie Infinity Decorations designed the venue. Popular gospel musician, Evangelist Kunle Ajomale was on bandstand, while DJ Wilson was on the wheel of steel.

Apart from the delicious food and choice drinks served at the party, other things that really spiced up the whole event was the African touch as palm wine was also served by Atoke. What about the popcorn, mocktail, fish barbecue and all? Everything was made available in abundance. M-One Security Services was in charge of security. They made sure the venue was devoid of touts and miscreants.

READ ALSO: WHY MANY TOP POLITICIANS ARE MEETING WITH OBJ

Why Many Top Politicians Are Meeting With OBJ

How Olofin OF ISHERI Reached Out To...