Gists From The Burial Party Of Alhaji ODUNBAKU In LAGOS 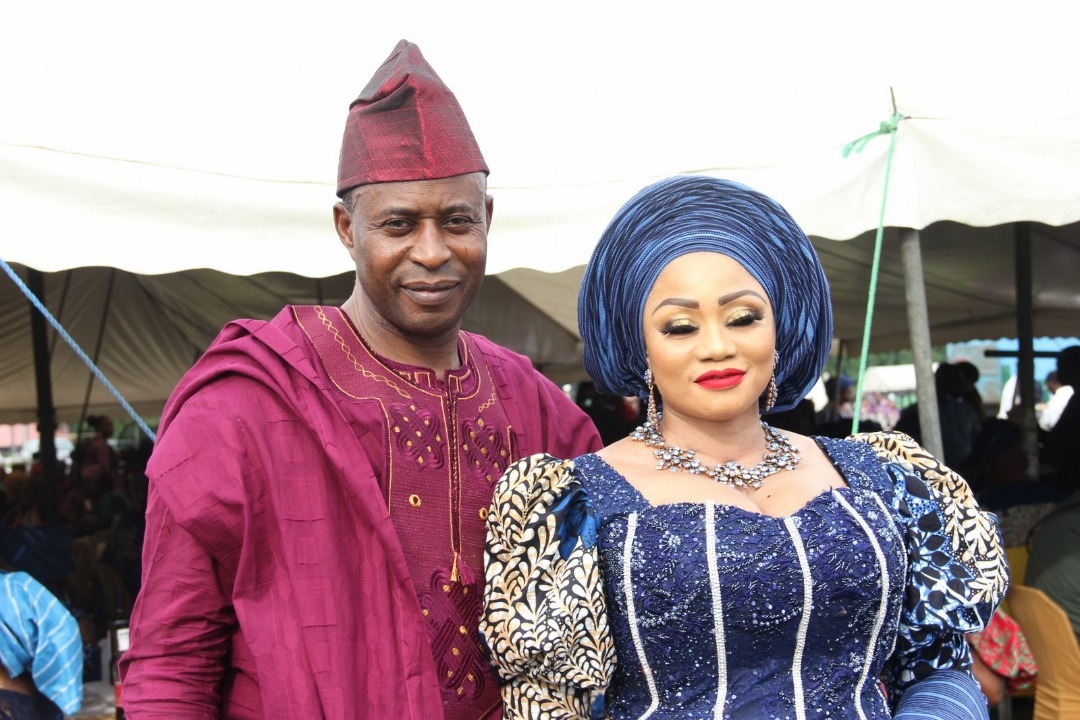 The Police College grounds in Lagos is known for hosting many social gatherings. On Saturday, June 25, 2021, the children of late business mogul, Alhaji Abdulwaheed Adisa Odunbaku threw a classy burial party for their father.

2 top fuji musicians, men of timber and calibre from all walks of life, movie icons and fast-rising stars gathered at the party to celebrate the man who had made a huge impact in life. That was the short story of the late Odunbaku as told by some of his children and the crowd that gathered at the event.

City People’s DAMILARE SALAMI 08155134152 was there with Photographer ADBULRASHEED SANNI who covered the event. Below is the blow-by-blow account of all that went down at the party.

WHO WAS ALHAJI ABDULWAHEED ODUNBAKO?

Many people had a lot to say about the life and times of Alhaji Odunbaku. One of the children of the deceased who spoke with City People revealed that the late icon was a man of many phases. Firstly, Alhaji Odunbaku was a proud Egba son who hailed from Abeokuta in Ogun State. He was a successful realtor who made his mark as a developer in Lagos. During his days, Alhaji Odunbaku was very popular in the Ilasamaja axis of Lagos and was frequent on the social scenes too.

This illustrious Egba son was a father to many children, a grandfather and great grandfather. He had 13 children namely; Taofeek Odunbaku, Akeem Odunbaku, Ganiu Odunbaku, Taoreed Odunbaku, Sherifat, Nurudeen, Bilikis, Latifat, Yusuf, AbdulRahman, AbdulRasaq, Abdulmojeed and Nimotalah. His children are all successful too and it was obvious in the burial party they threw for their dad.

He was a devout Muslim who died at the ripe age of 92 but before his death, he had bagged several chieftaincy titles as a mark of the recognition of his contributions to humanity and his immediate environment. The late Pa Odunbaku was the Aare Ona Kankanfo of Ibarapa Kingdom, the Mayegun Muslim of Ijayeland, Asiwaju of Awori Land and the Ekerin of Ilasamaja in Lagos.

For most owambe parties, the customary thing is to have one musician who serenades all the guests but the story changed at Pa Odunbaku’s burial party. There were two popular musicians who did their thing at different spots. The first was Sir Shina Akanni Aroworeyin and his band boys. He took the first end and entertained the guest from there. The second was Ganiu Ayinde XI. The fuji musician who became very popular by singing like K1. The argument was that K1 was at the second bandstand because of the kind of tunes oozing from that end, however, it wasn’t K1 but his sing-alike, Ganiu Ayinde XI.

No one needs to be told at this end of the world that Ankara Aso-Ebi is always the plug for any owambe. This time around, there were about three different Aso-Ebi fabrics for the same party. The first was a combination of green and orange, the second was another shade of royal blue and orange while the third was a combination of royal blue and yellow. The fashion styles at the event spoke volumes about the class of the guests. The event could as well pass for another fashion show considering how many ladies of style slayed in their outfits; all for the late Pa Odunmbaku.

When a burial party is beginning to look like a comedy show where guests are laughing out loudly and having fun as a result of the rib-cracking jokes coming from the compere, then one should consider such a compere a pro. That was the flavour Lanko Omooba Dubai added to the already enthralling party. Lanko was a fun plug at the party. From dance, to stand up comedy, name-calling and rib-cracking jokes, he brought all to the table. He made the event so enjoyable the guests demanded that he returned to the stage for more.

SOME NOLLYWOOD STARS TOO WERE SPOTTED

Trust Lanko not to keep any secrets when he is anchoring an event. Some Nollywood stars were trying to hide among the crowd but he fished them out one after the other. He was practically calling their names and bringing them to the stage and those who refused to come out were equally announced. Some of them are TAMPAN President, Mr Latin, Odunlade Adekola, Ayoka and many more.

ALHAJI GANIU AND HIS PRETTY WIFE, YEMI ODUNBAKU STOOD OUT

Alhaji Ganiu Odunbaku is the 3rd son of the late Pa Odunbaku. He is happily married to a beautiful woman, Mrs Yemi Odunbaku. He is also a popular socialite and his wife is a nurse in the United State of America. This couple was the most stylish at the event. They stunned in two different attires. Their first outfit was a beautiful wine material adorned by the children of the deceased. The second was the royal blue and gold-like yellow adorned by the friends of Ganiu and Yemi Odunbaku.

This corner was arguably the most trendy, most fascinating and most lively at the event. It had men and women of style from Nigeria and overseas. They all stunned in the royal blue and gold-like yellow Ankara Aso-Ebi, the special aso-ebi meant for Alhaji Ganiu and Mrs Yemi Odunbaku’s friends. A further enquiry revealed that their Aso-Ebi was the most expensive at the event. Trust Mrs Yemi Odunbaku who came all the way from America to celebrate her late father-in-law, she wouldn’t go for anything less classy.

At this corner, there was more than enough cash spray. Even before Lanko called Alhaji Ganiu and his wife up stage for their dance, the friends of this charming couple couldn’t hold it, they had started spraying at intervals at their corner. And when the couple mounted the stage to dance, the sight is better seen than told. They practically held the stage for as long as anyone could remember. It wasn’t a show-off; it was simply because of the crowd they pulled and the class of people in the circle. Some of the faces spotted at this corner included HRH Oba Olalekan Fasasin, The Alade Okin 1 of Ile Ife area, Rev Bunmi Jenyo, Yeye Adejoke Ojo, Dr (Mrs) Kikelomo Adedotun, Mrs Oluwakemi Oyalami, Kabiesi Olanrewaju Tajudeen Bakare Ajamajebi, Amb. Ade Arogundade from Manchester, UK, popular socialite, Wale Saubana and many others.

She certainly doesn’t cut the picture of the conventional civil servant. Yeye Adejoke Ojo, the Yeye Arobake of Iba land in Osun State, is a gorgeous looking woman who looks more like a successful businesswoman rather than a typical Civil Servant. This is largely because she is a fantastic dresser, a respected society woman and an undeniably pretty lady. But before and above all these, she is first and foremost an accomplished civil servant who has dedicated a large chunk of her life to serving Lagos State. And she has done remarkably well for herself. Having started as a classroom teacher several years ago, this charming and hardworking woman has seen her career grow in leaps and bounds, and today, she is an Assistant Director, Head of Procurement Unit, LASEPA. She made one of the highlights of the event with her remarkable dances. She was also spotted spraying Sir Shina Akanni, her Odunbaku friends and others.

To many that are conversant with Lagos society, the name of Wale Saubana would surely ring a bell. He is one of the top socialites in Lagos, London and the US. It is on record that no major shindig by Nigerians was complete without his presence.  He is the toast of music stars, especially Fuji music stars, K1 the Ultimate had on several occasions sung his praise. This, according to those close to him, is as a result of his generosity.  And as a car freak, his garage is filled with the latest state-of-the-art cars. He practically stole the show at Pa Odunbaku’s burial. His time out at the event only shut many of his critics who have been sponsoring rumours that he was broke. Wale Saubana has just proven again that he is still very relevant on the social scene.

Mrs Morayo Ijaola is a friend to Mrs Yemi Odunbaku and her husband. She was everywhere covering all loopholes and making sure that the guests were well catered to. To call her an event planner would just be apt. She ensured that all the guests and friends of Alhaji Ganiu and Mrs Yemi Odunbaku were satisfied.

Gists From The Burial Party Of Alhaji ODUNBAKU In LAGOS was last modified: July 6th, 2021 by Damilare Salami