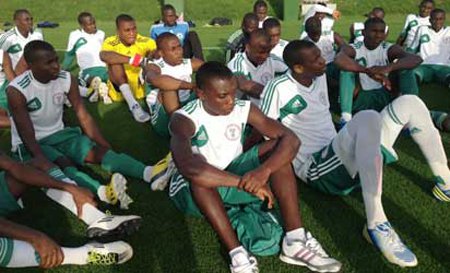 The Head Coach of the Golden Eaglets, Manu Garba, on Tuesday said the team was 80 per cent ready for the Under-17 AFCON Tournament for CAF Zone 3 in Niger Republic.

Garba said that the national under-17 male football team was ready to qualify for the CAF Under-17 Tournament scheduled for Tanzania next year.

He said he was confident that his players have the capability to overcome their opponents in Niger Republic.

“We are good to go. My boys are in form in all ramifications. They are promising and young, and they can stun any opponent within their age bracket,” Garba said.

He added that many of his players were skillful exceptionally, and their aim was to be in Peru in 2019 for the FIFA U-17 Men’s World Cup.

“The coaching crew will continue to work in the best interest of the country.’’

Garba disclosed that many of his players were taken from the national under-15 team after thorough screening.

He urged Nigerians to continue to support the team because the players were ready to make the country proud.

The team, as part of their preparations, recently beat Udala FC of Awka 2-1 in one of their warm-up matches.

Qualifying competition for the Under-17 AFCON tournament has seen the teams divided into six groups.

Niger Republic will be hosting the qualifiers which commence in September.