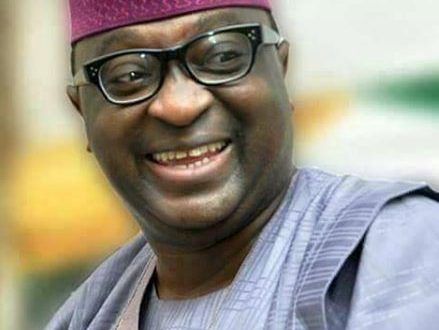 It is no longer news that Gov. Ibikunle Amosun’s Chief of Staff, Chief Tolu Odebiyi is running for Ogun governorship, come 2019. We can confirm that to you authoritatively.

When the news first broke a few months back, many thought it was a joke because he is not a professional politician. But insiders were soon to reveal that Gov. Amosun’s decision to make him Chief of Staff was to prepare him for the task and make him learn the Ropes in Politics and Governance. Amosun’s strategy is similar to that of APC National Leader, Asiwaju Bola Tinubu, in Lagos which is to get a Technocrat to be Governor whilst he would handle the political aspect of governance. That was why he chose former Governor, Babatunde Raji Fashola at the time he did and also chose the current governor of Lagos, Mr. Akinwunmi Ambode. Both are technocrats.

That is what Gov. Amosun plans to do, reveals an insider.

That is also why Amosun has revealed that he will support any Yewa Candidate that the Yewa people put down, as long as it is not Senator Yayi, the current Senator in Lagos.  This is because he does not see eye to eye with Yayi.

It is open knowledge in the state that Odebiyi has the blessing of Gov. Amosun. Not only that, he has begun wide consultations with stakeholders.

He now frequents home to hold meetings and sensitize his people, politically.

What does Gov. Amosun see in him you may wonder? We can tell you.

If the next Ogun governorship election was to be decided on the popular “omo wa ni, eje o se (He is our son, let him become the governor), Chief Tolu Odebiyi will have an edge over all the other aspirants to the top job in Ogun State revealed a source.

Political pundits say there are so many factors that may work in his favour. He comes from Iboro, a town in Yewaland, which has never had the opportunity to produce an Ogun Governor. Recently, former President, Chief Olusegun Obasanjo advocated that the next governor of the state should come from Ogun West where Odebiyi hails from. Odebiyi’s mother, late Chief Kemi Odebiyi was Obasanjo’s classmate in primary school. Tolu Odebiyi’s late father, a former senator of Nigeria was an associate of Chief Obafemi Awolowo and close friend of Awujale of Ijebuland, Oba Sikiru Awujale.

Odebiyi, is the son of late Senator Jonathan  Odebiyi,a Nigerian educator, businessman and politician who was a Member of the Western House of Assembly during the independence era and later became Regional Minister of Education,(1956-1957) and Finance,(1957-1962). During the Second Republic, he was a Senator from Ogun State. He acquired numerous chieftancy titles including the Odofin of Ilaro.

Tolu Odebiyi’s father was also one of the early outstanding students from Iboro and one of the earliest Yewa citizens to acquire a University degree. He was educated at Saint Andrew’s School, Ipaja, (1928-1936), CMS Grammar School, Lagos,1937-1941, he then went to Fourah Bay College and later earned a graduate certificate in Education from the University of Ibadan. Senator Jonathan Odebiyi is notable for being the first principal of Egbado College, an initiative of the Egbado Union.

He was the college principal from 1951-1956. He later started his own school, Eyinni High School in lbadan in 1966, Chief Jonathan Odebiyi in the Second Republic was a strong leader of the Unity Party of Nigeria (UPN) and a steadfast Awoist,he died at the high brow St. Nicholas Hospital, Lagos on March 21st 2002 at the ripe age of 79.

Tolu Odebiyi’s late mother was Chief (Mrs.) Kemi Odebiyi,a former member of the Independent National Electoral Commission (INEC). She was the Lagos State INEC Commissioner between 1999 and 2007, before her elevation as an INEC National Commissioner by President Olusegun Obasanjo, who was her primary school classmate at African Church School, Ita Iyalode, Abeokuta.

Tolu is also is a popular son of Iboro, in Yewa North Local Government Area of Ogun State, He holds a B.Sc in Building Construction and Engineering Technology from Wentworth Institute of Technology, Boston, Massachusetts, United States of America. He is the Managing Director of Agbara Estates Limited, a development and investment company with over N20 billion in assets.