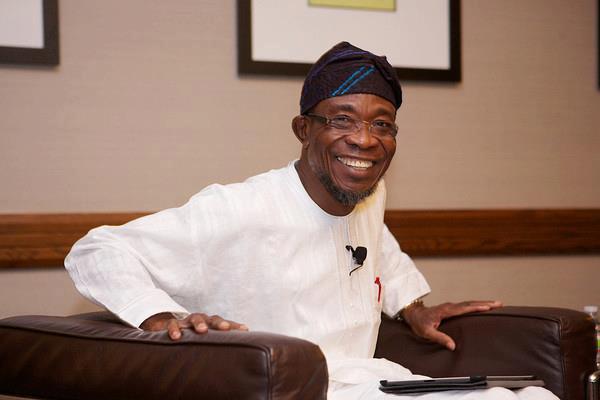 These are good times for the Governor of Osun, Engr. Rauf Adesoji Aregbesola. He clocked 60 last month and his eldest son, Kabir, also got married.

But trust the Osun governor known for his modest and frugal lifestyle, the celebration of both events were low key. “These are times for sobre reflections. “was what he reportedly told all his friends and aides who clamoured for an elaborate party.

On Saturday 27th May, 2017 his first son, Kabir got married in Lagos. The event  witnessed a huge turnout of politicians and businessmen from all walks of life it took place at the Classique Events Centre, Oregun.

The event was the First Phase of the holy solemnization, as the family has picked another date for the grand Nikkai which is stated to take place before the year runs out. The historical moment was beautifully documented in pictures by  Lagos  Photographer, Jide Odukoya, of Jopsstudio, in Lekki PHASE 1.

Ogbeni Rauf Aregbesola who was full of smiles, while the event lasted, was excited seeing how much his handsome son, Kabir has made him proud. He is said to love his son and this is one of the reasons he calls his wife, Alhaja Sherifat Aregbesola, the pet name “Iya Kabir“. Their joy could not be curtailed as they danced into the well decorated Hall on Saturday. The Grooms parent were the first to call in looking glamorous in white and off white special aso-oke design while the Groom’s mum, Alhaja Sherifat,  settled for a white and touch of ash special double organza lace. As usual, her make-up was mild but many of the guests couldn’t take their eyes off the beautiful wife of Ogbeni Aregbesola. This is because she is  simple and modest. She always dresses to conform with the “Sunnah Anobi“.

What of the bride’s parents? The Halli Family were not left out. They are also highly connected and highly influential. They are successful business tycoons who are doing well for themselves. Mr Halli and Mrs Halli dazzled in a special turquoise and white attire for their daughter’s wedding. They also didn‘t leave any stone unturned to make sure their daughter one of the biggest wedding in town.

The engagement anchor didn’t waste much time to make sure that the two families got acquitted to each other as engagement letter was exchanged between the 2 families to accept that the bride and groom should go ahead with their marriage. At few minutes past 3pm, the  Groom, Kabir danced in with his friends to formally seek the hands of Farida in marriage.

Kabir is not only handsome, he is brilliant too. He is an IT Expert. He is a Consultant with SAP Portals in the United Kingdom. He graduated from Sheffied Halam in United Kingdom and he is an Analyst and Portal Consultant. He is also multiligual as he speaks Spanish and French. To say that the Bride family are happy to give their daughter to him in marriage will be an understatement. He is well brought up and highly cultured.

He sat quietly to await the arrival of his beautiful bride Farida. At few minutes to 4pm, the beautiful bride, Farida danced in like an angel in red hand cut attire which she matched with a champagne gold aso-oke. Farida is an angel no doubt as she danced in with her friends who stood out in a baby pink lace. The red attire was just for the engagement, she dazzled later in a special white lace which she bought from Strictly bride, while it was beautifully transformed by top Lagos fashion designer, Lanre Dasilva Ajayi. Her beautiful make-up was done by Beautybyqueen.

The engagement was witnessed by the Governor of Oyo state, Senator Abiola Ajimobi and his pretty wife Florence.

Just as the wedding caught many unawares, Gov. Aregbesola’s birthday caught many unawares. This is because he is not someone known for celebrating birthdays. He also does not look or act 60. He is still his agile self. Engr. Rauf Adesoji Aregbesola was born in May, 1957. He had his primary and secondary education in Ondo State , and later attended The Polytechnic , Ibadan , where he studied Mechanical Engineering and graduated in 1980 . As a pupil in the primary school, Rauf was a centre -point around whom his mates hovered for guidance and direction . As a student, he was focused for remarkable performance which he made distinctively and seamlessly. In the Polytechnic, he positioned himself to conquer his environment by engaging in prolific studies.

Aregbesola has a wealth of experience garnered through wide exposure in the private sector , such as the Nigerian External Telecommunications, now renamed Nigerian Telecommunications Ltd and Lagos Airport Hotel , before establishing his own Engineering Services Company, Aurora Nigeria Limited , in 1986.

Some of the novel achievements and innovations due to Aregbesola’s visionary qualities and enterprise include the redefinition and application of new aesthetic standards to ministry blocks and offices as corporate workplaces ; vision and mission definition , annual staff retreats and modern manpower capacity building trainings; introduction of facility management practices ; pioneering achievements in PR ( ministry journal ) and IT ( website ) operation; Pioneering Private/ Public Sector Partnership Ventures ; Award- winning best practices projects ; etc. The believer and advocate of the rule of law Aregbesola ’ s belief in the sanctity of the rule of law is exemplary. Engr. Rauf Aregbesola , on the platform of the then Action Congress ( AC ) contested for the Governorship of Osun State in the April 2007 elections , and won . To be so declared, however , took close to 4 years of what must go down as one of the most titanic mandate recovery legal battles of all time ,

Ogbeni Rauf Adesoji Aregbesola , since assuming office as Governor of the State of Osun on October 27 , 2010 , has redefined the meaning of governance in the public sector , not just with symbolic posturing , but real and sustainable interventions that will presently enhance the quality of life of everyone that lives or works in the State of Osun. Rebranding of the state as the Ipinle Omoluabi ( State of the Virtuous ) started from himself, adopting the title Ogbeni , simply Mister, in deference to the singular Excellency of the Almighty God.

He is a born strategist . Throughout his life , whether as a pupil, student or career man ; political appointee or Governor, Ogbeni Rauf Adesoji Aregbesola has applied the art and science of strategy to ensure success in all endeavours in which he is engaged.