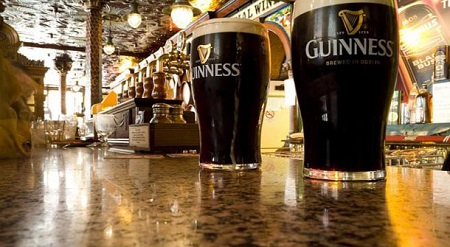 Guinness Nigeria said on Monday it was seeking shareholder approval to raise 40 billion naira ($127 million) with a rights issue of shares to strengthen its balance sheet following recent losses.
The company, which is 54 percent owned by Diageo, reported in September last year it made a pretax loss of 2.35 billion naira in the year ended June 30, its first annual loss in 30 years.
Africa’s biggest economy is in recession brought on by low oil prices, which have slashed government revenues and crippled dollar supplies in the country, frustrating businesses.
In October last year the company reported it made a further pretax loss of 2.21 billion naira in the quarter ending Sept. 30, compared with a profit of 517.6 million naira in the same period of 2015.
Shareholders will vote on the share sale on Jan. 24
Guinness Nigeria shares, which have fallen 19 percent this month, rose 2.2 percent to 68.70 naira on the Lagos bourse on Monday following news of the rights issue.
“Guinness Nigeria Plc believes the rights issue will allow the company to optimize its balance sheet improving its financial and operational flexibility,” it said in a notice to shareholders.
In October Diageo scrapped plans to lift its stake in Guinness Nigeria due to the tough conditions in one of its biggest markets for the world-famous stout. However, it granted the Nigerian unit a $95 million loan facility to help it cope with dollar shortages.
Diageo had initially planned to buy 15.7 percent of Guinness Nigeria for up to 41.37 billion naira, which would have increased its stake to 70 percent.
Guinness said on Monday it will also seek shareholder approval to allow lenders to the company to convert the debt to equity by buying stocks in the rights issue, assuming any creditor wants to switch to shares. It was not clear whether Diageo will convert its loan this way.

Indians Are Buying Over MTN Nigeria –...