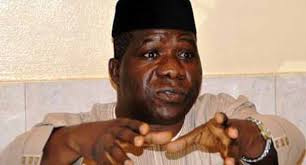 Ado-Ekiti -A former governorship aspirant in the All Progressive Congress in Ekiti State, Michael Opeyemi Bamidele was shot by yet to be identified gunmen in Ado Ekiti, this evening. MOB as popularly called was shot at the APC Secretariat in Ado Ekiti and has been rushed to the hospital just as his condition remains unknown.

Bamidele who arrived Ado-Ekiti from Abuja along with the APC candidate, Dr Kayode Fayemi a couple of hours ago. The bullets of the gunmen also hit another member of the party in the chest. Bamidele has been rushed to an unknown hospital but his condition is still unknown

Why we retained age requirements for Senate, Governorship – Ekweremadu