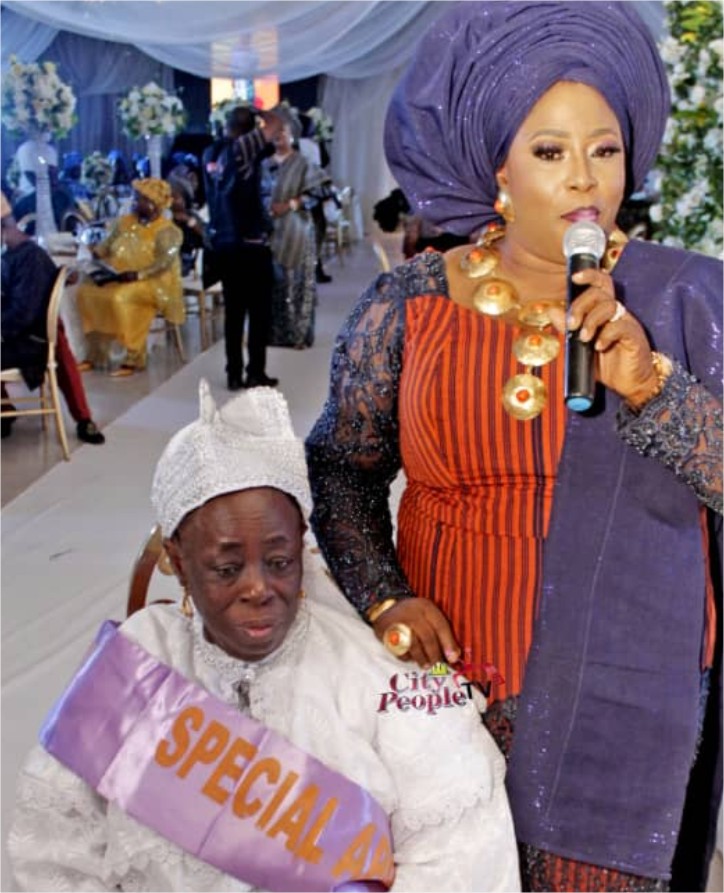 On Saturday 31st July, 2021 popular Lagos based female politician, Hon. Fateema Aduke Mohammed and siblings hold a classy 70th birthday for Mum, Mrs Margaret Mohammed (JP) in Lagos. Classy’ is the most appropriate word to describe the event. Starting from the venue, K&M Event Centre situated at No 1, Dayo Kuye Street, off Abiodun Kuye Street, New Oko-Oba, Ifako-Ijaiye down to the music, the overall entertainment, guests, security, menu, ushers and the general run of the event.

The environment was very serene but the vibe inside the auditorium was simply ecstatic from the beginning till the very end. Guests damned the traffic prone Lagos environment and trooped out en-masse to show love to their favourite female politician.

There was never a dull moment at any point in time. The love showered on Hon Fatee’s mum by all her guests only explains why she is so famous within and outside her constituency and how she has been able to impact lives positively.

City People’s Head of TV, SUNDAY ADIGUN alongside Photo Journalist, SUNDAY ADERIYE were there to bring you the gist and pictures of the event, enjoy.

CLASSY VENUE FOR A CLASSY EVENT

IT ALL STARTED WITH THANKSGIVING SERVICE

The 70th birthday party of Mrs Margaret Mohammed (JP) as organized by the children started with thanksgiving service, at the same venue, K&M Event Centre situated at 1, Dayo Kuye Street, off Abiodun Kuye Street, New Oko-Oba, Ifako-Ijaiye, with many of the officiating Ministers from Mama’s Church in attendance and it lasted for about few hours before the reception commenced properly.

Beautiful birthday girl, Mrs Margaret Mohammed looked so beautiful and elegant in her Sutanna (prayer garment), she wore for the thanksgiving service. She was accompanied into the hall triumphantly with all her family members; children, grandchildren and well-wishers.

“Many people said been a politician I have charms or any kind of spiritual fortification. I don’t have any; she is my charms; I call it the power of a praying mother. I have a praying mother. My mother prays 24 hours every day. Reason, I don’t entertain any fear. My mother can fast for 347 days out of 365 days a year. She will fast and pray. Thank you so much ma, may the lord elongate your life. You will live to celebrate more years on earth”.

The anchor of the event was at choice MC who only surfaces in classy events such as this. She is Adejoke, popularly known as Adejoke Ewaede, a woman of very few words but full of actions. Her style of anchoring is simply classy and out of this world. She gave the audience everything to cheer and also gave room for the live band to do their thing. Call her a complete professional and you will not be wrong in any way.

Mrs Margret Mohammed was born on the 27th of July 1951, to the families of Mr and Mrs Diemeta Ogbeni in a small village called Apamu in Ondo State, She started her Primary Education in LA School, Fashola Oyo State, near Oyo town.

Shortly after Nigeria got divided into four regions and everyone was told to go to their region. She proceeded to Baptist Primary School in Effrun, the old Bendel State to conclude her Primary Education. She further went to Modern School for her Secondary Education and Midwest College on completion, her father insisted she learns a trade from where she started her business, Mummy is the popular jack of all trades, and master of ALL!

She got married to a young military officer from Bornu State.

They settled down in Benin and raised a beautiful family of 4 kids. Mrs Esther Osako, Hon. Fateema Mohammed Ogunkola, Alhaji Abubakar Mohammed and Mrs Hauwa Salami. Mummy later diverted into the building materials supplies, she became a big player in the Granite and Gravel Sector, she was one of the major suppliers of RATCON and Julius Berger, she’s an active member of several granite associations and rose to the position of national secretary at the Ogbere Granite Association. Mummy is blessed with many grandchildren and great-grandchildren.

She’s an active member of the Eternal Sacred Order of Cherubim and Seraphim, where she rose to the rank of Most Senior Apostolic Mother, Mummy is a strict disciplinarian and a stickler for, what is right regardless of who you are!!!

Many who are very close to Hon Fatee have oftentimes described her to be humble and cheerful. She demonstrated this during her Mum’s birthday bash as she moved round every table to personally greet all the guests who were already seated even before the ceremonial celebrant’s entry. In her opinion, there would not be any celebration if the guests were not present; hence, the need to show gratitude to those who took out time to celebrate with her.

The former PDP Lagos gubernatorial candidate, Mr Jimi Agbaje led several other PDP big guns to the event. Mr Jimi Agbaje who is not known to be a party freak took out time to celebrate with his fellow party member. He was very much around since the beginning of the thanksgiving service. This gesture only points out how important Hon Fatee is to the PDP Lagos family as well other Lagosians too.

Their performance all through the show was breathtaking. Dressed in their police camo t-shirt and uniform, they sang every genre of music to the listening pleasure of the audience and left everyone asking for more. The guests were indeed lucky to have received such a special musical treat from this splendid band.

BEHOLD THE BEAUTIFUL CAKE OF THE CELEBRANT

Mrs Margaret Mohammed’s 70th birthday cake was beautiful to behold. It was a 3 step cake with beautiful pictures of her around it. It had the touch of black, white, sky blue and royal blue. It was an elegant birthday cake for an elegant woman. Also, there is a large fruit fountain made with varieties of fruits, ranging from apple, pineapple, watermelon, berries, coconut and many others. It was also creatively carved to form a 7 and 0 to depict mama’s new age.

One person that we can’t fail to mention is input in the success of the 70th birthday of Mrs. Margret Mohammed is the husband of Hon. Fateema, Mr. Ogunkola. He was very much busy making sure that everything goes as planned. He supported his wife in playing host to many dignitaries present.