Home News Horror: See the Shocking Moment a Gymnast Broke His Neck While Trying to Break a World Record
News

Horror: See the Shocking Moment a Gymnast Broke His Neck While Trying to Break a World Record 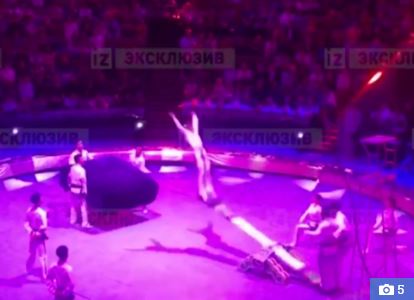 Photos have shown the sickening moment a North Korean gymnast broke his neck while trying to break a world record stunt at a circus.
According to a The Sun UK report, the accident was captured on camera as the acrobat, who has not been named, performed in front of a crowd at a circus festival named Idol-2017 in the Russian capital city of Moscow. The talented performer was trying to set a world record of performing six somersaults in the air – something which has never been done before by another athlete.
But on what was reported as his second attempt, disaster struck and the gymnast landed on his neck.
It is not known if he will be paralysed from the accident.
He was shot into the air by a larger fellow performer leaping onto the other end of a see-saw.
After being catapulted towards the rafters he shot through the air but didn’t complete his final rotation. In the aftermath, it is clear the gymnast has lost consciousness out as a result of the accident, as his colleagues come to his rescue.
They are seen carrying the teeterboard away as the crowd claps the man’s heroic attempt.
It is believed the performer was rushed to hospital, but his current condition is unknown.
Horror: See the Shocking Moment a Gymnast Broke His Neck While Trying to Break a World Record was last modified: September 18th, 2017 by Arinze Ago