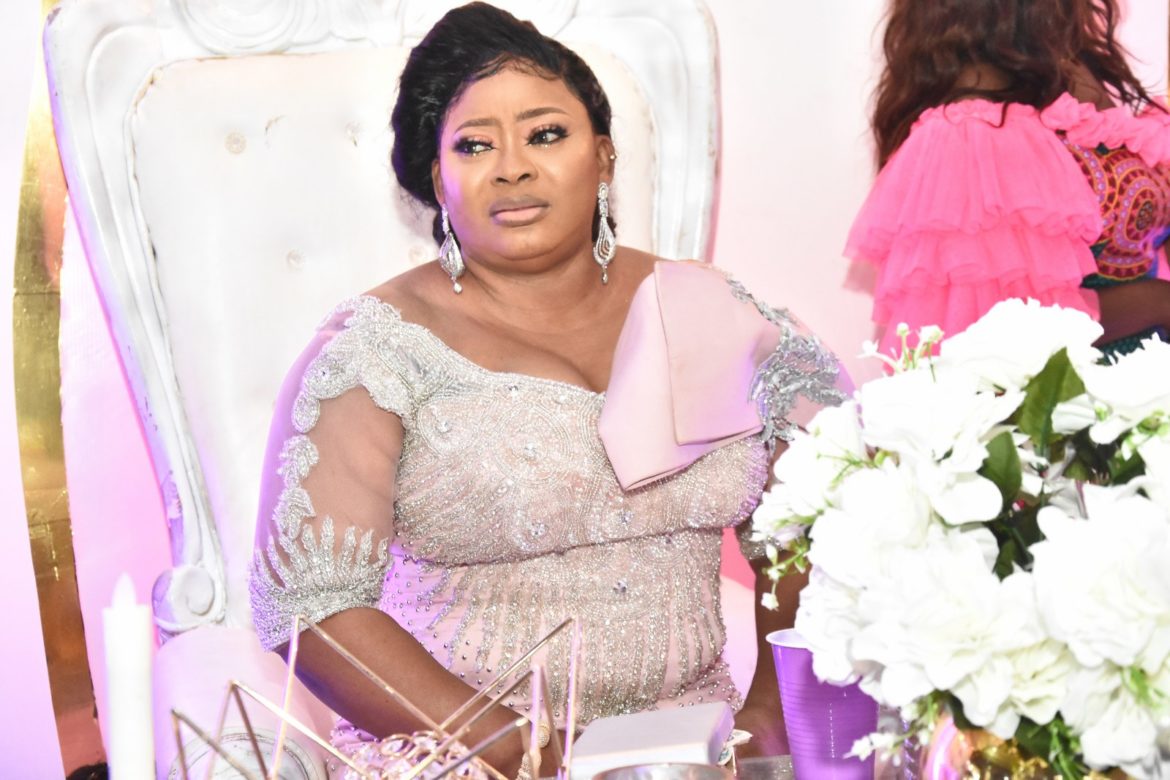 On 22nd August 2019, Alausa Ikeja was locked down as the creme-de-la-creme of Lagos gathered at the Haven Event Centre, Ikeja to celebrate with Nollywood screen diva, Ayo Adesanya, on her 2-in-1 event. Ayo celebrated her Golden Jubilee and her 25 years on stage. It was indeed a colourful event as celebrities tried to outdo themselves with their drop dead gorgeous look.

The star studded event had over 3 Aso-Ebis on display, but a baby pink lace was worn by most of her colleagues in the industry and her close friends, while some others stepped out in beautiful well designed blue and pink ankara.

The 2-in-1 party was anchored by Lolo 1 (Omotunde Adebowale) a popular OAP and Comediene and Xtreme Comedian (Oluwatosin Kupoluyi, a hilarious and top notch stand up comedian, while popular Juju act, Femi Solar and Oganla Pasuma were at the bandstand.

There were also other side attractions such as special performance from popular female drummer Ara and veteran gospel musician, Kenny St. Brown.Ayo Adesanya’s 2-in-1 event no doubt is one of Nollywood’s best parties of 2019.

Everything at the party, from decoration to food speaks of class and high taste. One of the side attractions of the party was the celebrities outfits, most of them were gorgeously dressed, despite the fact that an aso-ebi was chosen for the party.

The Aso-Ebis were beautifully designed by top Lagos designers, and this made lots of the ladies stand out of the crowd.City People Senior Showbiz Reporter, BIODUN ALAO brings your names of 50 best dressed at the Ayo Adesanya star studded 2-in-1 party.

Top celebrity designer  Abiodun Afolashade Tokunbo is the C.E.O. of Anjy Luminee Couture. She is one of the highly celebrated designers in Lagos, who designs clothes for top celebrities such as Mercy Aigbe, Olaitan Sugar and a host of others.

As usual, she equally made clothes for a good number of celebrities at Ayo Adesanya’s party. First and foremost, she designed the celebrant Ayo Adesanya’s first outfit for the party. It beautiful and well designed baby pink gown which gave her the ideal bridal look.

The gown in question was well detailed, and besides being the celebrant, the outfit made her stand out as people couldn’t help but admire her.Luminee also designed Olaitan Sugar’s outfit, a popular actress that is blessed with a very good fashion sense.

Ayo Adesanya’s second outfit was designed by another popular celebrity designer, Abimbola, the CEO of Zee Stitches. She equally designs for the likes of Ronke Odusanya, Jaiye Kuti and lots of others.Mide Funmi Martins and her best friend’s outfit were designed by Zanzee beauty and style.Sharon Ooja is one of the pretty faces in the movie industry.

Beside her good role interpretation skills, her dress sense is something lots of people admire her about her. Most times her clothes are usually designed by a celebrity fashion designer Somobysomo.Sharon Ooja was one of the best dressed ladies at the party, with her piece done by Somobysomo.

Efe Irele and Sophia Alakija were not left out in the list, they both also stood out in the Aso-Ebi designed by Sisinosa.Sexy mother of two Iyabo Ojo was looking sweet 16 as usual  in an outfit designed by Tushy Wardrobe.

Lolade Omotolani Lawal’s Aso-Ebi was designed by Reo Couture.Laide Bakare stepped out in the Aso-Ebi designed by Bay Unique stylist with coral beads by Bims World, which complimented her looks for the night. Foluke Daramola’s outfit was designed by Kemi Signature while Mrs.

Apoesho Olawunmi popularly known as Diganga’s dress was designed by Glitters in Akure Ondo State.Ageless actress, Fathia Balogun was looking stunning in a designed outfit by Becka Signature while Cynthia Animashaun popularly known as Pinky, is also the C.E.O. of House of TL and she designed her beautiful outfit for the event.Multi-talented actress, comediene and OAP Omotunde popular known as Lolo 1 beautiful aso-ebi was designed by Ovein, she was one of the anchors of the event, and she did a great job, as she gave rib-cracking jones in between the event, making everywhere lively and funfilled.

Popular Ogun State based actress, Bose Aregbesola’s attire was designed by Adesewa Fashion World. Beautiful Funmilayo Arowosoge’s Clothes was designed by Wearente Clothes. Oluwakomiyo aso-ebi was no doubt, one of the best for the event and it was designed by Azenath Wears. The designer also designed some of the beautiful clothes Ayo Adesanya used for her photo shoot.