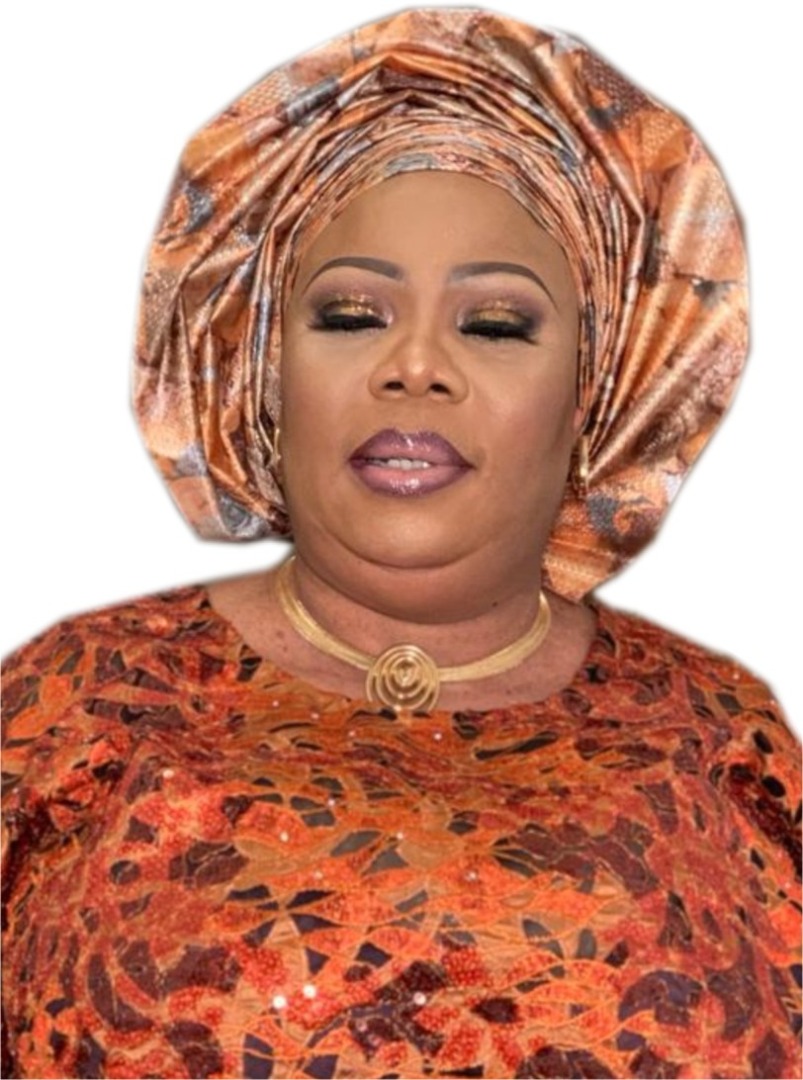 Cheerfulness is in her eyes and heart anytime she smiles to people around her. She smiles to people with good faith and with gesture. Even when she is busy, her beneficiaries keep knocking at her door for help both in the morning and in the night.

She is often a buoy; to what is written in the scripture to woman that believes philanthropy is aptly fortune to enrich people around.

Despite her troubled years of growing up in the heart of Isale Eko, and eventually standing tall, Abeni Alagbo as most people call her is always optimistic about life.

However, when we talk about Nigerians in Diaspra, nobody can doubt the legacy of this socialite, who has done tremendous feat to people’s life. As her name keeps echoing like whistle in time of turbulence and distress to those that come to her.

Moshebolatan Abeni Onabanjo is a name to always reckon with when we talk about herbal medicine in the diaspora. Abeni Alagbo as she is fondly called has spread her business across her borders without any prejudice. She recently spoke to City People on the journey so far and how her Agbo business is spreading tentacles across the world. Enjoy excerpts

Here is how become Abeni ALagbo, when I was living in America, things were so rough. I had nothing and I wasn’t okay at all. So I went to Canada. I went to school in Canada. I went to care givers school called PSW, Nursing Assistant. When I finished from the school, It wasn’t up to one year that I got to Canada that I got my papers as a Canadian, so I moved from Montreal to Toronto.

I was working there, taking care of the aged and disabled who could not urinate or pass faeces on their own. I was cleaning them up and bathing them.

One day I went to work to take care of a little Indian girl call Anu. They said I have come too early that I should go and come back. So I decided to remain in the car while I wait for the scheduled time. But the woman insisted that I should leave the premise. In fact it was my company that called me and told me to leave the area totally.

I was shocked the following day when they informed me that I have been fired. I was very shocked. That I can be sacked for coming early to work?

On my way home I was crying. I now called one of my best friend called Ariyike, I called my son too. And they both asked me to calm down and come home.

By the time I got home, they pacified me and encourage me to start Agbo business. So thought one of my sisters in Houston, America called Ewa. She selling agbo nd she’s doing well.

So I called Nigeria, one of my people here called Aare added to the money I have and we sent to Nigeria. They now help me bring the agbo by cargo. That is how I started. Thought I had little idea about it that time, but they wrote the direction and that each mediation does one after the other.

And I also prepare Amala, Gbegiri and Ewudu. I have Amala spot at most parties, people invite me to sell Amala and agbo for them. That is how Abeni Alagbo came up.

We recently heard your husband was kidnapped. Can you share the experience

My husband is a farmer now. He stayed in America for many years before he came to Nigeria to set up oil business. He was into many business though but the major mean of income about that time was petroleum, At a point, he was framed that he’s into bunkering business and he was sent to kirikiri. By the time he got out of the case, he decided to start a farming business in Agbowa. He had many pigs, cows, chickens and all types of plants.

On that day, he was about to enter his office before he was abducted. He called one of his brothers called Jago. So, he’s the one that informed everyone that he’s been abducted. Everybody started contributing money as the kidnappers were asking for 100 million naira. He was begging his family to sell his properties so he could be released from all the tortures in the hands of the kidnappers.

At the end of the day we were able to realise 16 million and he was released, but he was seriously battered. We had to rush him to the hospital. But thank God, he’s doing fine. He even marked his birthday this month April 2nd. We thank God for him.

How is your Agbo business doing in Canada?

My business here in Canada is doing so well. I have a shop here that is booming to the glory of God. I also have a restaurant.

My agbo is on point, we have a lot of brands, Belorie, Fodon, Mawojue, Japata.. These are my herbal mixtures and they are tested and trusted. I even send to America, and some states in Canada and London.

The least of my product is agbo jedi jedi, Opa eyin and arumoleegun. Arthritis and diabetis. I have a mixture that can contain diabetes if you keep to all the dietary instructions.

Can you tell us what inspired your viral video during ENDSARS

What birthed the trending video during end sars protest is a long story. When I was young I was very stubborn. At a point, my father concluded that he as taking me to welfare. My mother did not allow him, but suggested that they take me to Alakara Police station. They felt I needed a very harsh treatment and experience to act and behave like a girl should. So I was taken to Alakara Police station. My father and mother were well-learned.

Then we were living at New Balogun Street, Fadeyi, Odi Olowo. I will cross from there to Akala.

Eventually, I began to like it there and the police station became my home. I will help criminals to write statements and I will run errands for the officers and the people in detention.

At a point I started helping the criminals to buy Indian hemp. I became tougher and more stubborn instead. I got the freedom that my father never give me.

My parents saw that my stay in Alakara was only making the matter worse and they came to get me out of the station; this is an offer that I refused blatantly. I told them that I was never coming back home, that I was learning there at the police station. After going back and forth, we decided with the DPO of the station that I will go home, but I will be resuming at the station every morning and go back home in the evening.

I was happy with the resolution.

Whenever I wake up in the morning. I don’t do anything. I just jump off and run down to the station. I was having a nice time at the station.

My mother was working at Igbobi orthopaedic hospital. While my father was an accountancy supervisor at CAC then.

So, they said I am bringing shame to them. So, my maternal grandmother who are from Saba Isale EKo suggested that she takes me to Isale EKo. She said they will grill me and transform me. Unfortunately, that was where I became a full blown street girl. My grandmother could not control me in anyway, she has only one room, so we sleep on the balcony every night. There is a store at the backyard that we turned into a bedroom, whoever gets home first at night sleeps there. When we must have gone out to dace to Tajudeen Ishola, Alani Musibau at Ebute. We would go to Arcade. Kenery. We would have toured everywhere during the day, by dusk we may sleep in front to the popular mosque in Saba till morning.

Later, I became one of the children of Oba Oyekan, who was Lagos king back then. It was Oba Oyekan that trained me. His wife, Iya Boopo was the one who was giving us food. We usually sleep there with some of the deportees. Oba Oyekan enjoyed the support of the youths in those days. We stay with him and support him in all that he does. Things are different in Lagos Island now. All the places we used the sleep are now used as swimming pool at the Lagos palace.

That’s why I was angry. I have only one child. Imagine if he’s in Nigeria and he’s part of the protest. What do you think will happen to me if he was shot?

I know all of them and I can tell you all these politicians are not dependable. That was why I did the video to attack all the politicians. They will be nice before they get to power but once they get there, the story will be different.

Why did you chose to celebrate your last birthday, you have not been celebrating birthday for a long time?

The reason why I am celebrating my birthday in a different way this year is because, all through my life, I have never been this comfortable. God made all things new and I am so happy. I that used to beg for people to give me money, I am now the one giving people stuff. I feel great over 50.

Despite the fact that I am over 50, I feel great I take care of my body and watch my diet and hygiene. I also like to dress glamorously.

Who are your caucus in Canada?

My best friend in Canada is Asuke Omotunde Wahab. She’s my best friend. She’s always there for me and I will never forget her. My younger sister too, Ariyike Maryam, she’s naughty but very lively. And Bolaji Abeke. She’s my little sister too. The three women always got my back, Eyinju Eledumare is my adopted daughter, she’s a blogger too and she’s been a loving daughter so far. Adetola Aduke Adesanya, she’s my inlaw, she stays in Chicago. She’s the one that let a lot of people know that I sell Agbo and Ponmo. She markets my products freely. I love her so much too. My son is also my friend. Awal Agboola Alade Onabanjo.