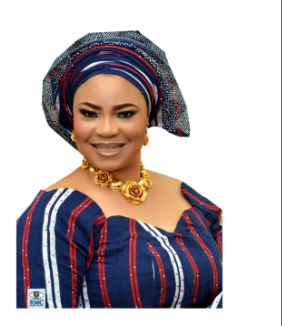 Oloori Sandra Thomas is a successful businesswoman in Lagos. She is the sole distributor of Makari skin products in Nigeria. The journey started for her 15 years ago after the delivery of her baby, her skin became bad, after so much consultation and enquiries, with the help of her cosmetologist, she decided to give Makari a trial, which eventually transformed her skin, and she was named one of most successful black people by the company, she was encouraged to go into the business, which initially, she was reluctant, eventually she did, and 15 years into the business, she became so successful and well known in the business, within and outside the country.

I think it is just peace of mind, prayers and I really take care of my skin. I see that as a priority.

Would you say, that is what inspired your business?

Honestly, I didn’t have a good skin from the beginning, at a time, I woke up and asked myself, why should my skin be like this, I made enquiries ask questions, and the result was what brought in my business today Mukharee.

How did the business start for you?

It is actually pronounced Mukharee, but because a lot of people feel, the simplest way to pronounce it is Makari, so I had to flow with that as well. It all started when I was in the U.S. 15 years ago, I just had a baby at that time, and my skin was really bad, and there was this particular cream, I was using then, I don’t want to mention the name, when I went to get it at the store. I was told, it has been taken off the store because it contains hydroquinone and other ingredients that were dangerous for the skin. I wanted to use something that works for me, and don’t contain such dangerous ingredient, I explained all that to my dermatologist, so I told her, I saw Mukharee on the website, and she was like I have heard about it, let us give it a try, I think it is good, so I ordered online, when the package arrived, I use it for a year, and people were asking me what I was using, you know at times, when you are using something, personally you might not know how good or effective it is, until people start complimenting.

So I started getting lots of compliment from lots of people. So I sent my pictures to the company, my before and after look, they were really amazed at the result, they were like, this is huge, they actually put me on their profile, among the most successful black people for a period of time, they couldn’t believe the transformation, so they were the ones that suggested, I should start the business in Nigeria. I told them, I don’t live in Nigeria, it is from the U.S. to South Africa, and they kept encouraging me to give it a shot, that it might work out and here we are today, all thanks and glory be to God Almighty.

It has not been easy at all, we have all sorts of issues, ranging from Nepa, Landlord, because I don’t have a whole building to myself for the business. We have issues with the Landlord who feels you are making it, and there is a need to jack up or increase the rents at will.

Then the government chasing for this and that, and the most difficult of them all Nepa. These products are not products you can put in a hot environment, it has to be constantly in a cool place, so we need to spend so much on diesel, then lots of delay at the Airport, because I don’t put my products inside a container because of the unnecessary delay on the sea for long, it won’t work, so it has to be through flight, and that is pretty expensive, then at times, there is delay with customs, so the challenges are so numerous, but I thank God, we are still standing.

How was the business, when you started, was it accepted immediately?

initially, when I started 15 years ago, I started selling from South Africa, I started selling when I didn’t even own a store. I started doing it, as a per time business my kids were still very young and still in school, so I kept telling myself, am I sure I can do this? Initially, it didn’t work, so I had to work extra, for people to start accepting it. So when I eventually opened the store, people were still doubting me, so they keep coming to me, but when they see my skin, and they know, that is what I was and also they see my before and after picture really did a lot of work for me in the business, so people were like if your skin can go from being like this to this, then it will work for them as well. They see that it was huge, and it convinces them.

What should we expect from the company in the next few years?

It is a company, that keeps bringing in new products, they don’t do too much. You know the quality is not cheap, so they release according to their clients’ needs, so when they know their clients are clamouring for something, they go for it, they work towards it and give in, the best, so in the next future, they are still going to here.

How experience is Mukharee, for lots of people that want to patronise you?

How I Became The Sole Distributor Of MAKARI In NIGERIA was last modified: October 1st, 2018 by Biodun Alao

Why I Usually Play The Role Of KING In Epic Movies