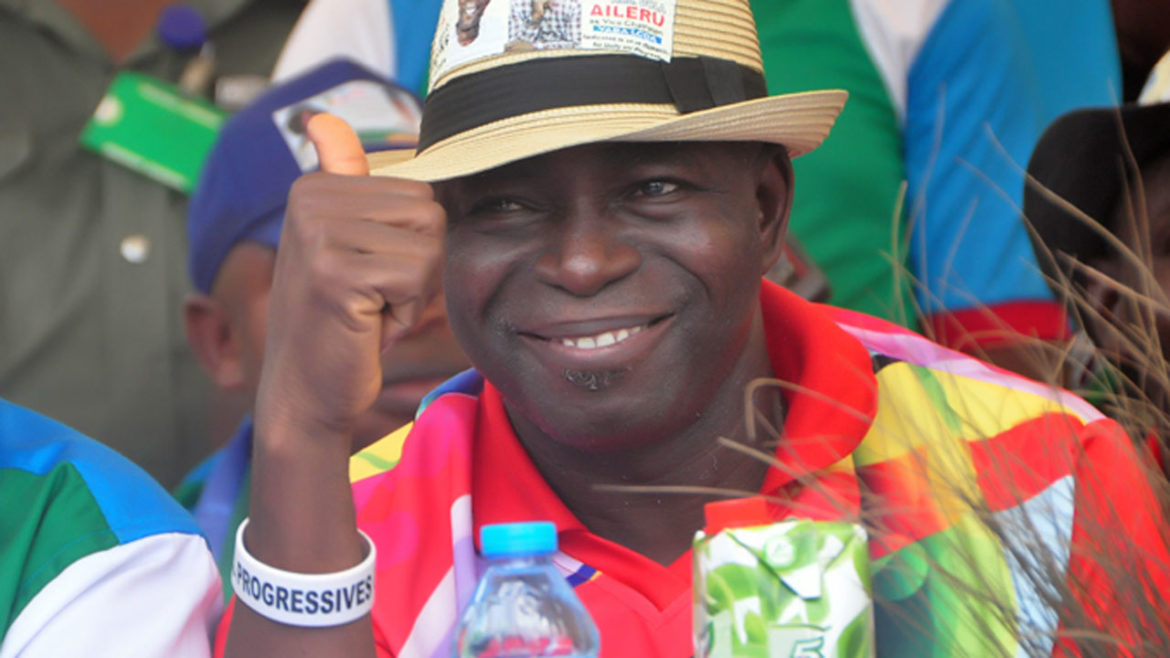 It is not all the time that you meet top public office holders who go about their work without a single chip on their shoulders. Often times, you get the impression some of them have a bit of arrogance about them that leaves people with unpleasant memories of their meeting. But certainly not Hon. Kayode Omiyale, the chairman of Yaba LCDA.

From the moment you step into his office, you know right away that you’re with a man who has no time for frivolities. He just wants to do his job and get the results that he desires. His humility and unassuming nature immediately endears him to you once you meet him first time.

Hon. Kayode Omiyale is a self made man. He was born in Ebute -Meta and has lived his entire life right there on the Mainland. Through thick and thin, he fought hard hard to overcome all of the challenges that life flung at him.

Following completion of his primary education, he headed straight to the Teachers Training College where he distinguished himself and earned the prestigious Grade 2 Teachers certificate. Not satisfied, he decided he had to go back to school.

Today, Hon. Omiyale has a Bsc. in Business Administration and a Masters in Public Administration. He rose steadily through the ranks and soon got to the pinnacle of his career when he was elevated to the position of Director of Education, level 17.

He retired in 2017. But he wanted more. He felt there was still a lot he could offer his community. And when the opportunity came, he made himself available for the position of Chairman, Yaba LCDA and contested for the election and by July 26th, 2017, he was sworn in as the new chairman.

Last week, City People’s Senior Editor, WALE LAWAL was a guest of the amiable chairman. He took us through his humble beginning and how he has turned things around in Yaba LCDA within two years. Enjoy the excerpts.

You have lived most of your life within the mainland, how was it like back then for you as a young man growing up in this locality?

The teachers were there for us. We also had centers where pupils were taught other vocations outside of academics. The environment was encouraging at that time. By the time I began my teaching career, I still met a little bit of that system. The students were matured, and the attitude of teachers to work was also impressive then. I think the system was a little better than what we’re experiencing now.

From my interaction with you, sir, you’re somebody who could’ve gone into any related field of your choice, but you chose teaching. Why teaching? What was the passion?

The major thing that brought me to teaching was finance. Things were tough. I didn’t have parents, all I had was a brother who took me up and decided to train me. We are from same father but different mothers. In fairness to him, he did his best for me.

He sent me to primary school and from there to Teachers Training College. As at that time, the teachers training programme under former governor of Lagos state, Alhaji Lateef Jakande was free.

There was free accommodation, free tuition. Teachers were well taken care of at that time. Then, by the time you passed out from Grade 2, you’re automatically on the job. In fact, by the time you’re in your final year, you start collecting salary.

We were even paid for the teaching practice. So, it was cheaper at that time. Once you were done with your Grade 2, you didn’t need to write an application, you report directly to the classroom and start work. But I would be sincere with you, I didn’t want to be a teacher then.

But that was as far as my brother who trained me could go financially. But today, I thank God because in 1999 when I was appointed as Education Secretary, it was only because I had Grade 2 certificate.

If you do not have that teaching background, you will never be appointed as Education Secretary, even though as at that time I already had my Bsc. in Business Administration and my Masters in Public Administration. And that was how I started my political career.

Looking back, sir, what would you ascribe to be the pinnacle of your teaching career?

That certainly has to be when I was appointed as Education Secretary. Reason is that at that time I was on level 9 and in the primary school we had level 10, level 12, level 13 as head teachers of the school. But, I guess because of my political experience, they chose someone like me to go and be the boss over people on level 12, level 13.

It was a big challenge but I was able to cope because all the head teachers loved me. I respected them and they respected me in return. It’s just like in the civil service, getting appointed as Perm. Sec is the pinnacle. Same way in the primary school system, once you’re appointed as Education Secretary, then you have achieved your target.

Lets talk about your transition from teaching to politics. At what point did you decide that you were going to venture into politics? What formed that decision?

When I was running my degree programme, I didn’t have anybody to assist me. I felt that I had a lot of politicians around me and that through them I could get connections that could open doors for me. And so, I decided I should join politics.

I believed that by that doing that, I would meet House of Assembly members, meet council chairmen and that if I tendered to them my degrees, they would get me a good job. I didn’t expect I would remain in politics till now, I only joined politics because I wanted a job.

But when I joined, I had to start from the scratch. I started pasting posters all over the place, like many other young men were assigned to do. While pasting posters within the community, people saw me. My pupils in the school saw me and everyone was making jest of me.

People were wondering why me, a teacher, could descend so low as to following politicians all about. It was until when I was appointed as Education Secretary through politics, that was when it dawned on everyone that I knew what I was doing. And people started respecting me.

What were the immediate challenges you met on ground when you assumed office as chairman in 2017?

The major one was that, at the time I came in, the IGR was so low. You know we took over from the interim administrator. And as a sole administrator, there was little he could do.

So, the IGR was at its lowest level. There weren’t people who could go out to jeer people up to pay their dues to the local government and improve the IGR. Thank God the allocation was regular. In Lagos here, we are given what is due to us, despite the introduction of the NFIU.

Before that, Lagos Sstate had been doing what they were supposed to do. So, it was the allocation that was some sort of bail out for us. So, we had to sit down, draw up strategies and started improving the IGR bit by bit. We had to put all the councilors and supervisors on the field to go and generate funds and then we started getting little results.

Another one was the environmental sanitation. The situation was really bad. And just a few months when we came in, the state introduced a new policy, the Cleaner Lagos Initiative, that’s the Vision Scape, they came on board and government jettisoned the PSP. It was a serious challenge.

As that time when we came in, monthly we spent about N650,000 on palliative measures to the work of the PSP. But by the time the Vision Scape came in, we had to triple our allocation to the environment.and it hit about N3m every month because the Vision Scape could not cover everywhere. Another was the attitude of the people.

By the time we came into the council, the orientation of the people was, let us go the council and collect our own share of the allocation. They don’t expect you to do anything with the allocation, just share it. That’s why when we came in, under our first 100 hundred days, we had to put together a poverty alleviation programme together where we bought equipments for the mechanics, the hairdressers, vulcanizers, carpenters, plumbers and so on.

I’m talking about N10m worth of equipments that we had to distribute to the artisans. We also constructed about three roads and also did about three eyes screening programmes with other NGOs that cost us a lot of money. We did all these just so that people will know we are no longer under an interim government. And we carried them along.

Yaba is an area that is known to have a large concentration of various tribes from different parts of the country, How have you been able to bring together the Igbos, Yoruba and Hausa people in the community?

We always to have stakeholders meeting here once in a while. Like Makoko, they’re predominantly Egun people from Badagry side. The Ilajes, the Ijaws are all there. We organise stakeholders forum where all the tribes and other major stakeholders like members of the CDA, the market women, the artisans, will all come together and we discuss. Same for the Igbos, the Arewas, they all attend the forum. We bring all the three major tribes together and we’re able to carry ourselves along. And thank God, there has been relative peace in Yaba.

You have already mentioned some of the little things you have been able to achieve within the short period you’ve been in power, can you take us through a few others?

Well, like I always say to people, these achievements are not by power and are not by might, but by the grace of God. In terms of road construction, we have constructed about five roads. They are Ajayi Bembe, Amusa street and Obadina. We did Church street by Igbehinadun, then we have Ishola and Tokunbo.

These are major roads that we were able to construct. We also built a state-of-art health center at Makoko and even though it has not been officially commissioned, we have begun skeletal work there. In terms of Education, since we came on board, we have been giving out free JAMB forms and GCE forms to indigent students. We also give out free exercise books to primary schools.

We had free eyes screening programme and offered free surgery to about 20 eye patients. In the area of poverty alleviation, like I said earlier, under our first 100 hundred days, we spent almost N10m buying tools and equipment for various artisans. Every other month, we assemble 100 aged people, 20 widows inclusive and we give them about N10,000 as stipends every month.

You seem to have a passion for always trying to put smiles on the faces of the needy. Where did you get that from?

We know what our people need and thank God we run an open door policy. People are allowed to come in to give us suggestions and advice. And above all, our party, the All Progressives Congress, is a welfarism party. They have people oriented programmes and we bring in the policies of the party into our activities which is what has enabled us to go far.

Why I Have Remained In Active Journalism 43 Yrs After – LONDON Based Publisher, KAYODE SOYINKA