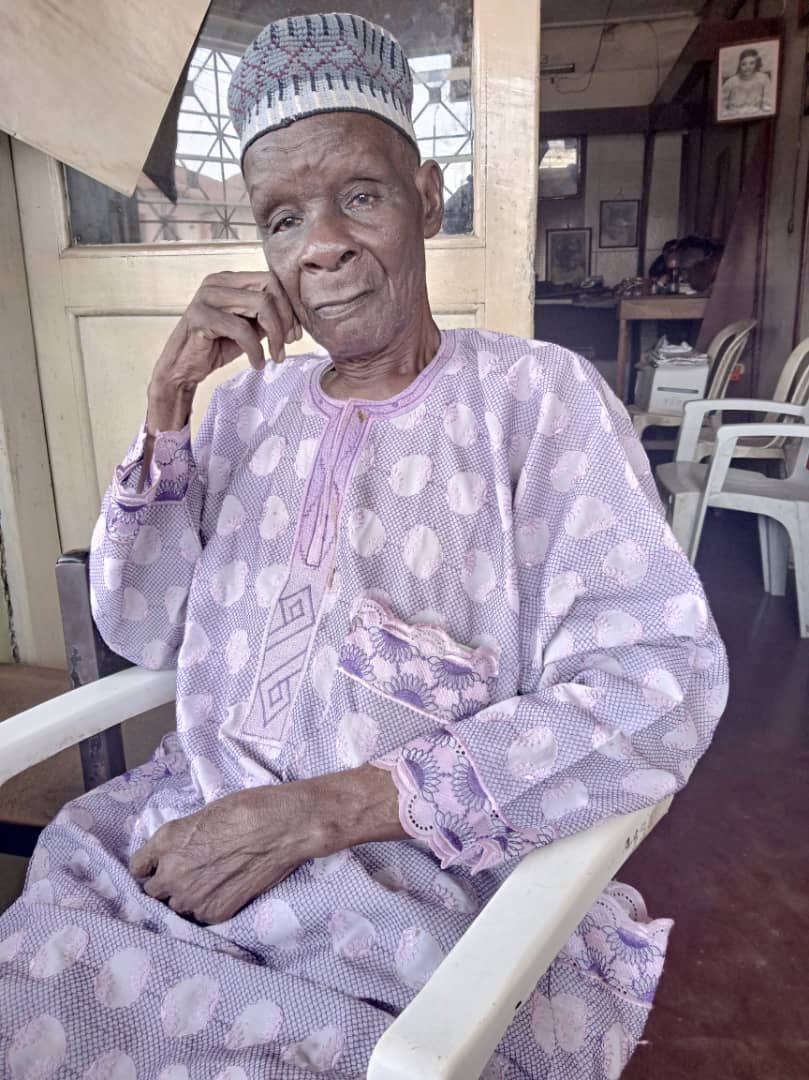 Some weeks ago, a veteran journalist and the Ekefa Olubadan of Ibadanland, Oloye Lekan Alabi posted on social media the photo he took with the Ibadan-based popular photographer, Pa David Owolabi Ositelu popularly known as ‘Born Photo’. The said photo, according to the Ibadan high chief, was taken at Pa Ositelu’s Photo Studio, located at Isale-osi area of Ibadan, during the presentation of a copy of his biography, “OLOYE ‘LEKAN ALABI, AN UNBELIEVABLE LIFE”, authored by Professor O.B.C Nwolise, a former Head of the Political Science Department of the University of Ibadan. The photo didn’t only go viral but has also generated a lot of reactions from far and near and across various social media and news platforms.

It has also, consciously or unconsciously, sparked up a discourse, and the main point seems to be tilted towards one direction, ‘why should our heroes be left to die before we celebrate them’?

While some were curious if anything bad had not happened to born Photo, others who don’t really know much about him were surprised to hear that the man behind the popular photo studio, born Photo is still very much alive (may he live many more years on earth).

It was on the above reasons that City People’s Correspondent, DARE ADENIRAN (08057639079) sought an interview session with Pa Ositelu, which was gracefully granted. And for about an hour, the highly audacious septuagenarian (though he was not so sure about his age due to lack of records of his birth) took the reporter through his very humble beginnings. How he was forced to learn photography due to the elder brother’s inability to continue paying his school fees after form 3. How he came to Ibadan with two shirts, two short knickers and a pair of tennis shoes. It is quite amazing how Pa Ositelu was able to make a name for himself despite all the changes of life he had to battle with. So much that virtually all Ibadan top celebrities born in the 60s and 70s, at one point or the other, took either short or full portrait photographs at ‘Born Photo’.

The Ogere-Remo, Ogun State, born Pa Ositelu is an audacious man. His achievements, his tenacity are remarkable. For a man who is never a soldier but was at the war during the biafran war in 1967, doing what he knows how to do best, means he is indeed a living hero in his profession. Very prominent was Born Photo back then that he was the one taking pictures for the likes of Late Chief Obafemi Awolowo, Akintola and co at campaign grounds. Above all, Baba is a good Christian, and that was noticed during the interaction as he was constantly referencing God in his words. He attends Agbeni Methodist Church, Ibadan.

Below are the excerpts of the interview. It is quite revealing and interesting. Read on.

Baba, tell us the story behind Born Photo?

My son, all I can say is, it’s a project signed, sealed and delivered by God. God has been so kind to me.

How did it all start for you as a photographer?

Am the last born of the family. I was born and bred in Agege, Lagos State. I attended Bishop Oluwole Memorial School for my primary school education, and Eko Boys High School. But unfortunately, I couldn’t go beyond form 3. My elder brother who was paying my school fees got married and couldn’t continue paying. Our school fees back then was 1 pound 250. He was the typist at a popular Cocoa merchant company. He was later to become a minister in Lagos in the old western region. He was the one who advised me to come to Ibadan and learn photography from his photographer, who he always takes photos from whenever he was in Ibadan to see his girlfriend. Hope Photo Studio, at Agbokojo area of Ibadan. That my elder brother had a friend who he used to sleep in his house when he comes to Ibadan, behind Ibadan Boys High School, directly at the back of Late Chief Awolowo at Oke-Bola. He took me there to be living with him, Mr Omoyele. He was a surveyor.

Can you still remember some of your classmates at Bishop Oluwole?

Did I tell you that I was a good footballer in school? I played football so well and also involved in other games too. My mates then include Ojulari Kosoko, Lateef Kosegbe, Monsuru Nuru, Bashir, Akanke Oni and others.

So how easy or difficult was it for you getting use to the new environment in Ibadan?

How many of the experiences do I have to talk about. Is it that had only two shirts, two khaki knickers and a pair of ‘ronacan’ tennis shoes? Or that after two months my brother brought me to Ibadan, Mr Omoyele was transferred to Oyo?

The man left Ibadan for Oyo the next day I got wind of his transfer. So I was left with no option than to seek favor from our landlord, an Ibadan, and the Manager at the Nigerian Tobacco Company (NTC). Who I was always help to unloads his luggage from car boot whenever he comes home on weekends. He gave the grace of sleeping at the passage of the house. I would spread my mat at night then rolled it up in the morning and put it behind the backdoor. So that people won’t see it. For 4 and half years, I didn’t see my brother. I was able to survive those years by God’s grace and my goodwill. I was always going to our boss’ wife’s place who was selling food to eat, when we close at shop by 8pm. I was helping her to fetch water and grind pepper.

What happened after your graduation?

We were four that graduated from our boss’ the same day. Baba Photo, Roland and the other one that I can’t remember his name now. After 4 years of apprenticeship, I went back to my brother, to show gratitude and seek his support for me to able to buy camera. The camera back then was 34 pounds. He couldn’t help, he only gave me transport fare back to Ibadan. In fact, I could remember vividly, I slept at Agege Post Office till the next that I left for Ibadan.

It, however, took me more than a year before I could raised money for the camera. I even worked at Dugbe Post Office, as a dispatch rider around 1959. I did it for about five months, my interest was just in photography. I later went to Oyo to do ‘joinman’ with a senior on the job. Sadly, he had more than 30 apprentices so I couldn’t stay long. He had to refer me to his own senior in Modakeke, Senior Olu. But all in all, God has really blessed me on this job. I am a master in this trade. I later came back to Ibadan and bought my own camera in 1969. I couldn’t sleep that day, I was so happy. My first major work came through a friend. It was a sendoff group photographs at the Wesley College, Elekuro, Ibadan. It came out well and that was how they started giving me jobs.

At what point did you open your own photo studio?

That was around 1963. I set up the studio with 15 pounds that year. The whole place was market with just two shops when I came here.

Why the name, Born Photo?

It was after I had opened this place that God revealed the name to me. I was sleeping over there (pointing to the other side of the studio) when I had a dream and saw heaven opened. I saw Born Photo boldly written on it in my dream. That was how I got the name. It was even a piece of chalk that I used to write the name on the wall outside.

Which would you say was your big break as a photographer?

None. Those who made me are the Ibadan women and students. May the Lord continue to bless the land.

Tell us more about your family background?

I’m from Ogere-Remo in Ogun State. My father is late Jagun Isiah Ositelu, my mother is late Janet Efunlaarin Ositelu. I am married to one wife and we are blessed with children. My wife died last year December.