How I Survived My Marriage Break Up – Star Actress, DAMILOLA ADEGBITE 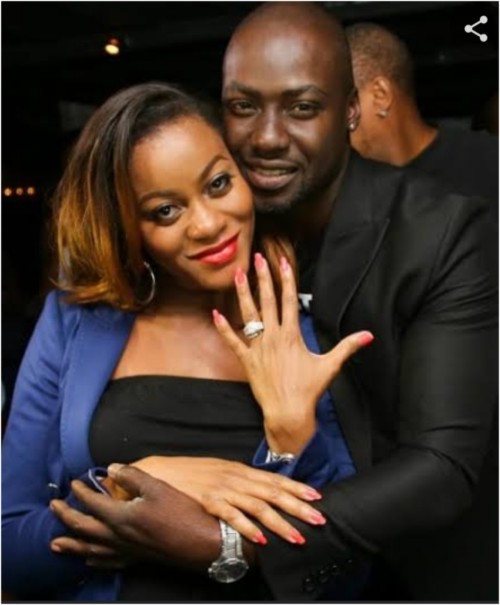 The delectable star actress, Damilola Adegbite is one of the finest faces in the movie industry, though she maintains a very private lifestyle.

She became very popular with her role as Thelema Duke in the popular Mnet series Tinsel, one character many always watch out for.

Many were so happy when she tied the knot with Chris Attoh, a Ghanaian actor who features regularly in Nollywood movies. Their love was like that made in heaven. They both met on the set of Tinsel, got engaged in 2014 and welcomed their son Brian, a month later.

They tied the knot on February 14, 2015 at a private wedding at the La Villa Boutique Hotel in Accra, Ghana.

Three years into their marriage, the once celebrated love crashed and the news went viral. They both kept mute about the breakup probably to avoid unnecessary drama, most especially because of the child involved.

In September 2017, Chris Attoh finally admitted that his marriage to the pretty actress was over.

He went ahead to marry an American, Bettie Jennifer, who unfortunately was shot dead in May 2019.

It was later revealed by the U.S. Police that the late Bettie was married to two different men at the same time and one of the men was a convicted Baltimore drug lord.

The actor also got married to a U.S. based investment banker, Chinecherem Eze. They had a secret court wedding in California in April while the traditional rites took place on May 1, 2021, making it his third marriage in 6 years.

Damilola, on the other hand, has kept mute about everything, dedicating her time to raising her son.

Even though their break-up came as a rude shock to lots of their fans and admirers, it is one divorce that wasn’t mired in controversy.

Shortly after their divorce became public,  the Ghanaian actor went live on radio to speak about the essence of marriage. He said respect, forgiveness and submission are vital things expected from a woman.

He went further to explain that a man is comfortable alone but if he finds a woman, that means he has found a good thing, a plus to his destiny.

He also added that women need to trust the captain of the ship, which is an important factor for peace to reign in the home and that a woman who does not submit to her husband and trust his instincts is not going to be successful in marriage.

He denied the allegation of infidelity saying he never cheated, as there was no reason for him to cheat.

Damilola, on the other hand, never talked about her failed marriage but shared a message on her Instagram page which indirectly explained her own side of the story. According to her, “2017 was a tough year for me, one of the toughest of my life. My trust was betrayed in heartbreaking ways and I had to go through some very painful overwhelming changes, but in all this, I am eternally grateful because who I become crystal clear to me”.

She added that she is determined to stay positive and cheerful while the Law of Karma sorts things out for her.

They both have since moved on, remained cordial and even exchanged birthday wishes in 2018.

4 years after her marriage breakup, Damilola opened up on what caused it and how she has been able to cope with the breakup, in an interview with Chude. She also talked about reasons why she constantly refused to grant interviews because she thought they would cause her more harm than good.

When asked what happened to her marriage, she had this to say, “I don’t regret things in life.

Everything that happens in life, is for a reason, do you know I never shed any tears for my divorce? The problem most ladies have is that they expect too much from their partners which I never did, so a lot of pain and emptiness we experience from the relationship is because we are expecting so much from our partners.

Love is not enough when you meet someone and want to spend the rest of your life with him. Love is just one of the qualities that you need, but it is not everything.

Before you decide to get a divorce, you would have prepared yourself for the worst, so it is not really getting the divorce that becomes an issue but the aftermath of the divorce. Questions like what will people say? What will people do? It is a tough struggle”.

She also added that a failed marriage is not the tragedy people make it out to be. “Not every marriage is ordained by God. Nobody desires to go into any marriage and get divorce few years into the marriage.”

She talked about how she had fought and prayed so hard right to the end of the marriage and within herself, she knows she put in her best but it just didn’t work.

“But in all, whatever life throws at us, we learn to dance with it.”

According to her “you just have to ride the wave, just be strong and ride it, if that is what you have found yourself in”.

When asked about her son? She said “questions are already coming in from him, like: “why is daddy not here?” and other things, but I will let out all the information to him when he is old enough to understand. He is just 7 years now but won’t continue to be 7 years but for now, there are limits to the things he can know”.

How I Survived My Marriage Break Up – Star Actress, DAMILOLA ADEGBITE was last modified: November 10th, 2021 by City People