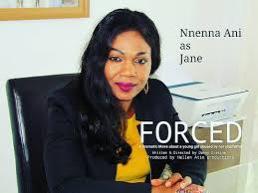 Amongst movie practitioners in the UK her name instantly rings a bell.She is a multi Award winning Actor from Nigeria, based in the UK.
She started her career from stage performance at the age of 12.And she is currently working as an Actor, stage performer and stage Director.

That is Nnenna Ani for you.She is a very hard working lady who has starred in many top Nollywood productions and British films. She is known for her Lead role in the Award winning movie, Oga Detective as Nino Brown (Directed by Francis Uwadi. Nnenna is also known for her swagger acting and comedy child’s play.

She recently completed a British film called Forced, directed by Danny Erskine. Nnenna stared along with Ghanaian Actor Ecow Smith Asante, playing lead in the film. Nnenna has been lucky with film roles in the industry. She played lead in the Fiłm passport sake which was premiered in London, October 16th 2021 then Nigeria premiere will take place December 18th in Asaba Nigeria.

Nnenna has been blessed with many Awards for her great efforts in Acting, she is under management by Nice Business Uk management for the pass seven years. She currently owns an Award bodied with British Entertainer Danny Erskine called NELAS Awards Uk.

How I Survived My Marriage Break Up – Star Actress, DAMILOLA ADEGBITE

Why AMAECHI Has Not Been Visible In...