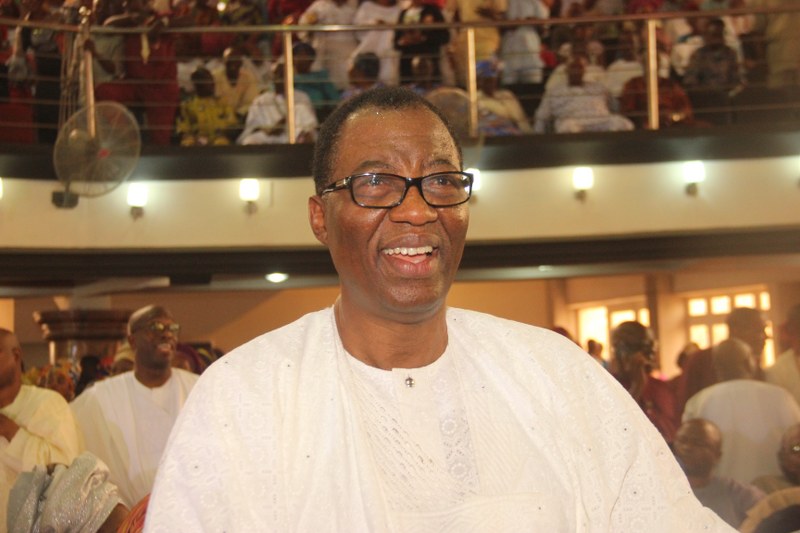 Former Ogun State Governor, Otunba Gbenga Daniel, was a two-term Governor of the State. He is the owner of Conference Hotel chain located in Ijebu-Ode & Sagamu,  and the newly opened outlet in Abeokuta. It has been the talk of town since the hotel began operations weeks back to welcome and celebrate guests and participants of Jac Motors, Abeokuta Marathon Race. Recall that the hotel was locked down for 8 years by the then Governor of the State, Senator Ibikunle Amosun, but Otunba Gbenga Daniel got back the full ownership of the hotel after series of court appearances before he got a judgement to return to site and commence operations. OGD, as he is fondly called, during a facility tour to Conference Hotel, Abeokuta, spoke on various issues bordering on his love for hospitality business, tackling unemployment among others. BUNMI MUSTAPHA of City People was  among the entourage.

You are an Engineer, a reputable one at that, but you are now investing in hospitality sector. There is Conference Hotel at Ijebu Ode, there is another one at Sagamu, while that of Abeokuta is just opening for business. Can you please tell us why you are venturing into the hospitality business?

Thank you very much. As you have rightly positioned, I am first of all an Engineer. I run a lift company and this is what I have done for about 30 years, so any other things you see me doing is an aberration, politics is an aberration and may be this one too. The hotel businesses are another form of aberration based on necessity.

And I will quickly go to the background. You will remember that when we came into Ogun State, we were developing sports because we felt that we needed to develop a few things, owing to a large number of the unemployed that we had. Apart from that, my credo as the governor was that government has no business in business, but government has the obligation to facilitate business. So, when I got to Ogun State as the goverrnor because of the large number of the unemployed, creating employment opportunities became our major priority. Most of what we did were pushed towards solving this problem. This was really our central thrust. Developing the sports sector, if you could remember led us to play host to the 2006 Gateway Games. Everybody agreed that that was the best national games festival ever before 2006 and I don’t think any other one held after it has been better. This opened our state to sports, and we cashed in on the opportunity to develop our stadia, the one in Ijebu Ode, that of Abeokuta was upgraded etc. I recall that sometimes in 2008 when Nigeria wanted to play host to the Junior World Cup, the Deputy President of FIFA then, Jack Warner, came to the country for inspection of sporting facilities and he said of all the stadia inspected across the country, that of Ijebu Ode excited them most, but there were no good hotel facilities that could encourage them to come and play those international matches in Ijebu Ode.

That was part one of the challenge, part two of the challenges was the poor management of some of our local hotels at that time. The then Gateway Hotel and we decided to concession them so that they could be properly managed, afterall, we have said goverrment has no business in business. We don’t want to spend the money meant for roads construction on all this again. Luckily, we concessioned Gateway Hotel in Ijebu Ode to a company partially owned by Ogun State government, Equity Insurance company.

Many people did not know this because during the recapitalisation of the insurance companies, Tower Gate insurance, which was then an Ogun State companies had merged with Equity Assurance. In fact, the Chairman was a nominee of the state government. So luckily, Equity bided for the Gateway Hotel in Ijebu Ode and won and that was how we killed two birds with one stone because while it would on its own look for money to put the hotel in good shape, government would still have control over it. But FIFA said all the rooms there were still not enough and then, suddenly, my friends started blackmailing me, saying while my businesses are in Lagos, Port Harcourt, Abuja I have been telling them to come and invest in the state and that I should lead by example. That was what made me an accidental hotelier. So, we started the experiment of the Conference Hotel in Ijebu Ode and luckily enough, it came out on time and during the second visit of Jack Warner in preparation for the hosting of the Junior World Cup, he said Ogun State had been considered as one of the places where to play the matches. To the glory of God, I think Argentina, Spain and America played in Ijebu Ode and that was how the idea started. The one in Sagamu was not planned to be a hotel, but an Old People home, which I personally wanted to donate to the community but it’s like our people are yet to buy into this idea of keeping our aged ones in a place as it is done abroad.

Our culture believes that it is like you are throwing your aged ones away when you take them somewhere, so, our people would rather want to stay with their aged ones and take good care of them. Though, our wives suffer for it, but then what can we do? So, after leaving office, we got busy with that too and got it done very well. The story of the one at Abeokuta, I don’t want to waste my time on it. What has happened has happened, forward ever, backward never. This was the credo of the late Chief Obafemi Awolowo, we thank God we are still very much alive, we are grateful to God that we survived whatever it was.

The most important thing, which was my own passion, was that while I was in part 2 or 200 level in the university, University of Lagos, UNILAG, to be precise, three companies came to interview me for jobs. The companies are: Shell, Chevron and UAC. In fact, a subsidiary of UAC gave me scholarship to complete my education and that was in addition to that of the Federal Government, so, I had two scholarships. As a 200 level student, I was already having three jobs waiting for me. That was the background of where I was coming from, so, when you now see graduates roaming the street, we all feel that as a people, we have failed. The only thing that excites me is to see our people engaged and that was why when we were in government we did not sack anybody. Rather, we doubled the strength of the civil service, the local government service and the teaching service. I was shocked to find out that the civil service did not have more than 5000 when I became the goverrnor. And 80% of whatever came in went into paying the civil servants. That was why Ogun was said to be a civil servants state because if anything should happened and the civil servants could not get paid at the end of the month, the economy collapse because there would be nothing to take to the market. So, part of the challenge then was how to diversify the economy and make sure the economy of the state did not only depend on the civil servants disposable income to survive. Part of what we looked at that time was tourism and that was why we developed Olumo Rock and all that believing that other people would be bringing in money. After our various efforts in the area of industrialisation, we employed additional 5000 into civil service, 17000 more into teaching and 7000 more into local government and by the time I left office the staff strength was still fewer than 100,000 and yet the institutions in the state alone produced an average of 100,000 per year, so in five years, we already had 500,000 unemployed. How can we now expect that our state, a civil servant state to accommodate them this. That was why we were begging our people to come and invest in the state we were even ready to give land free of charge. We just wanted our people engaged and the economy of the state to be buoyant. So, when the opportunity for this hotel came, we grabbed it and also did it well. I really don’t know if it is five-star as you have stated, but what I know is that whatever I do either in my public or private life I do it very well. It is part of OGD’s life, my house that I built over 26 years ago could still compete with any one in Lagos today. It is just my passion.

Are you not worried about over-concentration of hospitality businesses in this Oke Mosan axis?

There is nothing like that. I have been to other places outside the country and you will see all kinds of hotels lining the street be it in America, Hong Kong and Dubai. In fact in Dubai, 80% of the properties are for hospitality. It is important we have competition because if there is no competition, standard will dropped. It is through competition that we can raise standard in tourism and hospitality business and this will encourage people to come. It is not the money we are generating in this place that would turn round the economy. Look at Rwanda, where the Tutsi and Hutu were killing themselves some years back is now one of the fastest- growing economy in Africa. It is now the investment destination of choice because they have created enabling environment that can now make people to come and spend their money in the country. This is virtually what is driving the economy of the developed countries of the world. Some of us might have been to London to see Trafalgar Square and what is in Trafalgar Square, a fountain that I also want to believe the one here is far better. When you get there you started taking photographs and Britain has made so much money from it. Same thing for the House of torso and Buckingham palace where you go and watch the palace guards parade with their red caps. This is what we tried to do with Olumo Rock and we installed a lift there, to make it more attractive and inviting, people would come and, of course, pay money. That is how economy is developed. I am hoping that along this line, we could up the ante in Ogun State. We have New York and we have New Jersey, there is no reason we can’t take over from Lagos State. If we had gone by our Master plan, we would have overtaken Lagos with the plan for a refinery that is capable of employing over 20,000 people. Well, the dream has been killed, you people killed it and when it was being killed nobody talked, so let’s leave it as it is. (Laughter) I was happy about two weeks ago when I heard that wagon assembly plant was being flagged off in Kajola because it was already in our Master plan, go and check it. That is where we have our free trade zone for transportation in Ogun Central. All of this we have envisaged but when our people came and started dancing palongo.

Hon AKIN ALABI Is The New MOGAJI AJIWOGBO In IBADAN