How Late Chief ADEBOLA ASHIRU Was Buried In Style 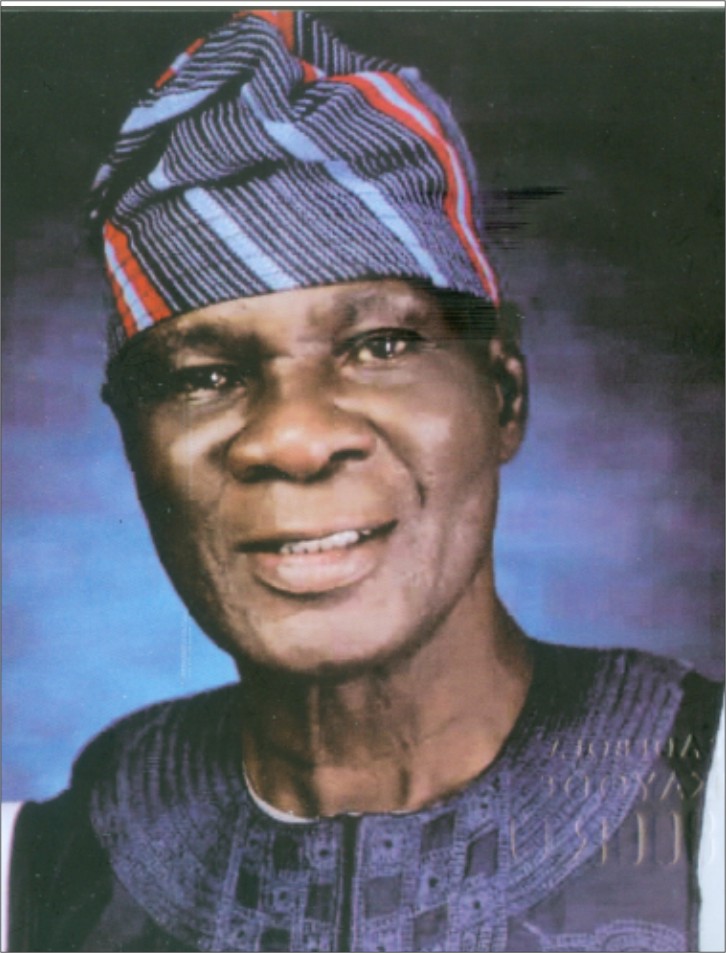 •Details Of The 3-Day Event

Chief Adebola Ashiru was a man of man parts. His spiritual, family, career and social life culminated into one thing: he was a man of immense influence. He’s had such a strong positive impact on every life he has met and touched. In his death, he remained influential still. At the age of 77 when he bowed out of life in style, his relevance never waned. This and many more reasons made his family, friends and loved ones give him a befitting burial.

It all started on Wednesday, July 28, 2021, at the Ascension Church of Anglican Communion, Lagos Diocese, Ikeja in Lagos while the grand finale held in Ijebu-Ode, his home town. From London to Lagos and finally Ijebu-Ode, it was the celebration of a life that was not just well spent but adjudged successful in every sense of it.

City People’s DAMILARE SALAMI 08155134152 and two Photojournalists, FEMI ADELEKE and ABDULRASHEED SANNI covered the three days event and in this report, they bring you a well-packaged gist of all that went down as well as beautiful memories from the event, enjoy.

Chief Adebola Ashiru was survived by his beautiful wife and the love of his life, to who he was married for 44 years until he breathe his last. Mrs Teresa Ifeanyi Ashiru couldn’t hold herself together seeing that her husband has left her lonely on a cold night. She had the support of all her children, Chukwugoziem and Ada Ibonye, Abayomi and Elizabeth Ashiru, Olaseni and Ogochukwu Ashiru, Charles and Omobola Ike, and Temidayo Ashiru. And her grandchildren as well, Oluwaseun Ashiru, Olaseni Reilly Ashiru, Solabomi Reilly-Ashiru, Zara Ibonye, Olaoluwayimika Ashiru, Zuri Ibonye, Oluwatosin Ashiru and Victoria and Beatrice Ike.

NIGHT OF PRAISE AND TRIBUTES HOLD IN LAGOS

There was an unexpectedly large turnout of people on Wednesday, July 28, 2021, at the popular Anglican Church of Ascension in Ikeja, Lagos, where dignitaries from all walks of life gathered to commensurate with the Ashiru clan of Ijebu Ode on the demise of their precious gem and the celebration of the legacies of the late Chief Adebola Ashiru.

THE PRAISE CHORAL BAND WAS PERFECT

Beautiful hymns oozed out the band on the night. Trust the Anglican Communion Choir or band to always produce a superb hymnal service. The Praise Chapral Band was up to the task. It delivered both classical and contemporary music with a high level of professionalism and skill. Just the way chief Ashiru would have enjoyed it in his lifetime; everyone who gathered to pay tributes to this fine gentleman enjoyed the music as well as every other part of the programme.

Chief Adebola Ashiru has no doubt touched many groups and individuals. This was what made many groups and individuals mark their presence by paying tributes to the late icon. The groups included his old schoolmate, his London association, workmates, Ijebu-Ode Grammar School (JOGS), the Ashoru Clan Queens, the people of Adekunle Village, family, friends and many others.

Until he left public service as a 2-time Commissioner in Ogun State, Otunba Bimbola Ashiru was always in the news. For the duration of his stay as a Commissioner under Senator Ibikunle Amosun in Ogun State, he was the star Commissioner. This is because his Ministry was the star ministry that recorded a lot of remarkable achievements. He is also a popular Ijebu Politician, who is from a popular Ashiru family in Ijebu-Ode. He was born in Ijebu-Ode to the illustrious Ashiru family. His father, late Pa Simeon Adeyemi Ashiru, was a distinguished Ijebu statesman while his mother ‘Omo’ba (Princess) Moradeun Ashiru, is from the Fidipote royal family of Ijebu Ode and the ruling house of Owu-Ijebu. He is well-read, graduating with a degree in Marketing, Purchasing & Supply, and a Masters’ Degree in Strategic Management. He spoke excellently about his late brother and revealed how Chief Adebola Ashiru taught him about fashion. “Many people think I’m a fashionista but I learnt all about fashion from my late brother. Although he was my brother, I am his first child. He took me into his house at a very young age and I am very grateful for the man I have become today because of him,” he said.

Distinguished Metallurgical Engineer and entrepreneur with over 35 years of professional experience that spans through the academia, oil, gas, refining, petrochemical industries, financial institutions and other sectors in Nigeria, UK, USA, and Saudi Arabia. Prof Oluwatoyin Ashiru is an experienced Boardroom Executive who is serving in top capacities for organisations in diverse fields. Current Group Managing Director/ CEO of Tricontinental Group; Non-Executive Director of FCMB Group Plc; Chairman, CSL Stockbrokers Ltd; Chairman, Crestmont Ltd – premium technologies organization. He and his wife just like his other siblings were actively involved in all the activities penned down during Chief Bola Ashiru’s burial.

Professor Oladapo Adenrele Ashiru is the CEO of the newly established Institute of Reproductive Medicine in Lagos Nigeria. He is one of the world’s most eminent specialists in the field of fertility treatment. He is recognized for his pioneering work in Mechanisms controlling ovulation, Clinical Embryology, IVF and Pre-Implantation Genetic Testing (PGT) as well as the Management of Reproductive toxicants through Modern Mayr Medicine. His skills as Reproductive Endocrinologist spanned over a 40 years period in various parts if the world. Prof Ashiru attended the College of Medicine, University of Lagos, (1969 – 1974), graduating with distinction in Anatomy. His postgraduate training took place at the University of Nebraska Medical Center in Omaha (1977-1979).

He revealed so much about his late brother and explained how much he is going to be missed. “Chief Bola Ashiru no matter how old doesn’t deserve to die because of his kindness and the kind of person he is. But we in the medical profession know that death is the end of all pains. So as much as we love him to be around, we are happy that he has gone home to rest eternally. Chief Bola Ashiru didn’t die, he only transited into glory,” he concluded.

The Simeon Adeyemi Ashiru Anglican Church, SIMAAAC hosted the Christian wake service for Chief Adebola Ashiru. Ministers of God in Ijebu, the Anglican church choir and the entire Anglican Communion in Ogun State joined the SIMAAAC members and the Ashiru family to celebrate the homecoming of the departed general. The day started on Thursday morning as the remains of Pa Ashiru departed the Lagos University Teaching Hospital LASUTH and ended with a celebration galore at his hometown.

TOS Funeral Homes is one of the topmost funeral service providers in Nigeria. It is a privately-owned and family-run Funeral business, established almost two decades ago by Mrs. Taiwo Ogunsola, to address the need for world-class mortuary facilities and funeral services in Nigeria. It aims to improve the standards of Government-run mortuaries and shed light on the Nigerian Funeral Industry.

If its service delivery at Chief Ashiru’s burial is a yardstick for performance, then this outfit definitely deserves some commendation. All through the burial down to the internment, TOS Funeral Homes gave efficient and satisfactory delivery; such that there was no form of complaint or grudges. Let’s quickly tell you that its undertakers are great dancers too. They danced so well that they enjoyed some cash spray from the family of the deceased and friends.

The cool music from the saxophone of veteran musician, Deola Olota brought the heavens down at the Christ Church, Porogun Ijebu Anglican Diocese on Friday, July 30th, 2021 during the funeral service of the late Chief Adebola Ashiru. He came alongside his band as the guest choir and their performances were topnotch. They ended the service with a melodious hallelujah chorus orchestra. Demola Olota’s special performance was one of the talking points at this event.

The remains of Chief Adebola Ashiru visited the Christ Church, Porogun Ijebu for the last time before it was finally committed to the mother earth. The church brigade paid its last respect amid trumpets, match past and salutations. Members of his immediate family were there to witness this honour as well.

Nigeria’s current minister of state for health, Senator Olorunibe Mamora and his beloved wife were in attendance at the event. It is a known fact that Senator Mamora is a close friend of the Ashirus and he stood by them even at this difficult moment. He was caught on camera exchanging pleasantries with the wife of the deceased and children too.

It is a known fact that it is against the Yoruba tradition for any royal father to attend a funeral no matter how highly placed the deceased was. But then, The Ajalaye of Ijebu, Ajalorun of Ijebu and Oba of Ososa all sent their staff of office and royal representatives to condole with the grieving Ashiru family.

The Bishop Ayo Awosoga received a touch of class with a very beautiful while and royal blue decoration when guests began to troop in for the reception party of this one-in-a-million event. The fully secured edifice took into cognizance the ravaging covid-19 pandemic and therefore, ensured that anyone who gained access has its facemask properly worn and well sanitised with the required hand sanitiser.

THE DYNAMIC CREW SUPPLIED THE MUSIC

Is there an owambe without good music? The answer is no. the band known as the Dynamic Crew was headed by a fine gentleman and saxophonist, Toluwalope Iyiola. The band serenaded to the pleasure of everyone at the event. Pa Ashiru’s children came one after the other to spray and receive cash gifts. It was indeed a glorious ending for the late elder statesman.

Let’s also tell you that there was plenty of food to eat and more than enough drinks that would easily go round twice for the teeming crowd at the reception party. The service providers at the event included Kaffi Catering Services, Sollizy Ventures, MMIX Division Drinks and S.N Teens Catering Services.

Meet Some Real Estate Players We Hardly Talk About