How Late Mrs KUDIRAT ATINUKE Aka Bashorun Was Buried 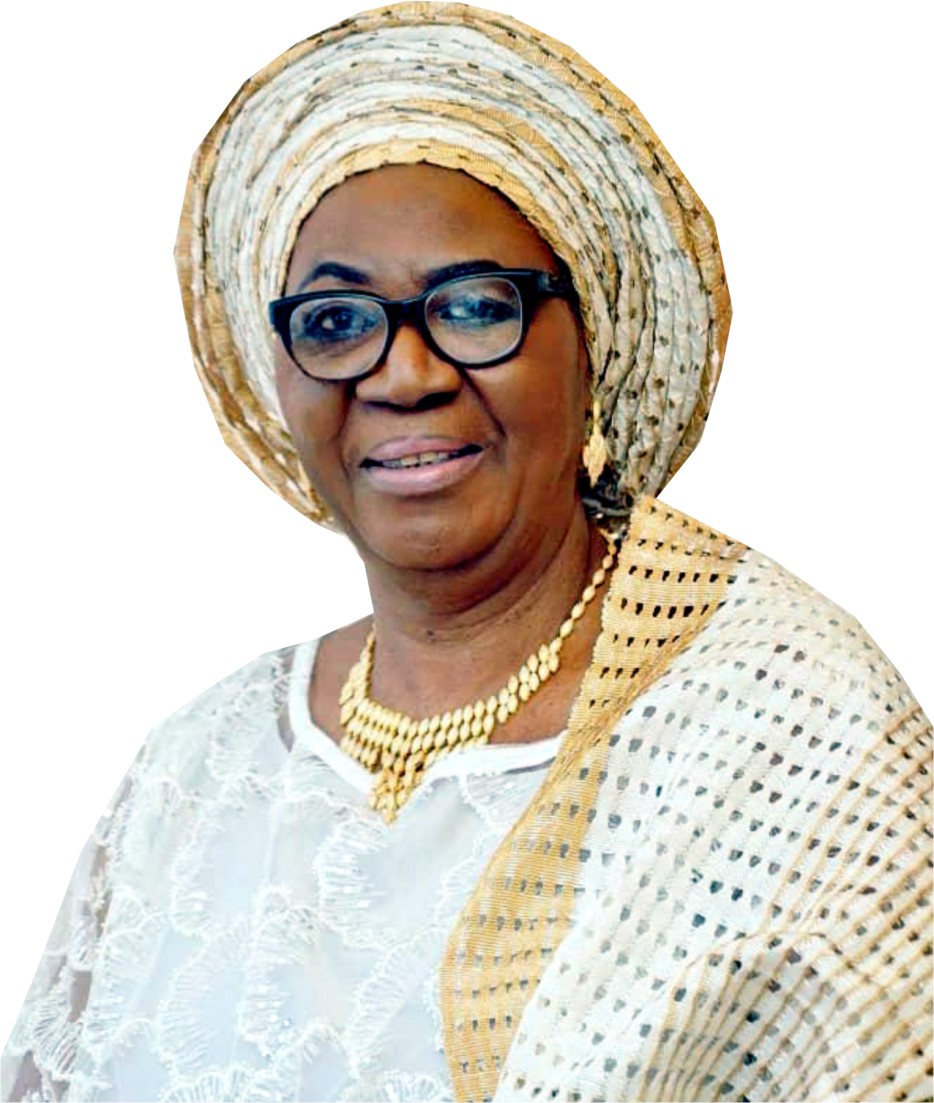 •Details Of The Classy Burial Ceremony

The Gbagada and Victoria Island areas of Lagos were completely shut down of Friday, October 22, 2021, as the remains of the wife of the late President of the Nigerian Bar Association, Mrs Kudirat Atinuke Aka-Bashorun was committed to the mother earth. Amidst tears, glitz and glamour. The beautiful mother and grandmother was also regarded by all as beautiful inside and out.

Call it a state burial and you may not be so wrong because all the crème-de-la-crème on the Lagos social scene were either present or fully represented. Starting with the Jagaban Borgu of Lagos, Asiwaju Bola Ahmed Tinubu, down to the Minister of and Housing, H/E Mr Babatunde Raji Fashola, the incumbent governor of Lagos State, H/E Mr Babajide Sanwo-Olu, the Nigerian Bar Association and many other top dignitaries were among those that sent their condolences to the Aka-Bashorun and Fujah families in Lagos.

City People’s Brands Editor, DAMILARE SALAMI (08155134152) alongside Senior Photojournalist, Abdulrasheed Sanni were present at the event and here are some of the hot gists many eyes didn’t catch. Below is the report.

Despite all the COVID-19 protocols that the families had put in place, people still showed love for the late madam Kudirat Aka-Bashorun. So many people left their jobs to be with her children and family while others flew in from overseas to pay their last respect to the departed beautiful soul. Virtually everyone had something positive to say about the deceased not because it was out of respect for her or a norm but simply because she had touched their lives at one point in her encounter with them.

Mama’s Gbagada home became a mini-pilgrimage as people trooped in, to celebrate a well-spent life. On Thursday, October 21, 20021, accolades poured from friends, family, loved ones and members of the Redeemed Christian Church of God (RCCG) at large and particularly, the Christ’s Church parish where Mama worshipped until she answered the call of her creator.

The late Mrs Kudirat Atinuke Aka-Bashorun, a widow of former President of the Nigeria Bar Association, Alao Aka- Bashorun, was until her death, a mother and grandmother with so much impact on her immediate and extended family.

In 1979 when the local government administration was created, Mrs Aka-Bashorun pioneered women participation and representation at that level when she was elected as the first councillor and the only woman then, under the Unity Party of Nigeria, UPN. She represented Surulere Local Government, one of the 8 LGAs that were created. Her administration ensured the commencement and completion of the Local Government Secretariat that is still in use today. She was also a part of the innermost circle of the presidential campaign team of the late MKO Abiola tagged HOPE ’93.

In the last 20 years of her life, she surrendered her all to Christ and served God faithfully. She also became a member of the Revelation 3:20 evangelism group where she had the opportunity to reach out to lost souls for the advancement of the kingdom of God.

It was emotional but then, all the members of RCCG Christ’s Church, Gbagada took solace in the fact that they would meet mama Aka-Bashorun again at the feet of Christ. The burial service took place at the church auditorium in Gbagada and the venue was nearly filled to the brim with members and guests in attendance.

The RCCG Christ’s Church choir was not just stunning with their yellow and purple outfits, they were equally superb with their ministrations. They brought life to the church, starting from the praise worship segment to hymns and other ministrations.

Hardly would anyone in attendance not talk about the fashion style rocked by all the beautiful babes and women in attendance at the church and reception simply because the multi-colour Ankara Aso-Ebi took the centre stage. There were different shades and styles but they all made the occasion very gorgeous, classy and well lit.

Lots of celebrity men and women slay the aso-ebi so much that the minority few that didn’t come in the required Ankara would definitely feel left out. That was how big the aso-ebi made the event look.

It must be noted that Ebony Funeral did wonders. They are one of the wave-making funeral experts in town. They made sure everything was in order. Trust their undertakers; they surely know how to impress with their charismatic and energetic display. But beyond doing well, they must also be praised for the way they danced. That really sold them out. The deceased children and family sprayed them so well that it felt like they were the band that was hired to sing at the reception.

It was a teary moment for all at the ebony vaults and gardens where the late madam Kudirat Aka-Bashorun’s remains was committed to mother earth. Everyone became emotional and some let their tears flow freely. Mama’s children and grandchildren all wept because they are obviously going to miss her love, care and important advice.

The venue of the reception party was the Balmoral Hall inside the Federal Palace Hotel in Victoria Island, Lagos. It was completely transformed with decorations and the images of Mrs Aka-Bashorun conspicuously displayed everywhere. The red carpet was also star-studded. Name the celebrity man or woman on the social scene in Lagos and we will tell you that they were spotted at the event.

The Faith Music Band is one of the hottest, wave-making celebrity live bands in our society today. The band’s founder’s humility, focus and discipline stand them out, so does the bands customized signature attire and style with trendsetting sparkling white clothes matched with abetiaja caps. Their innovation re-defined fashion for celebrity live band musicians on stage.

For those who usually attend Lagos parties, they must have one way or the other met on occasion members who are usually dressed in white, prim and proper, well-organized, time-conscious, and clearly focused band. Fast-forward to Mama Aka-Bashorun’s burial reception party, the Faith Music Band gave their very best shot and it was more than good enough. Everyone present at the event attested to the fact that this band knows its onions and delivers optimally when duty calls.

The Oluwo of Iwoland Oba AbdulRasheed Adewale Akanbi, no doubt, is one of the most talked-about kings in Yorubaland. The reason is simple, he is an ever-present face on the social scene and this has placed Iwo on the world map permanently.

“I am a king who has come to restore the old glory of our traditional institution and restore Obaship back to our esteemed position. We must clean up our Culture and Tradition, he had said and this is what he is doing with his fashion style and statement whenever he appears at parties. It wasn’t different at the late Madam Kudirat Aka-Bashorun’s burial party. The Oluwo came early enough and he occupied the royal seat that had already been prepared for him. He also became one of the talking points at the event as he made statements with his royal traditional attire.

ELESE OF ILESE IJEBU TOO

HRH Oba Oluremi Owolabi Obayomi, the Elese of Ilese Ijebu is a member of the Bobakeye age group in Ijebu land. He is the son of Pa Emmanuel Odutayo Obayomi, who was a community and church leader and also a politician of the defunct Action Group and the Unity Party of Nigeria (UPN). That was where he was linked to the late Madam Aka-Bashorun and he deemed it fit to pay his last respect at her burial reception party. He was among the top celebrities that graced the occasion, came early and also made a statement with their presence and style

Talk about a compere that is young, eloquent, jovial and tush and you would have simply described Ayodele Okundalaiye popularly known as SACO. This young dude would make you laugh without stress and he doesn’t even look funny! He was the compere at this huge event and he did well to carry both the old and young generation along. SACO was the ideal plug for the party. His expertise came to the fore when there was a need for proper time management on stage and he did that so professionally. He can be reached on Instagram via @spiritofsaco.

THE AARE OF LAGOS, CHIEF RASAQ OKOYA AND WIFE STUN

The Aare of Lagos Chief Rasaq Akanni Okoya and his ever-beautiful wife, Chief Mrs Sade Okoya both made a glamorous entry to the event. Starting from the main entrance, they had traditionally pulled the crowd to themselves. Many had thought that it was another royal father that graced the day until they got to the space at the VIP reserved table. Trust the Okoyas to deliver when it comes to spraying the celebrants on the dance floor, that’s where they do the talking. They took the game to another level where only the eagles can soar.

The Lagos king of boys, MC Oluomo made it to the event too. He came with his entourage, spent ample time and also registered his presence on stage with Morayo Afolabi Brown and family. He was spotted taking pictures with other celebrities like CSP Dolapo Badmos, Queen Salawa Abeni, Foluke Daramola and a host of others.

THE TVC CREW TOOK OVER

The TVC “Your View” presenters and crew members were there for one of them, Morayo Afolabi Brown. They had time to dance and thank God because it was exactly a year ago that TVC was attacked by those who hijacked the #EndSars Protest in 2020.

“Your View” is Television Continental’s morning chat-fest with a repeat broadcast late at night. It features a team of seven dynamic young women of different ages, experiences and backgrounds, discussing the most exciting events of the day. These seven ladies with varying views about life: Morayo Afolabi Brown, Yeni Kuti, Osayuwamen Peace-Saleh, Olajumoke Olubunmi Olaode-James, Tope Mark Odigie, Nyma Akashat Zibiri and Sandra Eze, have become regular fixtures in the lives of television watchers every day on TVC Lagos, with the show currently rated the third most-watched show on television. Anchored by Morayo Brown, the ladies entertain and educate viewers, debating anything and everything – from family issues politics, health, and business to show biz – in an easily digestible, down-to-earth manner.

READ ALSO: WHY T.B JOSHUA’S SYNAGOGUE CHURCH HAS BEEN CLOSED FOR MONTHS

Why T.B JOSHUA’s SYNAGOGUE Church Has Been Closed For Months