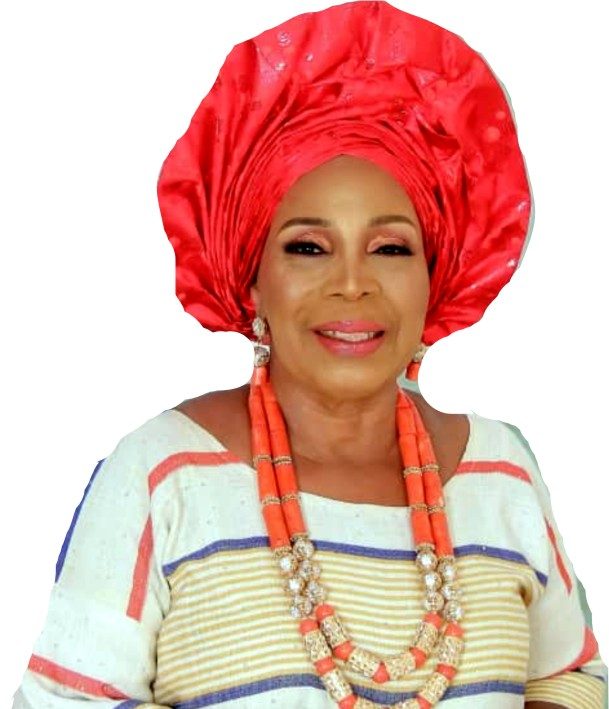 It was a big deal for Madam Mojisola Odegbami to hang around her family, friends and loved ones on Saturday, February 12, 2022, as she marked her 70th birthday in style.

The Peter Akinolu Foundation (PAF) complex located in Obada, Abeokuta, Ogun State hosted top dignitaries, members of her church, as well as the members of her residential community who came to felicitate with the new septuagenarian on her big day.

Madam Mojisola Odegbami is a woman of many faces. She is a mother and grandmother, a life teacher, life coach, benefactor to many and to cap it all, a woman with a golden heart.

Many people at the event described her as fearless, undaunting and a woman who holds life very simply. Moji, as she is fondly called by her former schoolmates, the 1968 set of the Badagry Grammar School (BGS) was full of life as she received several commendations from her family, former schoolmates, community leaders, as well as her neighbours who came to felicitate with her.

City People’s Brands Editor, DAMILARE SALAMI (08155134152) and Photojournalist, Sunday Oyemade were in Abeokuta to cover the event and here are excerpts from all that went down there. Enjoy.

Madam Mojisola Ogunsina-Odegbami is a popular society woman in the Obada area of Abeokuta, Ogun State. Popularly known as Mama O Ni Gba, Madam Moji Odegbami was married to the popular Odegbami family but before then, she had been through a lot in life. She struggled earlier on in life because she came from a very poor background but at 70, it is all history. She had completely forgotten about her sorrow because God has been gracious to her. She is now a mother and grandmother who has seen both sides of life.

MOJ, as her friends and former schoolmates from the Badagry Grammar School (BGS) would call her, is a woman with the heart and strength of a man. While talking about her at the party, some of them revealed that you’ll never have any dull moment around Moji Odegbami. You will never find her around girls because of the kind of strength she has. She had been helpful to many in the past, she is still very helpful to men right now, her neighbours also noted.

Let’s quickly inform you that two royal fathers and many high chiefs were among the special dignitaries that stormed the PAF Complex that hosted the event. They came to felicitate with Madam Odegbami as a proud daughter of their community.

HRM, Oba Afolabi Sowunmi, the Olu Ibogun of Ibogun Sowunmi was identified at the event, he came with his beautiful Olori. Also spotted was HRM, Oba Afolabi Solaja, the Olu of Obada community in Abeokuta, Ogun State. During his speech, Oba Solaja revealed that Madam Odegbami had been a mother of the community, she has been serving as a solid backbone to many less-privileged and young families. Also spotted at the event was Chief Abiodun Akinjole, the Baale of Akinjole community, High-Chief Oguntoyinbo and High-Chief (Mrs) Olusola Oguntoyinbo were also spotted at the event.

He is a popular voice on Faaji Fm and he has proven over time that there is no dull moment whenever he anchors an event. Babatunde Awobena who anchored the event brought his experience as a compere, comedian and radio host to the fore. He was a perfect fit for the job because he understood the audience clearly and gave them a show of their life. It was fun and there was no dull moment from the beginning till the very end.

Femi Famous is a fast-rising juju singer who is doing so well in his chosen career. He is popularly known as the Fazzar Funky Juju crooner and he is doing so well for himself and the band. Femi thrilled from the beginning of the show till it was very dark at night. His performance forced the royalties at the event to shake their bodies. He is such a powerful singer and entertainer. Let’s quickly tell you that this Fazzar Funky Juju creator is a great dancer too. He can be easily compared to great dancers and entertainers like King Sunny Ade (KSA) and Sir Shina Peters, (SSP).

GRANDMA OPENS UP ON HER LIFE AT 70

During her thanksgiving service, Madam Mojisola revealed the many battles she had fought and many victories she had won through the help of her Lord Jesus Christ.

“I came from a very poor family. I am one of seven children, 5 girls and 2 boys. My parents never had anything but we were always happy, my father struggled to send us to school. Out of the 7 children, I am very proud to say that I am the only one that has a master’s degree.

“After I travelled to the United States, it was still very rough. With my Master’s degree, I was still cleaning butts and doing other menial jobs but I was resilient about it and that helped me a lot. With the proceeds I made from those jobs, I was able to send my children to school and make a convenient living for myself too. After my retirement back in 2016, I had served the American Government for 35 years, I am back in Nigeria financially okay. Now I can relax and enjoy my retirement benefits. The social security I get over there is more than enough for me to fend for myself and those around me, that was the turnaround for me. Even while I was here in Nigeria, I never relented,” she said.

It was a gift galore for the birthday girl. So many people amongst her guests came with different gifts for the celebrant. However, the most outstanding gift on the day was a gigantic pencil art frame presented by the 1968 set of the Badagry Grammar School (BGS Old Students).

Present to present the gift was the President of BGS, Mr Funso Ogunsina who had a lot to say about the celebrant. He revealed how they used to read together and cause trouble together during their secondary school days. He was the first to describe Madam Mojisola Odegbami as being fearless. “Moji was always hanging around boys in those days and whenever we are afraid to do anything, you will find her taking the lead role. She is not afraid of anything or anyone” was part of his comments about the celebrant.

Popular former Green Eagles star and winner of Nigeria’s first African Cup of Nations (AFCON) trophy, Chief Segun Odegbami (OON) was also among the top dignitaries that graced the party. When City People asked what the relationship between him and the celebrant was, the mathematical Segun Odegbami revealed that the celebrant was the wife of his cousin and that he was there to show support and solidarity for the celebrant. He was seen around the celebrant, playing such a hugely supportive role.

There was plenty of food to eat and drink, all thanks to the Aunty Megg Catering brand that handled the meal. Led by the indefatigable Omotayo Ladejoh, the waiters and waitresses ensured that all the guests were served without bias. Famos Small Chops also didn’t leave any table unattended. They served all the guests with small chops and other finger foods.

Did you know that Madam Mojisola Odegbami looked as young as ever even at 70? Her gele was tied by Yomi Gele. A brand that is very popular in Lagos. Abayomi Adeyemi, the CEO can be reached on his Instagram handle via @yomi_gele.

READ ALSO: SEE THE MANY FACTORS THAT WILL WORK FOR TINUBU

Why We Are Introducing The Adopt-A-Bin Initiative In Lagos- LAWMA MD, Ibrahim Odumboni