How MC OLUOMO Gave Me The Nickname KOKO ZARIA 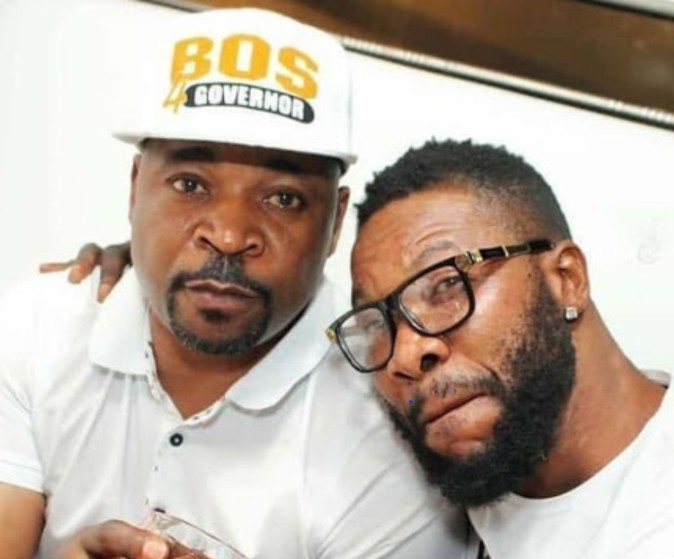 +Why They Also Call Me ZARGARZA & American Boy

Lagos NURTW Big Boys, Koko Zaria and M.C Oluomo are very close. If you go online to check their Facebook and Instagram pages you will see the photos of the 2 NURTW big boys all over. Koko Zaria whose real name is Alhaji Ganiyu Ayinde Oyedepo, never fails to let people know that M.C. Oluomo is his boss (Oga).

Recently, City People interviewed Koko Zaria at his new Lagos Hotel where he revealed how close they are. He also revealed that it was M.C Oluomo who gave him the nickname Koko Zaria. Read on.

Can you tell us how you and M.C Oluomo became very close?

Many people always ask me that question. They always want to know. How and Why we are close. Let me tell you that I am close to M.C Oluomo because he is a nice man. If you are close to him, you will always be happy. He will always make sure you are happy. I know him well. I understand him. He is not selfish. He doesn’t want the next person to go hungry. Usually, people don’t like the next person to be as big as they are. That is not M.C Oluomo’s style. He is different. Most bosses don’t like those below them to rise up to them. No. That is where he is different. Since we started, he told him from day one, that Ayinde. Look, every height I reach, I will take you along with me. He is always taking me along with him. If he is going to America, he will also ask me to come along. When I tell him I am not buoyant enough to buy ticket. He will pay for my ticket. He will buy me ticket. Up till today, as we speak, he still gives me money. He still dashes me money. Whenever I tell him ‘Oga’ I don’t have money he will give me. He always wants his boys to be happy.

Before I completed my hotel, he was always asking me: how far with your hotel project? Have you not finished the hotel project? I will then explain to him what is happening to me that I am broke. He has taken me to so many places to meet big people to ask them for money for me to finish my hotel project.

Many don’t know that he is different from many of us. As you see him, M.C Oluomo does not drink. He does not smoke. He does not also smoke Indian Hemp. How many NURTW people can say that of MC, I won’t lie. I smoke ooo! If not for the fact that he is an NURTW boss he should be an Alfa. Many people don’t know M.C. Oluomo. Whenever I am abroad like in the U.S. and people talk about M.C Oluomo, I usually laugh when I hear what they say about him. They don’t know him. We know him better. Atimes when you see him help people, we would say Laba Oluomo! This is too much. He will say to us don’t worry. It is that generousity, helping of people that got him to where he is today. Oluomo atimes will be broke and the little he has he will still give out.

He has been the one making me take life easy. Everybody knows me. Me, I don’t take nonesense from people. But for Oluomo only God knows where I would have been now because people know me as a no nonosense. But for the constant advice I get from Oluomo, I may have been in prison. He is a patient person. I am not patient. People say I am tough. People say I get angry easily. People say I am a no nonesense person. It is because I don’t suffer fools gladly. I hate insult. I don’t like people insulting me. But Oluomo will always tell me to calm down.

He used to say there are some insults you tolerate to make you succeed in life. He tells me about patience. He always tells me to be patient. When I look back in life and I see what happened to all those who didn’t listen to me, some who have died or fallen by the way side, I appreciate him more.

When I wake up in the morning everyday after praying to God for letting me see another day, I pray to God also to guide and protect M.C. Oluomo, for God to make him continue to live longer. He should live longer. Many of us in NURTW don’t appreciate M.C. Oluomo. You can see that since he became the NURTW boss in Lagos, there has been no fight. Everything has been gentle. He has taken charge and restore normalcy. All those bad boys are no longer around. He has driven them out. It is either you shape in or shape out. He called all of them to a meeting and told them to drop all those thuggery attitudes. That is how he engaged all of them. He has kept them busy.

He constantly empowers them whether you are APC or PDP, regardless of your party. But the rule is: don’t fight. I like him. Anytime I see him I feel happy. He is a solid guy.

When he sees me laughing and smiling, he would say you are always happy, don’t you feel sad. I used to joke with him that I can only be sad when he is sad.

How did you get your nickname Koko Zaria?

I have lived in Zaria before. In Zaria there are several streets like Lagos Street, Benin Street, Yoruba Street. I used to go to Zaria a lot then. When things get tough I usually run to Zaria.

I was learning at a place in Oshodi. The first job I learnt in my life is Turner.

I was into selling Readymade at Oluwole. I went to one school at Aroloya in Lagos. I started off from Lagos. Then I went to train as Mechanic, then I went to learn to be a Turner, we use to turn engines. When there is work to do they will call us by our alias. In our shop there are so many called Ayinde, so, they gave us other names. Hey! You this boy that goes to Zaria. That was how they started calling me Ayinde Zaria.

The Koko Zaria name came out of the blow I used to give those I fight with. When I give them blow, it will leave Koko on their head. When I box them, Koko will come out. That was how they added Koko to my name, to make it Koko Zaria.

Zagarza was given to me by Tayo Sindodo. Then, I used to like to dress up like one guy in America. That was how they gave me Zagarza . I then decided to use it for my hotel. I have done the Zagarza movie. The name Zaria is because I had lived in Zaria. Many don’t know that Oluomo gave me my alias Koko Zaria.

How did you get the nickname American Boy?

I have driven so many cars. I drove Opel, white colour. I love white since I was a kid. My grandmother made me like white. Some people when they see me in white, they will say I did ritual with white. Can you imagine?

People say a lot rubbish about me. People talk of Ogun Owo. Don’t mind them. I bought the Opel then and I changed the colour to white. I used to put one American handkerchief around my head or on the dash board of my car. When people see me they will say this guy must be Omo America. Yet, I had never visited America. So they have been calling me American Boy and I never went there.

So the 1st day I went to the American Embassy, I told them I can’t speak English. The English woman who interviewed me, began to ask me questions in English, I told her I didn’t understand English!

She now said why do I want to travel, I told her I want to go there to see what is there. She started laughing and gave me a Visa. So, for years and decades, people have been calling me American Boy, before I now finally visited. People should give themselves alias that work for them. My own American Boy has worked for me.