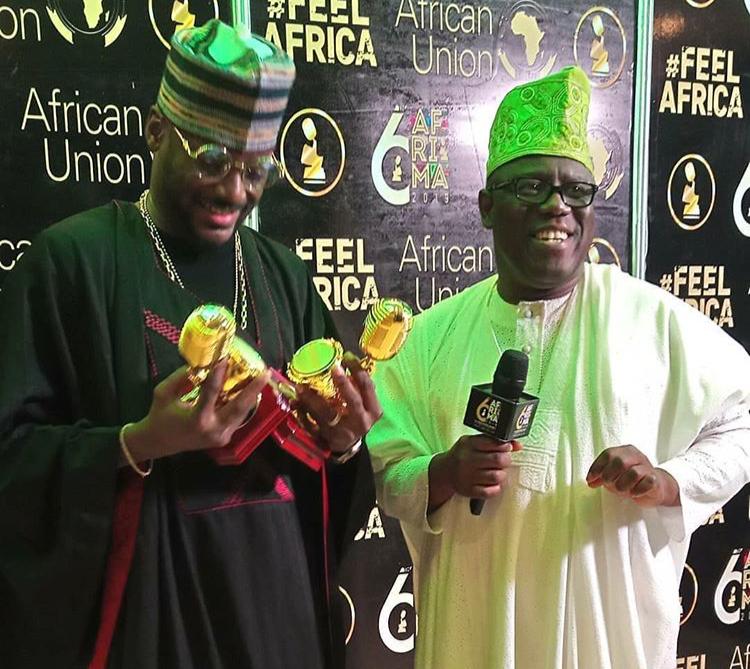 The All Africa Music Awards (also referred to as AFRIMA) is an annual awards event. The awards event was established by the International Committee AFRIMA, in collaboration with the African Union (AU) to reward and celebrate musical works, talents and creativity around the African continent while promoting the African cultural heritage. Its pioneer awards show was held in first in 2014. This year’s edition was held on the 23rd of November at the Eko convention center with different celebrities in and out of Lagos in attendance. The event started by 9:31 pm with young talented dancers who stormed the stage with some slaying in black while others did white on black and the boys on vintage shirts. The show was full of glitz and glamour as music superstars stormed the ceremony to watch how their hard work over the past one year would be rewarded. Lots of African music artistes were nominated and served their victories. However, the highlights for Nigerian music enthusiasts in the ceremony were the moments of victory for their Nigerian representatives. Burna Boy, Wizkid, Tiwa Savage all bagged awards West African Male Artiste of The Year, Song of The Year and West African Female Artiste of The Year. 2face Idibia also won an award for the Best African Act for the contemporary category.

The crowd at AFRIMA

The crowd at the 6th AFRIMA was one of a kind, different people around Africa were all in attendance, this is an event that had half of Lagos in attendance. Most people had to stay outside as there was no space to sit even at the VI axis, the event was no doubt very interesting.

Skibii performed immediately after the dancers. Let’s say he opened the event with an amazing performance, singing his hit songs from datz how stars do to sensima. Do you know that immediately Skibii stepped on stage, a girl in the crowd screamed her lungs out, the amazing part was the fact that she is not a Nigerian. His performance got the crowd in love with his songs.

The dancers stormed the stage

The dancers steps on stage immediately after Skibii performance dressed in African artiya dancing to Bode Thomas a South African song, as they danced to the vibe, other dancers stepped in with carnival costumes made with different colors. Their performance on stage got many people talking.

The host of the 6th AFRIMA

Pearl Thusi and Eddie Kadi was the host for the day. Their collaboration and energy was just too hot, they look too good together as they were making fun out of everything, especially about all the dance in Africa, they both graced the event, the was no minute of a dull soul at the event, even though they are both not Nigerians they both put everything in place just to make their guests happy and not too bored.

The African fans favourite went to Mohammed Ramadan, Revelation of African continent went to  Nikky as she thanked God for receiving an award at 17, this young girl is good looking with a super sweet voice, she went home with two awards and performed after she received her second.

Another hot artiste with no chills on the night was Salatie. he stepped on stage to perform his hit songs as most of the guests didn’t know him but at the time he opened up and started singing and his dancers came out dressed in Ankara the crowd was all screaming as his voice was one of a kind.

Stoneboy stepped into the building and was rushed from the red carpet by the media men for interviews, he didn’t reject any interview, he stayed on the red carpet for over an hour as he was trying to sort all the media outfits, he was called to perform after about 30 minutes that he got to the green room.

Mike Dada spoke on AFRIMA, how he started and how big the brand has grown to be, he thanked all the sponsors, especially the chairman of Ecobank for being his partner from day one and also thanked MTN, Coca-Cola saying they are the best people.

Aminux is an R‘n’B singer all the way from Morocco to Nigeria to thrill fans, his performance was mouthwatering as many didn’t know that his voice is as fine as his looks. The guests from Morocco were all proud to have their artiste been celebrated.

2baba is a 20-year a king, you can call him 2Baba or 2face, you can call also him a legend as he is all in one. 2Baba’s award was presented to him before he got to Eko Hotel but was received on his behalf. Many he was going to get only one award, he was later announced as the winner of another category, as he jumped on stage. He thanked all his fans and family and also apologized for coming late.

CDQ who was currently in the news for trying to whine Bam Bam and her fans attacked him. The indigenous rapper gave his best at the 6th AFRIMA and his energy was one that couldn’t be compared to anything as he thrilled his fans with so much joy on his face.

Awilo Logomba is a Congolese musician who was a drummer in Viva la Musica, Stukas, Nouvelle Generation and Loketo. In 1995, he finally quit drumming for singing and released his first album Moto Pamba with help from Shimita, Ballou Canta, Dindo Yogo, Dally Kimoko, Sam Mangwana, Syran Mbenza and Rigo Star. The album that shot him to the limelight, he won an award and also had an amazing performance at the 6th edition of Afrima. His fans were all very surprised to see him on stage all the way from London.

Sadiq Onifade, known professionally as Wurld, is a Nigerian-American singer and songwriter. Born in Lagos, Nigeria, Wurld who relocated to Atlanta, Georgia to pursue secondary education and a career in music. He described his style of music as electro-fusion. He released his debut EP Evolution in 2013. Wurld happens to be one of the most sought after artiste in Nigeria, even though he is not based in naija, his style of music is accepted by all. Before his performance, he was sighted going up and down the backstage as he was trying to put himself together before going on stage. He finally got on stage and killed the crowd, immediately he stepped on stage it felt like the stage woke up from sleep as they screamed and looked all happy.

Teni the entertainer was here too

Teni is not just called the entertainer. She makes things happen on stage, no performance beat hers, she did what she is best known for. The guest from old to young could communicate with her sound. She performed all her hit songs to her fans, the song that got all the crowd dancing was case, billionaire and Uyo Meyo.

These three won super big at the award, the award night was one that had half of Lagos in attendance. Though they were all not present but were celebrated by all, there was more than one event on the 23rd of November as many of the celebrities still tried to push themselves to attend the award night. Burna Boy, Wizkid, Tiwa Savage all bagged awards West African Male Artiste of The Year, Song of The Year and West African Female Artiste of The Year. 2face Idibia also won an award for Best African Act for the Contemporary category.

The recognitions at the 6th AFRIMA

In the 36 categories of the awards ceremony, which comprise the continental and regional categories. The continental category rewards African artistes in various music genres and forms, while the regional category celebrates the outstanding achievements of African artistes within their specific region of origin. Also, the 6th AFRIMA legendary awards were announced; a recognition of individuals who have impacted the world positively, using their craft in the music, arts and culture industry which went to Awilo and 2Baba.