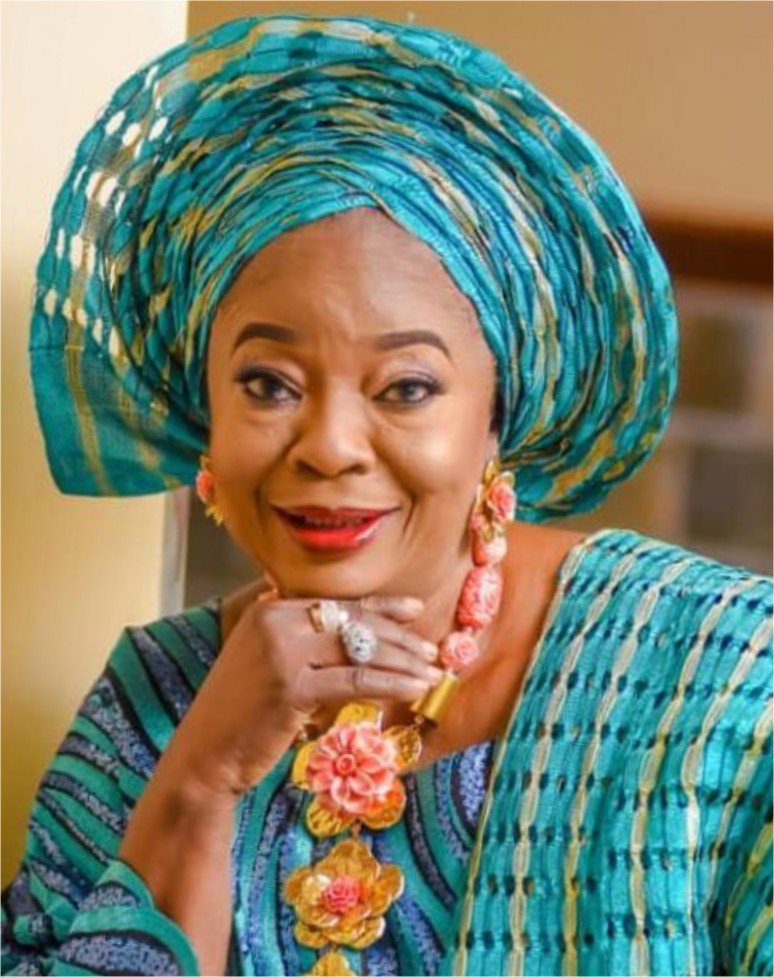 •The Intimate Story Of The OGUN Popular Businesswoman

Chief Mrs Oluwayemisi Segilola Alogi is one of the top business women in Abeokuta, who ventured  into business over 30 years ago. And the business is still growing bigger and bigger. Although, she might not be in the news all the time, because she is an exremely private person. But for those who are real estate developers and those who deal with building materials, Yemisi Alogi is not new to them, as she has spread her paint business empire Yalog Paints to other states in the Southwest, like Oyo, Osun, Ekiti and Ondo. The popular Alogi bus stop at Obantoko area of Abeokuta was named after the family.

Last week, the Oke Ona and Egba high chief celebrated her 70th birthday and the event which was helped at the Marquee of Olusegun Obasanjo Presidential Library, Abeouta, had Chief Evangelist Ebenezer Obey on the band stand. So lovely and classy was the party that it  is still the talk of the town days after.

Let us tell you about Chief Oluwayemisi Segilola Akanke Alogi, who was born on the 16th of December, 1950 at Igbehin, Abeokuta, to the family of late Mr James Soyinka Oladipo and Chief Mrs Racheal Oluwemimo. She is indeed a true daughter of Egbaland. Her late father hailed from the Ayikondu family of the popular Lika Aje dynasty of Isale Igbhin, Abeokuta, while her mother hailed from the Ogundipe Alatise family of Ikija township, Oke Ona, Egba Abeokuta.

She started her primary education at St. John’s Primary School Igbehin, Abeokuta. She joined her dad in Lagos in 1960 and was enrolled at Odo Abore Primary School, Mushin, Lagos, where she completed her primary education. She was not encouraged to go further and had to return to Abeokuta where her mom veered her into business activities. At that time, her mom was renowned G.B Ollivant dish merchant at the Itoku market and was popularly known as Iya Alawo. She joined her mom in Dish merchandising business and also when her mom later ventured into sales of provisions and PZ products. Thus it can be rightly said that it was from her mom she learnt and imbibed the essential rudiments of business.

In February 1968, she was married to Chief Emmanuel Okikiola Sojobi Alogi, who hails from Kemta Oke Jigbo, Abeokuta. Chief Sojobi Alogi, early in his life business veered into carpentry and was a specialist in wood carving. In those days there were no machines for carving woods, it was done by hand and Chief Sojobi Alogi so much mastered this art of wood carving that his fellow carpenters usually brought their wood to him to be carved.  Soon his carpenter colleagues and neighbors started addressing him as Alogi. This nickname stuck till date, to the extent that very few people knew that the real family surname is Sojobi, and that Alogi is merely a business name.

In some sense, Alogi has come to be adopted as alternative surname for households from the clan of chief Emmanuel Okikiolu, many now use the compound surname Sojobi Alogi.

Chief Emmanuel Sojobi Alogi’s elder sister, Chief Mrs Modupe Tagoe played a significant role in getting young Yemisi married to Emmanuel, her brother. It was her that spotted Yemisi, did necessary enquires about Yemisi, and she later discussed the marriage idea with Yemisi’s parents who gave their consent. As was mostly practiced in those days, young Yemisi had no say in the choice of husband for her, in fact, she was not brought into the picture until the very last moment, when arrangements were being made for marriage ceremony. One of the things Yemisi will always remember her late father for was his determination in ensuring that he gave her a befitting wedding ceremony, including engaging the service of the late Sakara exponent, Yusuf Olatunji, who was on the bandstand. In those days only the real affluent engaged the service of Yusuf Olatunji. Yemisi’s dad was not in the category but he still did that for Yemisi, maybe as a sort of compensation for having not really encouraged her to further her studies.

At the time Yemisi got married to Chief Emmanuel Alogi, the husband had left the carpentry trade and was already well grounded in building materials and block manufacturing business. He encouraged Yemisi to also veer into the building materials business, he then enrolled her for apprenticeship. On completion in 1972, she secured small shop where she started with sale of nails, locks and keys. In 1974, she secured a relatively bigger shop at Ijemo Agbadu Road, Ago Oko area of Abeokuta, which she still maintains till date even though she now has her permanent corporate office within that vicinity.

Sometime in 1978, someone walked into her shop and brought her a business proposal of the sales and distributorship of car paints and painting accessories. Within a very short time she had become also well known in this line of business. Hitherto, motor vehicle painters in Abeokuta had to travel to Lagos of Ibadan to buy car paints and other painting accessories. She became the main distributor for car paints manufacturers for Abeokuta and its environs. The paints include Sikkens, Permobel, Sikaflex, Mayer and 3m. She was also selling accessories like spraying gums, thinners, masking tapes, glues, to mention a few. This further enlarged her coast and business horizon, she started with the sales and distributorship of African paints products, later those of Berger Paints, and later those of Premier Paints, Apex Paints and Peggy Chemical Industry, Lagos.

Though a civilized woman with modest education and exposure. Chief Mrs Yemisi Alogi had a very little idea on how paints were produced. Hers was to serve as a distribution channel for major paints manufacturers and she seemed contended with this. This changed in 1996 when she was introduced to house paints production. Initially she felt highly reluctant but after persistent persuasions, encouragement and enlightenment, she accepted to venture into house paints production. Work actually started in 1997 and for good three years she was at the drawing board, doing necessary home work. Within this period she acquired a vast land for the paints factory, assembled a seasoned team of factory workers and arranged adequate training for some key staff, including herself. She also got the company registered with the corporate affairs commission, Abuja.

With the support of her bankers, between 1999 and 2001, she was able to build the paints factory and purchase modern paints production machines and other necessary equipment. The first production amid great fanfare, it was done in 2001, and within a short time, Yalog Paints started competing favorably with other well known established paints. The paints company will be twenty years in 2021. Sometimes Chief Mrs Yemisi Alogi cannot believe what has become of her Yalog Paints. May people have asked her how she has been managing to stay afloat on a business terrain dominated by men, some of whom have even closed shop. She has always attributed her business success to God’s blessing upon the business.

Though she has her own paints company and no longer serves as distributor for others. She will entirely be grateful to those paints manufacturers whom she diligently served for eighteen years, particularly Chief Gbenga Akinowo, an Ondo High Chief and Founder of African Paints and Chief Ogo Oluwa Bankole, Olootu of Owu Kingdom and founder of Premier Paints. She still maintains very good working relationship with them and other paints manufacturers.

Chief Mrs Alogi is no doubts one of the very few female industrialists domiciled in Egbaland through her company Yalogs Paints has been contributing to the economic development of Ogun State, Nigeria and Egbaland in particular. She is an employer of labor. She is also involved in many philanthropic gestures. It was in recognition of all these that the Osile of Oke Ona Egba, Oba Dr Adedapo Tejuoso, conferred on her in February 1993, the title of Iyalate Oke Ona Egba, as the foremost female entrepreneur. She is the first recipient of that title. Later in 1997, she accepted the title of Otun Iyalode Onigbagbo Igbhin, which was conferred on her for her contributions to the propagation of the gospel, particularly at Igbehin land. She is also the Iyalate of Owu kingdom, Iyaloja of Oke Ona Egba.