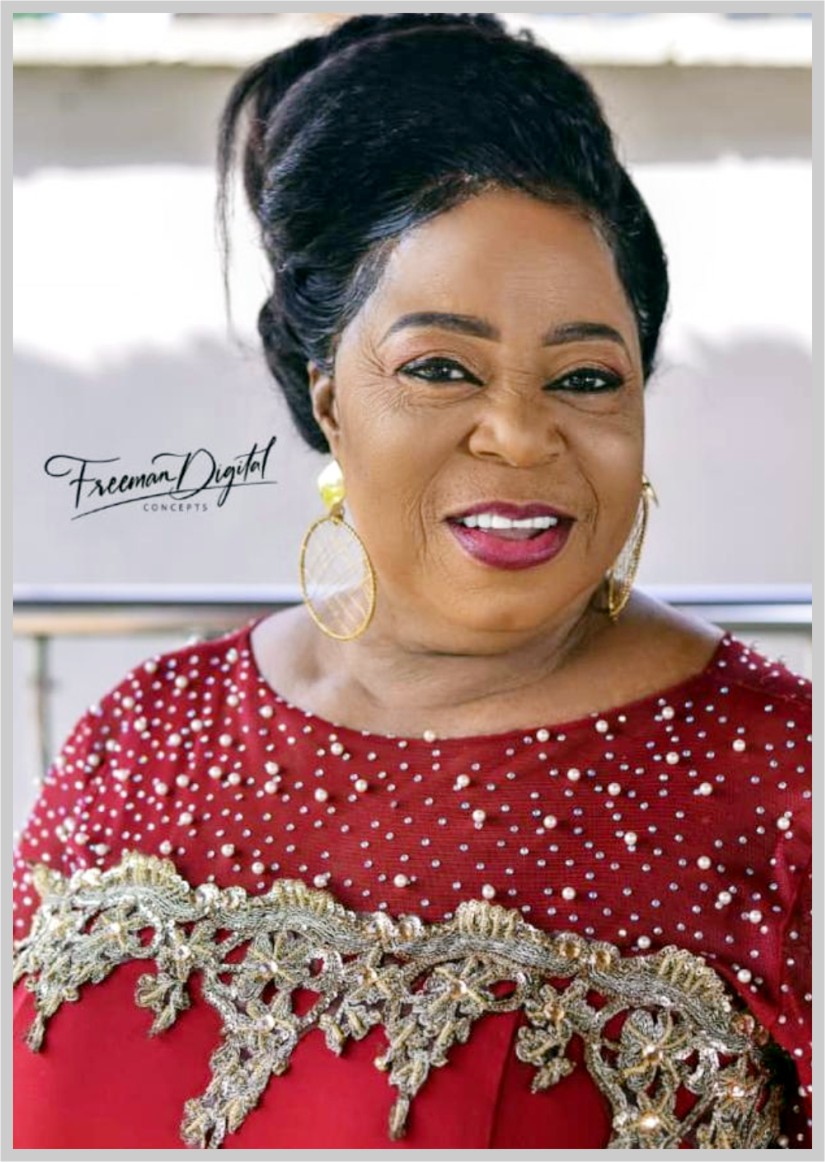 •Talks About 35 Yrs In Civil Service

Yeye Afolashade Kokumo is a popular socialite and celebrity woman in Ogun state.

She was a Civil Servant for 35 years before she retired few weeks ago. She joined the civil service with the post of Information Officer. But she rose to different posts before she retired as the Permanent Secretary, Ogun State Bureau of Local Government and Pensioners, a retirement she celebrated flamboyantly with her new chieftaincy tittle as Otun Iyalode of Egba Oke Ona, a chieftaincy that was bestwoned on her by Oba Dr. Adedapo Tejuosho, the Osile of Oke Ona Egba.

The 2 in one event was held at The Marquee, Olusegun Obasanjo Presidential Library, Abeokuta, with Yinka Ayefele on the band stand.

Yeye Afolashade is married to AIG Johnson Babatunde Kokumo, they have been married for more than twenty years now and the power couple always show affection and love to each other no matter where they are.

Yeye as she is fondly called has worked in all the three senatorial districts in Ogun state, before she was appointed permanent secretary in 2016.

In this Interview with BUNMI MUSTAPHA, Yeye shared her journey into civil service, her growing up years and many more.

Congratulations on your retirement from the civil service after 35 years. How does this makes you feel?

Firstly, I feel so thankful to God almighty for being my pillar all this while during my thirty five years of service, for making me leave the service without any blemish, I feel so fulfilled, I feel so excited, as I look forward to start a new phase.

Thirty five years ago when you joined the service, what prompt you into it and how did it all started?

Was there politics played in civil service too?

Politics the way I understand it, then the rules were very clear, not like now when you are a civil servant and can still carry a party card, it was not the same then, civil servants are meant to be apolitical, we actually normally crack jokes that we belong to AGIP, meaning any government in power, we are not meant to be a partisan, and that is how it should be, when I was given the letter of appointment, in fact at the interview room, a question was put across to me, I was made to understand that I could be posted to any part of the state, and the person that said that to me said, would I be ready to serve in any party of the state, and I said yes, so I knew what was ahead of me and I was prepared, so I was ready to take up any letter of posting without lobbying, I never lobbied for any posting, because I love meeting new people, I love breaking new grounds, I am adventurous in nature, and everything just played out fine for me.

Of all the local government you have been posted to over the years, which of them would you say you miss most and you will choose to work there all over again?

That’s a difficult one, because in each local government that I have worked, it was a different experience each, I would not say I had a favorite local government, because I made my mark in all the local government I have worked, like I said I started with Odede, and by the time I was leaving, I left with mixed feelings, yes I was ready to move to a new place, but been a integral part of the people there, both the workers, the indigene, and it was all tears when I left, by the time I moved to my next local government, which was Abeokuta north, it was like this is the best place, I was like why didn’t I come here before, but by the time I left Abeokuta North again for Ado Odo Ota, which was not under Ogun central, I even became more popular there, and everywhere I went, I made my mark, and I was always been send forth with tears, I always made heaven out of any hellish situation I found myself.

Is there anything you wish you would have done differently during your service years?

Differently, given the opportunity, there is this thing between civil servants, am talking of professionals, the admin people, the refer to us as professionals, we that are not in the admin, and there was a lot of struggle, lots of intrigues, we didn’t find it easy, and I just want to say without any fear of favor, that it is a very wrong thing to do, nobody goes to the university to study administrate like that, when you get into the system, you learn, and at a stage, we do nothing except admin job, so being an engineer, a medical doctor, a communication art person, a mass communication graduate does not make you a lesser being than someone in the admin, I would rather rephrased that question as something that should be looked into in the service,

I am out of the service now, but I would want a situation, where everyone is seen equally, in actual fact some of these people who claimed to be in the admin and always want to use power over others now were not as good as some of us, some of them were retards in school, but because they find their way into the admin department, they feel and call themselves almighty admin, and very soon that is going to change, because in Ogun State now, I am very very happy that the present head of service is a professional, Alhaja Salmot Otun, she started as a community development officer, the one before her Town Planner Chukwu he is a professional, and the one before him, Eng. Bisiriyu, also a professional, so we are already there, I just hope more and more professionals will remain permanent secretaries, and will show who they are and prove their vessels and be placed in right positions.

Can you share with us, your background and growing up years?

I am a product of grace and I am always happy to say that, first and foremost, I was born in Ajegunle, in Lagos, they call it jungle city, I call it Aj city, I grew up in a family of five, I am the last born of the family, our home then is always full of activities, until I lost my mom in 1975, then I was still in secondary school, and my mom was like the rallying point, and the music just stopped when she died, at the once home that was full of activities, suddenly became as quite as a grave yard, before she died, we had fun, very lively, lots of relation lived with us, in actual fact, it was after her death that I realized that we were not even related with so many people that lived with us, we also had extended families with us, we had it going on fine, my mom was a stalk illiterate, but she was someone who will do anything to make her children happy, and we lived happily until that happened, and unfortunately my dad died a few years after too, and then life became very tough, quite unfortunately,

My siblings were not on their own yet, so no one could help anyone, we had to fend for ourselves, I did so many menial jobs, and I was determined to go to school, so after my secondary school, I worked with Nigerian port authority for more than year before I went to the polytechnic Ibadan, and while there, there was this arrangement then at the ministry of establishment, the old office in Abeokuta, Ogun State indigenes who were students will come there and they would give you vacation jobs, I worked at the licensing office then, I was always a regular customer, and that’s how I managed through my tertiary school education.

Would you say where you were born and the things you went through made you the stronger woman you are today?

Yes I would say, but more importantly, I grew up to know that my mom was very independent, and as little as I was then she always tells me to be independent, like I said she was a stalk illiterate, but she knew life, and it was as if she knew she was not going to live long, she kept drumming it into my hears, that being a woman, you have to be very strong, you have to be up and doing, she told me I didn’t have to wait for a man, even though most of what she was saying then didn’t make sense to me, because I didn’t know why she was saying all those things,

I was too young for the things I was hearing, but when she died, I started reflecting, and then I got the grip of what she was saying, and there is no way you would be born in Ajegunle and you would not be strong and wise, I am very strict wise, I was born in Ajegunle so you don’t expect me to be an aje butter, although there are some aje butters in Ajegunle then, I had friends then, the Okugbeni’s, the Diasu’s, the way they were treated at home, you would wonder why they came to live in Ajegunle, I have been strong from the cradle, and when I lost my parents, naturally I became stronger, and I kept praying to God, I wanted that life, I love that life when everyone was around, there was laughter, we all take delight in eating together, I wanted that life so badly back, that I kept on praying to God that I want to be successful in life, and God answered my prayers, and so far, I have not been disappointed.