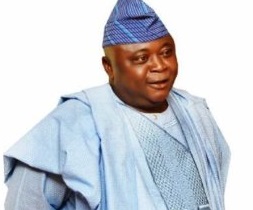 •Talks About His Life @ 55
Penultimate weekend, Hon. Ladi Adebutu, the son of an Ijebu billionaire, Chief Kessington Adebutu, turned 55 years. It was a double celebration for this grassroots politician, who was honoured with a title of “Fewagboye of Owode Yewa”, a day before his birthday.
This chairman of House Committee on Agriculture and rural development is not just loved in his home town, Iperu Remo, Hon. Ladi Adebutu is also loved in all nooks and crannies of Ogun State. When he clocked 55, the chairman of Ogun PDP, Hon. Sikirulai Ogundele, threw a classy birthday to mark the event at his mansion located at Hiltop Estate in Abeakuta. City People’s Assistant Society Editor, Abiola Orisile, who was at the event had an exclusive interview with him. He speaks on his life at 55, why he is contesting Ogun Guber election and what life has taught him.

I Am The Best Candidate For OGUN Governorship – Hon. LADI ADEBUTU Opens Up On His Bid was last modified: March 6th, 2017 by Seye Kehinde