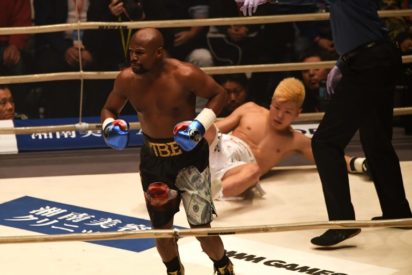 Japanese kickboxer Tenshin Nasukawa says he “underestimated” Floyd Mayweather but that he had “concerns” before his defeat in an exhibition boxing match on Monday.

Floyd Mayweather beat Japanese kickboxing phenomenon Tenshin Nasukawa by a technical knock-out in the first round of a New Year’s Eve “exhibition” bout that brought the US boxing superstar out of retirement.

Nasukawa, 20, was knocked down three times and ended the fight in tears.

The days since the fight was confirmed have been enjoyable but with concerns,” Nasukawa said. He wrote on Instagram: “I am disappointed at myself since I thought I could have done better. “But I will face the facts and will continue to take on any challenge.

I learned that I didn’t work hard enough to earn this opportunity, and I will use this defeat to improve myself and move forward this year.” Mayweather had a 4kg (9lb) weight advantage for the contest, which was worth a reported $9m and was widely criticised. Both fighters are undefeated in their respective sports, and the defeat will not count towards Nasukawa’s record.

He said he has “no regrets” over agreeing to the fight. “When I first got the offer I took it in a flash,” said Nasukawa, who also competes in mixed martial arts (MMA). “I thought this was an opportunity of a lifetime, and although there were significant differences in accomplishments and weight classes.

I felt that I must not run and take on the challenge. “Despite all the things that happened leading up to the fight, I came to realise how truly great Mayweather was. “I was the one underestimating him. I promise to make it to that level.”