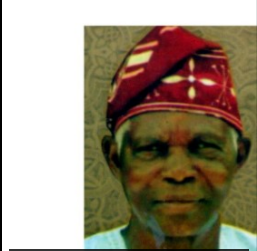 They had a service at St. John’s Anglican Church, Ijoku, Sagamu and reception followed at Akarigbo Palace Hall, Sagamu. It was a colourful event.

Olotu Aruna Adegbuyi Akinwunmi has a rich history. He was born to Alhaji Anofi Akinwunmi Ogunsola and Madam Osenotu Efubade Akinwunmi Ogunsola (nee Chief Onawole Likosi Orukotan) of blessed memories, both indigenes of Sagamu, on the 10th of August 1932. He spent his first eight years (1932-1940)

with his maternal grand-father, Chief Onowole Likosi at Okeariko, doing arable farming. He attended St. Paul’s (Anglican) Primary School, Alagbo, Sagamu (1941-1948). He worked for two years as a clerk (1949-1950) to enable him save money to begin Secondary Education. He attended Eko Boys High School (1951-1955) where he passed the West African School Certificate Examination (WASC). He worked briefly with the Federal Medical Stores, Oshodi, Lagos (1956). Because of his interest in teaching, he was admitted to Government Teachers, Training College, Ibadan where he was trained to become a grade two teacher.

He worked as a pupil teacher at Awe High School, Awe, Oyo for five years (1959-1963) during the period, he served as the game master/house master respectively. Owing to his passion for sports, he resigned from teaching and got employed at Lagos Sport Council, as a sports organiser of Athletics, Table Tennis, Lawn Tennis, Boxing, Wrestling, Volley ball, Basket ball and Football. Because of his devotion and dedication to duty he was awarded a scholarship to study organisation and administration of sport and Local Government in West Germany between 1969 and 1974. He had his training first in German language at Gothe Institute in Passau and his preliminary training in sport at Hessen State Sport School Frankfurt/M. Understanding the German language and sport organisation and administration he gained admission to University of Mainz/R to study sport management leading to award of Dutch Diploma. When he came back, he continued his service with Lagos Sport Council and was promoted to post of Senior Sport organiser, During the period, he served as the Sport Administrator with the Sports Council and Secretary to Lagos State Football Association, which he co-founded. He took organised football to the four Divisions of the State: Lagos Island/Mainland, Ikorodu, Epe, and Badagry where he he set up Divisional Football Associations and appointed full-time sport officers. He became the founder of the 1st volley ball sport otherwise known as Pioneer Volley Club, which later became the pioneer volley ball association in the State. He was chosen as one of the official delegates to the Olympics/Games and World Cup (1972/1974) in Western Germany where he served the contingent to interpret German to English language. He also served as the Secretary of catering committee of the all African Games, Lagos (1973).

His ambition to make his wide knowledge of sport organisation and administration of maxically benefit Lagos State in particular and Nigeria in general was aborted when the military took over government and retired public servants including him in 1976.

Within two weeks after his retirement, he got an employment at a Departmental company, where he served as a Supermarket Manager (1976-1978). After serving meritoriously in both public and private sectors without attaining maximum satisfaction, he decided to’ be on his own to become set employed. He formed and registered two companies namely: Gamuewa Nigeria Co and Adsolak Trading Co. By the grace of God and hard-work, he was able to achieve within ten years what he could not in twenty years of service to other establishments.

He first came in contact with his wife,  Princess Olushola Akinwunmi, at a sports meeting in a school in Oyo, where she was the game mistress. It was the occasion of the school inter-house sports meeting. She showed that she had ability for organising and catering, the way she entertained guests. He developed interest in her perceiving that she would be a caring woman. “We dated for about two years and got married in April 1962. Our parents agreed  and blessed the union. The marriage was successful, with male and female children, and grand children who are doing well in their various careers and we are proud of them. To God be the glory!”

Although, he was born into an Islamic family his education (schooling) in Christian environment and his knowledge of the Bible, however, made him to  convert to a born-again Christian. He was baptised at St. Paul’s Cathedral Sagamu in May, 1957 and was confirmed by the Bishop at St. John Anqtican Church, Ijoku, Sagamu in May 1987. He is a member of Young Men’s Christian Association (YMCA) and became the President of Sagamu YMCA (1996-2002) he was elected President of Ogun State YMCA and served for eleven years (2003-2014) He was elected Chairman of Hostel Committee of National Council of YMCA. He is currently a member of Board of Trustees (BOT) of both Ogun State YMCA and National Council of YMCA. He served as a co-auditor of St. John  Anglican Church, Ijoku. He is a human-rights activist and was chairperson of Amnesty International (AI) Nigerian Unit for fifteen years (1972-1987).

During the period, he travelled to several Countties including England, West Germany, France, Finland e.t.c. to fight for the rights and freedom of Prisoners of Coincidence (POC). He participated briefly in grassroots politics and became Chairman of the Ikeja Local Government Division of Alliance for Democracy (1999-2007). He was a member of the Lagos State Executive Committee of Democratic People Alliance (DPA) (2007-2012) and held the post of the Publicity/Organising Committee of the Association during the period. He is a passionate member of Sagamu Pace-setter Organisation.

Princess (Mrs.) Victoria Eyitomilayo Olusola Akinwunmi was born on the 18th day of June, 1938, into the royal family of Lasunwon Ikorodu Town in Lagos State. Her parents lived in Ibadan for many years before her father was installed the Oba  of Ikorodu in 1952. Her father was the late Oba S.O. Ladega, the Ayangburen of Ikorodu from 1952 to 1970. Her mother was Oloori C.M. Ladega of blessed  memory who hailed from Ilesha.

She attended St. James Primary School, Ogunpa, Ibadan after her Primary Education. She proceeded to St. Theresas College Oke Ado, Ibadan. She later attended United Missionary College, Oke Ado, Ibadan for Teacher’s Gr II certificate. She passed out as a qualified teacher in 1959 and was posted to United Secondary Modern School in Oyo in 1960 and other schools in Oyo for many years. She got married to her husband, Olotu Adegbuyi Akinwunmi in 1962.

“Our merciful, Living, Promissing and fulfilling God blessed the marriage with wonderful children. Praise the Lord”. She improved on her educational qualification by attending the College of Education (Now College of Education, Ijaniki) then in Surulere where she obtained Associateship Certificate in Science Education. She was a teacher under Lagos State Ministry of Education and rose to the position of the head teacher. She was head teacher of Mount Carmel Convent School, Ebute Meta, Ransome Kuti Primary School, Idi-Oro, Olusosun Primary School and Oregun Primary School from where she retired honourably in 1990. After retirement, she established a Creche and Nursery School (Adsolak Day Care and Nursery School) which was operated for many years.

She also tried her hands on trading. Her grocery shop served her community until she quit a few years after her 70th birthday. She also distributed products for Food specialties Nigeria makers of Maggi and others. She enjoyed travelling overseas with her husband and enjoys farming which she still supervises till now.

FROM THEIR DAUGHTER, TITI FABAMWO & FAMILY

“Our dear parents, Grandparents and Great grandparents. We are blessed to have you. Your worth is PRICELESS. You are the BEST. Grandpa. Our quiet Grandpa. You are very patient (a great virtue) You don’t talk much, but we feel your love for us. You are our dearly loved parents on all tiers. Your intelligence cannot be overemphasized. Education is the legacy not compromised. You amaze always even at 86, you stand straight, you do not read with spectacles. You still take your walks to keep fit. Your conviction on family ties is strong. It must remain at all costs. Your slogan is ‘O kun ebi o ni ti owo mi ja’ You pray for us always. Your unquestionably intact memory attests to it and so is that of your beautiful wife. Dearest Grandma. No words can describe the depth of your value. Honestly, there can be only you as you, THE BEST EVER in everything. Your prayer day and night, your care on all fronts e.g the food items from your farm) Gari, Lafun, Water Yam, Fresh Vegetables and even starch for our clothes) the pure Adiagbon for the grand and great-grandchildren till date. An educator per excellence. Even at age 80, you are still on top of it. Your record keeping and accountability are second to none. You ensured and you are still ensuring that we get the best in everything. You were our home tutor and the base of our education hence excellent results. Your resilience and determination to find us all on solid footing are ever fresh in our minds, and you have not stopped. The focus is now more on the Grands and Greats, how awesome dear mother in Israel and a virtuous woman.

“We can continue dear parents but time and space curtail. You are both rare breeds and undeniably, our mentors. 56 years of marriage and you are still going strong. In-laws as parents. Aren’t we blessed? Firmly, we confess that we are offspring of a BLESSED HERITAGE, and PROUDLY we tell the whole world that we shall be glad to come same way if there is ever a chance to that choice You are still touching lives and making an impact on humanity. Well done. We love you dearly. Our hearts pour out in pride and gratitude to God for your lifestyles. Thank you Lord for our parents. We are most grateful for your kindness to our family. We acknowledge your grace upon us and we affirm that your praises shall continually be in our mouths. We ask for mercy and that by your special grace our parents shall live much longer in good health and sound minds. They shall be privileged to see their descendants to the fourth generations and even beyond with all of us around their table joyously. They will continue to enjoy the fruits of their labour. Their lives of honesty, integrity, contentment, fairness, discipline, absolute trust and obedience in you shall be legacies found germinating and flourishing in their descendants and that it shall be well with their household now and forever Amen.

READ ALSO: I HAVE BEEN WORKING BEHIND THE CAMERAS FOR 23 YRS – POPULAR FILMMAKER, LANCELOT IMASUEN