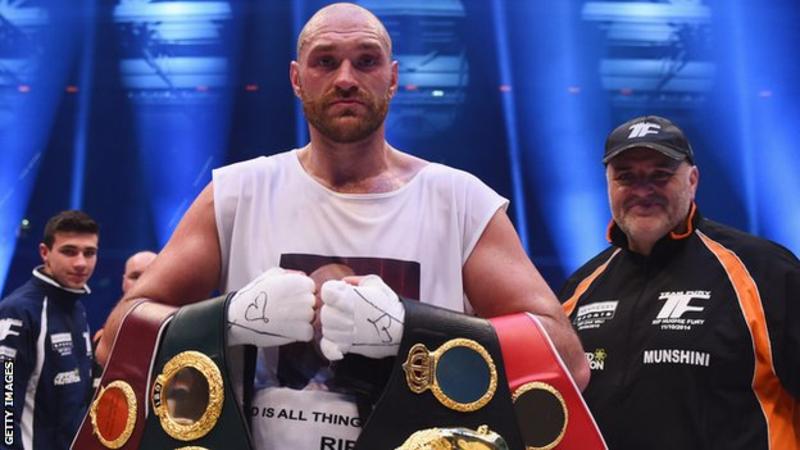 Banned boxing heavyweight champion Tyson Fury has declared himself innocent and demanded a resolution to his doping suspension.

Fury made this call in an attempt to end a nearly two-year absence from the ring.

The 29-year-old has not fought since flawing Wladimir Klitschko in November 2015 and cannot return until a UK Anti-Doping hearing into his ban takes place.

Ukad postponed the hearing in May, shattering Fury’s hopes of a July bout, and is yet to announce another date.

“How long must I be held up and kept out of action?” Fury wrote on Twitter.

“Clear my name and let me return to my former glory. I’m innocent, set me free!”

Ukad, which charged Fury with a doping offence in June 2016, refused to comment on his ongoing case, adding there is no timescale for its investigation.

The British Boxing Board of Control said at the time of the postponed hearing in May that Fury’s licence was suspended “pending further investigation by Ukad into anti-doping and medical issues”.

He will have to appear before the board to request permission to be allowed to fight again – but it cannot rule on his case until Ukad completes his hearing.

Promoter Frank Warren retweeted Fury’s plea but said when the Ukad hearing was postponed that he feared it may not be held until October.

Fury’s full tweet read: “How long must I be held up and kept out of action? It’s been 15 months since I’ve been under investigation, you’re keeping an innocent man from fulfilling his destiny and from providing for his family.

“Everybody else is dealt with in a few months, why must I be treated any differently?

“Surely there must be a human rights law preventing this from happening to people!

“Either ban me or set me free as I’ve been in limbo for a long time! I want to move on with my life!

“Clear my name and let me return to my former glory.”

During his absence from the sport, Fury has twice claimed he has retired before then deciding to carry on boxing.

His cousin Hughie is due to challenge undefeated New Zealander Joseph Parker for the WBO heavyweight title on 23 September at the Manchester Arena.