Islamic State days are numbered – US 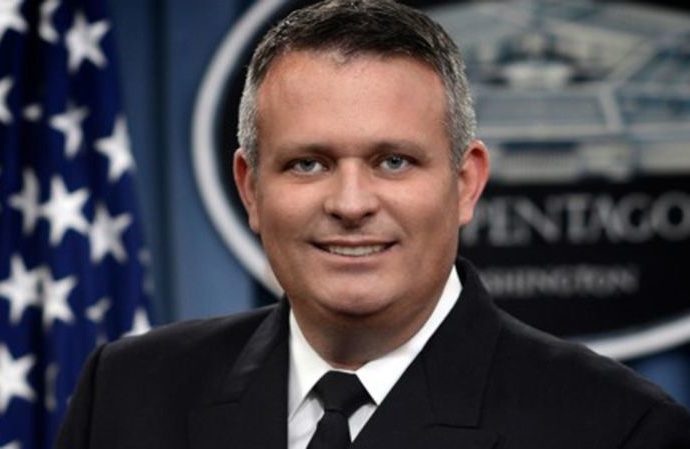 The U.S. has declared that the days of the Islamic State of Iraq and the Levant’s are numbered.

The U.S. Department of Defense, in a statement, said that the ISIL terrorist group was being pushed out of Iraq’s second-largest city of Mosul, Iraq and Raqqa, Syria, as the counter-ISIL forces were moving to liberate the territories.

Pentagon spokesman Navy Capt. Jeff Davis explained that the coalition forces were consolidating daily on their gains against the mindless terrorist group.

Davis said it was significant that counter-ISIL forces had reached the Tigris River and converged on the three axes from which the Iraqi security forces approached Mosul – north, east and southeast – and gained control of the eastern end of Mosul.

According to him, since Jan. 7, Iraqi security forces have continued to gain territory and consolidate those gains.

He said, “ISIL’s days are numbered. ISIL fighters are surrounded on all sides by a superior force, they’re facing resistance from within the city, and they’re being bombarded daily by coalition air and artillery strikes.

“And ISIL has no ability to reinforce or resupply. We do believe their days there, particularly in eastern Mosul, are numbered and they are beginning to realise it.”

While friendly forces have pushed their way onto the banks of the Tigris River in the vicinity of the southernmost bridge around Mosul, ISIL fighters over the weekend blew up the last of five bridges, the spokesman said.

He said, “We are now seeing some makeshift attempts to cross the river on foot using planks.”

He said on another bridge, where the span over land was taken out by coalition forces, ISIL was observed using a crane to move vehicles across the river, one by one in what Davis called a very “painstaking way”.

He said, “We’ve also seen them use slides to take cargo in boxes and slide them down onto the ground from the bridges that have coalition-damaged spans. All five bridges around Mosul are unusable.”

He said after occupying Al Salam Hospital in southeastern Mosul as a fighting position and storage facility for quite a while, ISIL has been forced out of the facility, Davis said.

He said, “We’re seeing continued signs of ISIL fighters having loss of morale.

“Many of them have not been paid in months; we’ve seen fewer vehicle-borne homemade bombs than we had previously in Mosul, and indications are that ISIL can’t respond to coordinated attacks on multiple axes.”

What Operation Inherent Resolve officials have seen as a lull in morale particularly from the east of Mosul are ISIL desertions and fighters leaving their positions, Davis said.

“It’s a sign of the fact that they recognise their defeat is imminent,” he said.

The residents of Mosul are increasingly putting up resistance, where people “are very quick to turn against ISIL to help drive them out, particularly when the enemy is close to taking territory,” Davis said.

In Raqqa, Syria, which ISIL proclaims as its capital in that country, counter-ISIL Syrian forces also are moving in on their axes of approach to retake the city from ISIL control, he said.

“Coming into Raqqa from two axes, the SDF (Syrian Democratic Forces) has cleared most of the northern axis in the north and from the northwest, toward the southern segment of the city, Davis said.

The Pentagon spokesman added that the SDF personnel are within four kilometers of the city and the Tabqu Dam on the Euphrates River.

He called both achievements “significant in isolating Raqqa”.

Islamic State days are numbered – US was last modified: January 10th, 2017 by Arinze Ago