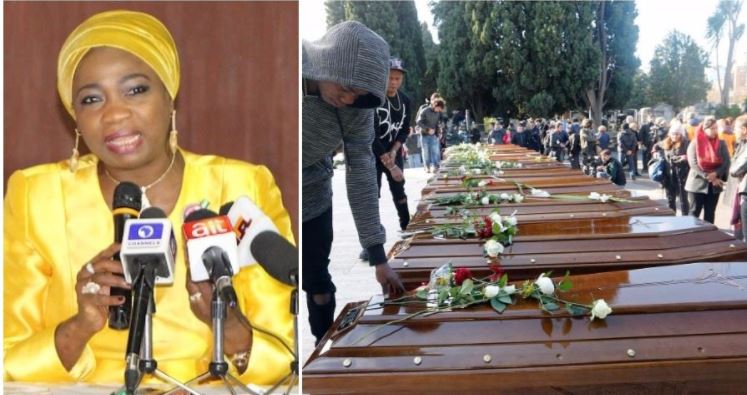 The Italian Embassy in Nigeria has apologized to the Federal Government, over the burial of 26 girls who died on the Mediterranean Sea.
This was confirmed by the Senior Special Assistant to the President on Foreign Affairs, Abike Dabiri-Erewa.
“The Italian Embassy has apologised for the mix up for dates in the burial of the victims of the Mediterranean tragedy. NAPTIP and other agencies will continue to work with Italy and others to stem the tide of irregular migration,” she wrote in a tweet.
Related: Burial of the 26 Nigerian Girls Killed in Mediterranean Sea (Photos)
The Italian authorities were accused of burying the 26 girls earlier than scheduled.
The bodies of the girls were found on a sinking vessel about two weeks ago.
Related: Autopsies Reveal What Killed 26 Nigerian Female Migrants in Mediterranean Sea
Reports suggested that they may have been s*xually abused before they were murdered for an autopsy result debunked those claims.
Italy Apologizes To Nigerian Government For Hurriedly Burying 26 Girls was last modified: November 23rd, 2017 by Arinze Ago