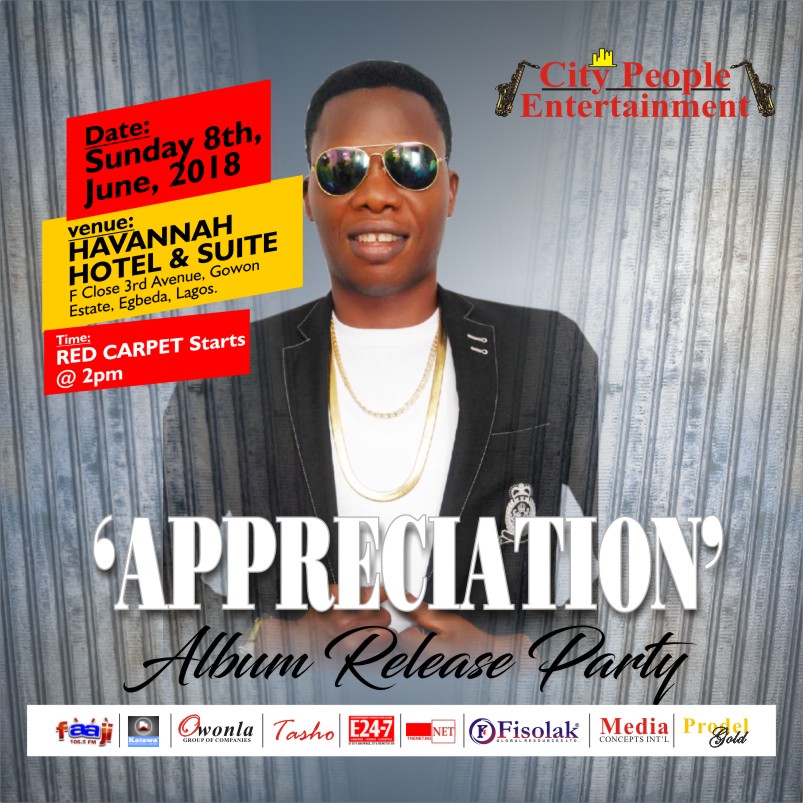 The glamour at the Havannah Hotel, Lagos was second to none on Sunday 8th July, 2018 as guests came in huge numbers to honour the popular gospel Juju artiste, Abel Dosunmu a.k.a. Mega 9’9 in the release party of his 12th album tagged “Appreciation”. A delightful ambience was created as guests were gorgeously dressed in white because it was an all white affair.

The event kick-started at exactly 4pm.

The 1000 capacity hall was filled to the brim as Aladesanmi Ibile, Moses, Dare Silver, Bayus welcomed guests with their hit singles. These four artiste are under the umbrella of Mega 9’9.

Bishop Ori Radio and Jimmy Jairo compered the event as the guests were thrilled at every of their jokes. They went as far as mimicking, Yinka Ayefele amongst many others.

Juju artiste came in great number to support their colleague in the industry. One worthy of note is Dele Gold. Dele transformed the sitting atmosphere into a dancing one with his sonorous voice and band as guests could not help but show appreciation on stage.

Dugbe, another Juju singer who is also a childhood friend of Abel Dosunmu popularly called Mega 9’9 sang to the admiration of many preparing them for Mega himself. Bashiru Adisa popularly known as Baba Gboin, a television presenter of the award winning programme ‘Mini Jojo’ gave the best of comedy. The interlude came at the right time as another popular comedian known as Baba Egun joined on stage. The rendering of Yoruba proverbs of Baba Egun will get any Yoruba person thinking. It was professionalism at its peak as Baba Gboin tries to correct Baba Egun in the comedy show.

Did we tell you that Vanessa Jones who is a hip-hop singer and dancer was there too. The amazing thing about her is that she is just 7. She took over the stage as she entertained the guest with her song and dance steps beyond expectation.

Shortly after Vanessa Jones, came the Mega Super Star. Mega 9’9 mounted the stage singing the first track of the album. He said since 2004 that he started his band, every album has been a hit back to back and that can only be God. The second track was dedicated to his loyal fans and sponsors through the years.

He said without God and his fans he would not be where he is today.

Lola Akande And Her Politics Of Imposition...