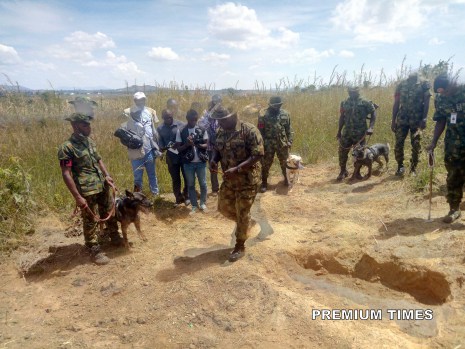 The Nigerian Army said it has discovered a shallow grave where a missing major general, Muhammed Alkali, was buried after he was killed.

The army said the body was later exhumed and reburied somewhere else by the killers, according to the information provided to it by some of the arrested suspects.

According to the army, the shallow grave was confirmed by four independent sources in the community and also by sniffer dogs.

Journalists who visited the area of the shallow grave reports that there is a distance of one kilometre between the main road and the location of the grave.

Mr Alkali was the immediate past chief of administration of the Nigerian Army. He was declared missing on September 3 when he was traveling from Abuja to Bauchi State. He is believed to have been killed by his abductors.

PREMIUM TIMES reported how the car of the missing general was found weeks ago in the community’s pond after it was drained.

A blood-stained T-shirt, a boxer short and a pair of shoes believed to belong to the general were found in the car.

Since the discovery of the car, there have been fears the military could attack the community in retaliation.

A day after the car was found, the army cordoned off the Dura Du community and arrested 30 suspects in connection with the suspected murder of the general.

Apart from the discovery of the missing car, two other vehicles were also recovered from the pond.

Following the arrest of the 30 suspects, residents of the community fled for fear of military action but the army pledged to conduct the search with respect for human rights.

On Friday, a major general, B. A. Akinruluyo, the General Officer Commanding, 3 Division, Rukuba Barracks, narrated how the shallow grave was discovered.

“Please note that four different sources not known to each other at various times took us to the opened shallow grave where the senior officer was earlier buried but subsequently removed,” he said.

“Furthermore, sniffer dogs that have been cultured with the personal effects of the senior officer led us to the same open shallow grave. That was the only grave we were led to by different people and sniffer dogs. We did not go to any other grave as the operation was carried out based on credible intelligence.

“Like I always say, the cordon and search operation is intelligence driven and that is why the operation has been conducted in line with international best practices and respect for human rights. This further explains why the (army) division did not clamp down on the entire community. Only the perpetrators are being targeted.

“At this point, let me reiterate that all the actors involved in this dastardly act who are still at large are known to us. All efforts are being made to get them arrested and be brought to justice as their photographs and personal details are with the relevant security agencies.

“The cordon and search operation conducted by own troops has really exposed the heinous crimes being committed by the few but fully supported and concealed by the entire community. I want to commend members of the public for their cooperation and still solicit for anyone with credible information on where the senior officer was reburied. It is the civic responsibility of the Dura-Du community to produce the corpse of the deceased senior officer and those who were involved in the killing of the senior officer.

“Finally, the division also wishes to emphasise its adherence to the principles and respect of human rights in the discharge of its constitutional roles. It further calls on everyone within its area of responsibility to remain vigilant and report any suspected breach of the peace to security agencies,” the major general said.

“I was never arrested for spending fake...