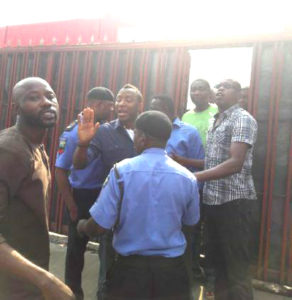 Sowore was arrested at his house in Lagos and moved to area F at Ikeja on Wednesday after Fatodu, lodged a complaint to police. The Police got a tip off that Sowore was in the state and stormed his house for his immediate arrest.

Lekan Fatodu, a journalist, had announced the development on Twitter, saying he facilitated Sowore’s arrest for “criminal defamation and blackmail”.

“I just got Sowore Omoyele of Saharareporters arrested for criminal defamation and blackmail and threat to my life and career,” he wrote.

Sowore later took to Facebook to narrate his own side of the story.

“I was physically attacked today by a gang led by Lekan Fatodu… he assaulted me before police officers at Area “F” in Ikeja in Lagos,” he wrote on Facebook.

“After the police intervened soon as I was attacked by Lekan Fatodu and his friends in Lagos, we were taken to the CP’s office in Lagos.

“Turns out he was in on this, he pulled out a supposed petition written by Lekan from his hat after that he became very hostile towards me and ordered that we be driven to State CID, at Panti in Lagos.

“It is very obvious that this was planned between Lekan Fatodu and the police. They offered him unbridled support as he continued attacking me in the presence of the police. I could have been I am familiar with this style of the Nigerian police. We are now being driven to Panti in Yaba res of Lagos”