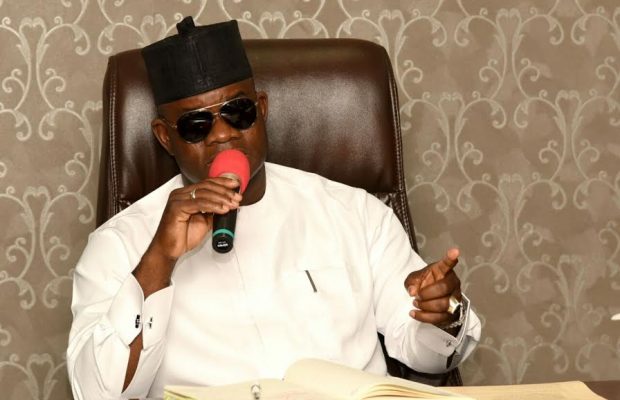 The People’s Democratic Party has expressed delight over the emergence of the incumbent Governor of Kogi State, Yahaya Bello as the All Progressives Congress (APC)’s flag bearer for the November 16 governorship election in Kogi State.

Recall that Governor Bello defeated eight other aspirants with 3,127 out of 3,596 votes to clinch the APC governorship ticket.

However, a statement on Monday by the Kogi state spokesman of the PDP, Bode Ogunmola, said the decision of APC delegates to hand Governor Bello a second term ticket would make it easy for the opposition party to win the governorship election.

The PDP claimed that a purported public resentment against Bello’s administration in the last three and half years would pave way for it to win the November election.

The statement reads in part, “It is a well-known fact that Governor Bello cannot win any local government, given his poor performance and the way and manner the resources of the state are being massively looted.

“His desperation to return is to save himself from going to prison over looted funds. That was why he had to spend hugely to get strong contenders disqualified.

“If he succeeds in fooling the leadership of his party and the delegates, we are confident that he cannot fool Kogi electorate who are victims of his monumental misgovernance.”

Kogi Guber: Yahaya Bello’s Emergence As APC Flagbearer Is Goodnews To Us – PDP was last modified: September 3rd, 2019 by Reporter