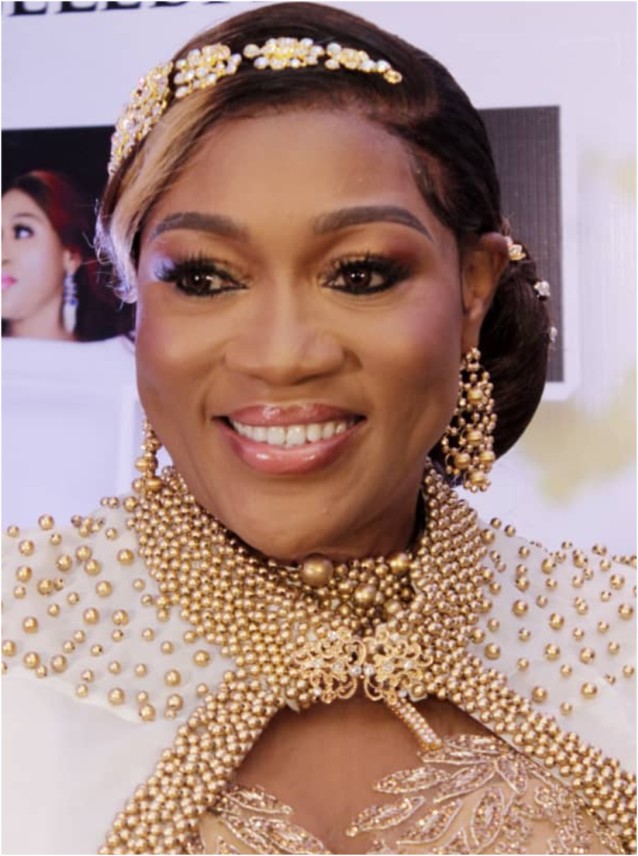 The party took place at The Bell Event Center, opposite Island Maternity, Campbell Street, Lagos. The hall which was draped in white chiffon was garnished with exquisite decor, lights and exotic flowers and it gave the hall a heavenly look. The ushers looked good also. They were dressed in orange outfits.

The Aso-Ebi came in 2 lovely colours. The first was a sequence champagne Gold lace and the second was a Teal blue sequence lace. And they all came with facilitators. All the beautiful ladies in Aso-Ebi wore their dainty looking facilitators and they all looked sweet and elegant. The table had white cotton covers with a touch of gold napkins.

The celebrant is a great lady of Style and on that day she looked sizzling. She was dressed in a white and gold dress, decorated with golden south sea pearls dancing majestically on her. She danced into the hall with her children. And other well-wishers joined in the dancing and celebration till she went on stage to take her sit on the royal chair placed there for her.

The MC, Rotimi Johnson did a good job as he laced the proceedings with lovely jokes. He kicked off the event by asking the celebrant’s friends, neighbours, work partners and children to come out, one after the other, to say one or two things about the celebrant. One of her seniors at St. Margaret, Ilesa came out and said a lot about Olanike. She said she admires her hard work and the way she carries herself and the kind of love she gives out to people around her.

One of the celebrant’s neighbours also came out to talk about her. He said every time he passes through Mrs Olanike’s house, he will always hear her praying and he was curious to know her because of her deep interaction with God and ever since he did, he has never regretted knowing such a beautiful soul like her. One of her business partners from Kano also talked about the celebrant. She said Olanike doesn’t discriminate and likes to commend people.

She said despite the fact that she is a northerner and Muslim, the celebrant who is a Christian treats her with love and she has remained loyal, and for her to fly down all the way from Kano to Lagos is to show how important the celebrant is to her. Her children also spoke about her, one after the other. They spoke about how lovely their mummy is and how they are grateful for having her as their mother and best friend, whom they can tell anything without judging.

Speaking about herself, the celebrant started by giving all the glory to God. She said she prays to God whenever she is troubled and when she wants God to answer her prayers quickly, she prays in her ijesha dialect and God answers her.

She said people do say you can’t get to meet God until you get to heaven, but she says she believes she sees God everyday in everyone she meets, in one way or the other. “I have met beautiful souls, angels in human form who were there for me when the world was against me and for this, I see God in every soul.”

She talked about the different phases she has gone through in life. At a point, she broke into tears and gave thanks to her friends, who stood by her and never for once left her to carry her burden alone. She spoke for 45 minutes. She also spoke about her siblings. She said they are 7 and she’s the last. She spoke about how they lost their 1st born and her daddy. She gave thanks to her parents for raising her well and giving her what she considers to be the best gift in life which is Education. She thanked all her aunties and uncles who raised her and gave her moral support.

She thanked all her guests who came out of their comfort zones to celebrate with her. She told all of them to stay till the very end to dance with her and enjoy the merriment. After her speech, she went to change into a lovely burnt orange iro and buba with a dazzling gele and ipele, with a tomato orange bag to tone it down. Music was by the very talented Wale Zion who kept all the guests on their feet till they began to leave one after the other. So beautiful and well packaged was the party that many of the guests were reluctant to leave.

READ ALSO: WHY I WANT TO BE THE NEXT OGUN STATE GOVERNOR – MODELE SARAFA-YUSUF