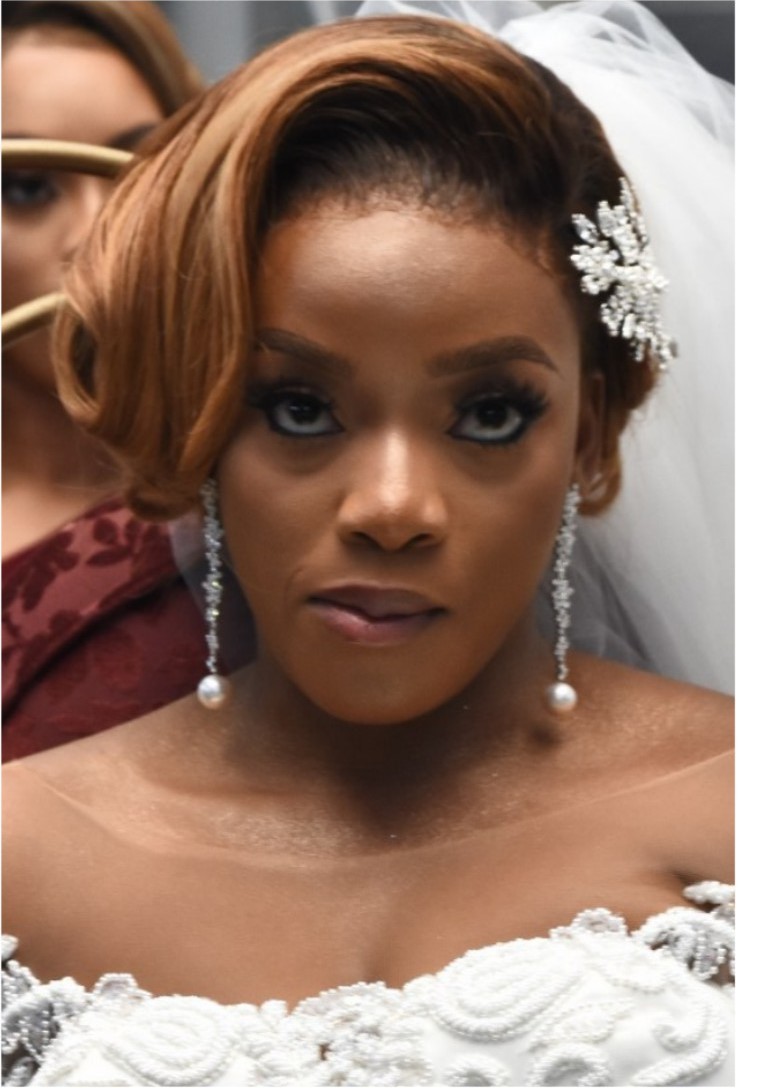 Saturday, 27th July 2019 will remain memorable in the minds of many top celebrities who attended the beautiful wedding between the children of 2 popular families, the Aboderin of Ibadan and the Iwuajokus from Imo state. The wedding had all the paraphernalia of the high society as it played hosts to many big celebs and all the side attractions of the wedding were overwhelming. Funmi Aboderin got married to her heartthrob, Uche Iwuajoku in a colourful wedding in Lagos. City people Society Editor, TAYO FAJORIN OYEDIJI brings you gists from the event.

The guiding light Assembly church, (GLA) in park view Ikoyi was where the solemnisation of the wedding took place. The service was presided by the senior pastor of the church, Pastor Wale Adefarasin and he was joined by 11 other officiating ministers. He coordinated all the service activities from a profession of vows, exchange of rings to the signing of marriage registry and presentation to the congregation. He charged them to be each other’s best friends.

Funmi and Uche are two happy children who showed they truly love each other deeply. They never left each other sides all through the wedding. Their wedding was also devoid of any ethnic culture despite they are from different backgrounds and ethnic group. Funmi is fully Yoruba, her dad, Dolapo Aboderin is from the popular Aboderin family, he is the son of the former Chairman of Punch newspapers Moyo Aboderin and her mum, Ololade Aboderin is a diamond merchant while Uche’s Dad, Sam Iwuajoku, a foremost businessman is from Imo State but his mum, Bolanle Oduntan is Yoruba. From their traditional wedding, white wedding to their reception and after-party showed they looked like a million bucks for their day. Funmi is a skincare expert who runs Orma skincare company. She had a BA Honours degree at Durham University and MSc from the London School of Economics. The groom is the executive director of Quits Aviation services FZC and Legend Hotel. He also schooled abroad.

It was a wedding that had a colourful bridal party who were numbered up to 25. The bridesmaids looked very beautiful in their Pink colour dress and the groomsmen looked good in their tuxedo suit. Most of them are kids of the rich celebs with the likes of Idris Ajimobi, the son of the ex Oyo governor, Abiola Ajimobi, also Kayode Bayode, the son of Ogun foremost chartered accountant, Late Olubode Kayode, Uyi Giwa Osagie, the son of Etisalat chairman, Akeem Bello Osagie, the Aboderins, the Durosaros, the Soetans, the Iwuajokus, the Odutola and Osakwe families.

If you don’t know you are being invited to a wedding ceremony and you found yourself at the reception venue of Funmi and Uche, you will think it was a Mother’s Day celebration. The hall was full to the brim of women from all walks of life. Women surely know how to party and party well and this was evident as they danced and danced at the party for long hours. They were seen dressed in the Aqua colour code for the day and most of them went with the luxury fabric, adorning the HOH lace.it was a very colourful gathering.

THE BILLIONAIRES TABLE WAS LIT

At the party was a particular table which was not devoid of exclusive and exquisite cognacs. It was a table where the BIG MEN sat. The groom’s father, Sam Iwuajoku pulled a big one as many of this big men stormed his son’s wedding to honour him. Sighted at the big table were Dangote Group chairman and richest man in Africa, Aliko Dangote, his friend, Chairman of Geregu Holdings, Femi Otedola, Chairman of BUA Group, Abdul Samad Rabiu, MD of Access Bank, Hubert Wigwe, Chairman of Zenith Bank, Jim Ovia,former Governor of Ekiti State, Niyi Adebayo, Skymit Motors boss, Tayo Ayeni, Oskar Ibru and others.

ABOUT THE ABODERINS ELITE CAUCUS

The families of the late founder of punch newspaper, Olu Aboderin are very prominent within the corporate and social scene in Nigeria and we have seen many of them taking up huge responsibilities in their chosen area of careers. In any of the Aboderins event, one thing you will notice is that they are very organised and their parties are not rowdy. Most of their invited guests are top celebrities in the corporate sector who played one role or the other at the wedding. Sighted were Chief Mrs Nike Akande who is from the Aboderin family, Lady Gbemi Smith and many others.

TITBITS ON THE COUPLES MOTHERS

Weddings are another emotional days for couple’s mothers because their children are detaching themselves from them. Despite it is their happiest days, they feel very emotional letting go. This was what happened at Funmi and Uche’s wedding as their mothers felt very emotional letting them go. Their mothers, Lolade Aboderin and Yeye Bolanle Oduntan looked beautiful for their day. If you look at them just at a glance, they tend to look alike, have some similarities, they are both fashionable, top businesswomen both fair and tall and in all, they know how to dance. They were extremely happy hosting many dignitaries at the event.

The strength of friendship is not determined by how close people are when the going is good. The depth of it does not also depend on how long they have known each other. When quarrels ensue and pride intervenes,, that is when we get the true measure of friendship. Africa’s richest man Aliko Dangote and his equally wealthy friend Abdulsamad Rabiu have both passed the test in flying colours. Dangote, the famous billionaire, and Rabiu, the silent billionaire, have been friends for years. And over the years, the two northerners have crossed the threshold of normal friendship to become true comrades in soul and spirit. But for a while, rancour and bitterness ensued from some conflicts of interest, leading many to speculate that they had gone their separate ways. But like life itself, solid friendship is full of surprises. While supporters of the Chairman of BUA Group and Dangote were fighting themselves in defence of their bosses, the two men at the centre of it had apparently reconciled in private, realising that nothing is as precious as friends that are closer than brothers. It was not until the birthday gig held by Femi Otedola in honour of Dangote’s 60th birthday that it became clear to the public that Rabiu and Aliko had mended fences. Kano-born Rabiu strolled into the occasion and chatted excitedly with the celebrant. They even took pictures together, leaving their mutual friends who had expected a standoff with a pleasant surprise. This same gesture was on repeat at this wedding as they were seen together chatting and taking pictures together.

Lagos society woman, Vicky Haastrup who is the Executive Vice Chairman of ENL Consortium was saddled with the responsibility of coordinating the cutting of the cake. She did it very well and called other family members to join the couple in witnessing the cutting of the cake. She also reeled out her closeness with the bride, Funmi who is like her daughter, she shares a close friendship with the brides mum, Lolade Aboderin. She is a product of the London School of Business, she enjoyed a successful career in NNPC before becoming the managing executive of the Port Terminal Operation of ENL.

The chairman of the day was no other than the couple’s fathers best friends, Bimbo Ogunbanjo. The president of the Nigerian stock exchange. He revealed how he became friends with the couple’s fathers over 30 years ago. He also admonished the couple to let God be their source. The chairman is well-grounded in the business world, he is the Otunba Bamofin of Erunwon, Ijebu Ode of Owu, Ogun State. He is one of the successful sons of foremost boardroom guru, Chief Chris Ogunbanjo.

HOW SOLID MEN GATHERED FOR THE COUPLES FATHERS

Majority of the men at the party came because of the couple’s fathers who has friends in all spheres of life. The bride’s father, Dolapo Aboderin is a silent millionaire who does not make noise, he is from the popular Punch Newspaper family, The Aboderins. He is the son of former punch chairman Chief Moyo Aboderin. Their circle of friends and older family friends came in full force to honour him. So also is foremost billionaire, the groom’s father, Sam Iwuajoku, he pulled a big crowd of big men as well. sighted were PDP governorship aspirant in Lagos, Deji Doherty, Skymit motors boss, Tayo Ayeni, the chairman of ENL Consortium, Prince Clement Hastrup, Chief Alex Onabanjo, Chief Bimbo Ogunbanjo, Oskar Ibru, Wale Babalakin, Deji Adeleke, Mr Ogungbe, Oba Francis Alao and many others.

DAVIDO’S FATHER, DEJI ADELEKE STEPS OUT WITH HIS RICH FRIENDS

If not for some society people who know music star, Davido’s father, Deji Adeleke, he might even pass you by at an event and you will not notice, He is extremely rich but he does not make noise about it. He rarely goes for social functions except for his church activities. He has many friends across the social scene especially his most trusted friend, Aliko Dangote who has cut the knack of attending A.list parties of late. He was at this wedding and give it up to the Adeleke’s family, they have the dancing gene in their family. He danced endlessly at the event with his rich friends.

THOSE WHO MADE IT HAPPEN

#thefucheure which was the wedding hashtag trended on all social media pages and it was because it was well planned and coordinated. The engagement and wedding ceremony took place on Thursday 25th and Saturday 27th at the same venue, Harbour Point event centre. The engagement planning was handled by Deola of 2706 events while the wedding décor and planning was done by Uche Majekodunmi of Newton and Davids.JOP and Atilary studio was in charge of photography, Satin and laces handled the bride’s engagement luggage. Pre-wedding photoshoot was styled by bridal chic and dress by Wakaddy official, makeup by iamdodos, traditional wedding make up was done by bibyonce, Gele by Taiwos touch, Her Aso oke was designed by deolasagoeofficial,2nd outfit, was by ruverodesigns and tailored by topefnr, Astoria catering limited, Hampton foods, Bimms24 supplied the Gele Aso oke of all guests and many others.

READ ALSO: MAKING CHANGE, ONE LAYER AT A TIME

MAKING CHANGE, ONE LAYER AT A TIME